Ten KDE 4 Tricks Worth Knowing About

Since I discovered just how great KDE 4 is a couple of months ago, I’ve been using it full-time and am loving it. In all that time, I’ve discovered a few tips and tricks that I couldn’t live without, and all of them are listed here. Some of these include an inline CLI, split folders, setting up a media keyboard and using advanced wallpapers.

Every so often, I’ll spot an article online that touts the “top” snapshot tools for Linux, and to my surprise, KSnapshot rarely makes the list. Granted, it’s bundled only with KDE (it can be used in other desktop environments as long as the KDE libraries are installed), but it’s quite powerful, and I’ve come to enjoy it more over any other solution I’ve ever used. For some distros, your Print Screen button will automatically launch KSnapshot, but if not, you can edit it to be so with the Application Shortcut Keys trick mentioned earlier.

There are a couple of reasons I love KSnapshot. One is because of the ability to time your snapshots. For example, if you need to snapshot something at a point during OS use when snapshots can’t ordinarily be taken (such as during the 3D alt-tab mentioned earlier), you can set it to take one after a certain amount of time instead. Then there’s also the ability to open up the snapshot immediately with one of your favorite tools, such as Gwenview or Gimp, without saving it first. 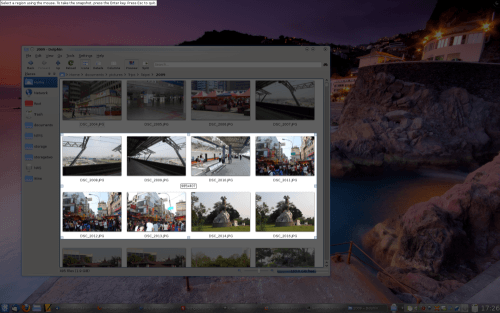 My favorite feature, though, is new with the version bundled with KDE 4. The “Region” capture mode allows you to freeze the entire screen, and then draw a box around the area you want to capture. What makes this feature powerful is that once you draw a box on the screen, you are able to adjust it afterwards either by moving it around or resizing it. When you are done, hit enter, and save the shot. This is a feature I use often, and I couldn’t imagine not having it now that I do.

One of the more common complaints from Windows or Mac OS X users trying to make the move to Linux is that their peripherals don’t offer as much functionality as they do in their respective OS. Logitech, for example, doesn’t have a version of SetPoint for Linux, so a lot of the special buttons on both its keyboards and mice simply don’t work. While the mouse situation is a bit tougher, did you know that you could potentially enable the special buttons on your keyboard without much effort?

For most people, finding this option isn’t easy, because it’s in a place where you’d least expect it. Is it under the Keyboard & Mouse section of the System Settings? No, that would be too easy. Instead, it’s under the Regional & Language (you can access the System Settings in the “Settings” sub-menu of the K Menu). Once in there, click the Keyboard Layout option on the left. You’ll notice a drop-down on the right called “Keyboard model”, and that’s where you want to look. 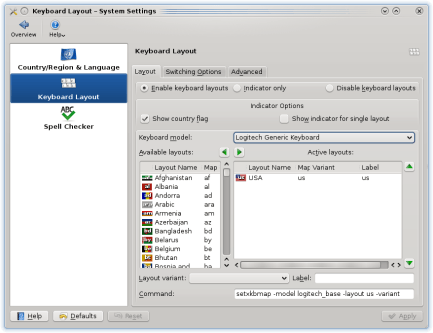 In that drop-down there is well over a hundred models listed, and if yours happens to not be, then you could probably choose the closest one related to yours and it work fine. I have an older Logitech media keyboard, for example, and it wasn’t on the list, but choosing “Logitech Generic Keyboard” opened up full functionality to me. The volume keys now control my primary audio card’s volume, the Calculator button launches KCalc, the Mail button opens up Thunderbird and so forth. Note that to tie these buttons to your favorite applications, you will have to use the shortcut keys feature mentioned earlier.

Setting up this kind of functionality under Linux used to be a pain, especially for those who aren’t total tech geniuses, so this is one area where KDE 4 makes life just that much easier.

So, it seems weird to call anything related to a desktop wallpaper a trick, but in KDE 4, there is a lot of new functionality here that can make setting a simple wallpaper a lot of fun. One feature I like quite a bit is “Slideshow”, which allows you to select a folder full of wallpapers along with a duration, and KDE will automatically shuffle through your collection at the given interval. It’s not an abrupt switch, either, but each wallpaper fades into each other at the transition, which looks cool if you catch it.

The fun doesn’t end there, though. Another option is “Virus”, which essentially eats your desktop with some disgusting virus until it’s completely overtaken. As it begins, you can start to see distortions on the desktop, and it really does look like a monitor defect, until it continues on and engulfs the rest of your innocent wallpaper. Need a real example of what I’m talking about? Look no further than here. 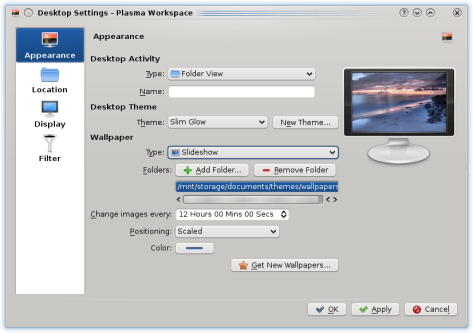 One of the coolest options here though is Mandelbrot, which displays the famous fractal shape on your desktop, and continues to glow for as long as you are using the PC. You can also pick and choose the colors you want to use, as the white in the center is probably too bright for most people. How about a solar eclipse Mandelbrot? Another wallpaper option is Weather, but it’s limited in customization.

Reverting to a Proper Desktop

One of the major complaints I had with KDE 4, even back when I wrote the “KDE 4 Isn’t Too Bad, After All” article is the total lack of a real desktop. Rather, shortcuts on the desktop are converted to Plasmoids and so forth. This left me with a feeling that the desktop was totally bloated, and it was still my main complaint about the environment. Fortunately, thanks to one of our forum posters who commented in the thread for that article, I found out I was wrong, and boy, am I glad I was. 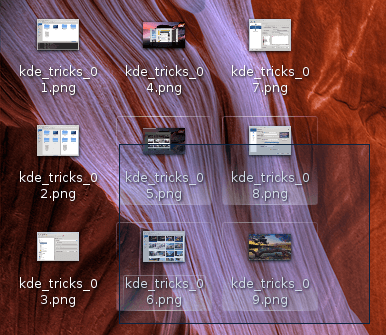 As it turned out, in the exact same section where you set your wallpaper, there’s an option for “Desktop Activity”, with the two options being “Folder View” and “Desktop”. The latter is the default, where icons and shortcuts are effectively Plasmoids, but the former is where things return to normal. If you choose it, your desktop will be usable as a regular desktop, where you can handle files and folders right on the desktop itself, rather than inside of a “Folder View” Plasmoid.

If you take advantage of desktop widgets, don’t worry… using the Folder View desktop doesn’t affect the ability to use any of those.

A couple of years ago, Novell implemented a new feature into its SUSE distribution. Called the “Kickoff Menu”, it replaced the old-style KDE menu that for the most part could be compared to the old-style menu system used in older Windows’ OSes. The goal was to give people a more creative menu, and one that would allow you to search for an application with a search box up top. Personally, I couldn’t stand the new menu, so I shrugged when I saw it implemented as the default menu system with KDE 4. 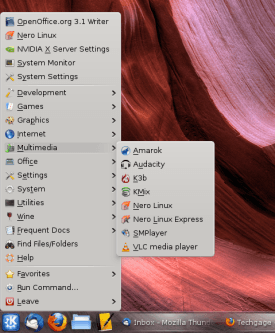 Fortunately, a tip I carried away from my previous testing with SUSE was that the old menu style wasn’t removed entirely, but just hidden to some extent. To get it back, you just need to right-click the K Menu icon (first unlock widgets if they are enabled), and then use the option to switch to the classic style. This is a very minor trick, but if you are one of those who still isn’t aware that the option exists, then chances are you’re going to appreciate knowing about it.

This “trick” wraps up all I had for this article, so I hope that you learned of at least a couple new techniques and features you weren’t aware of before. Some of tricks mentioned above aren’t that much of a secret, but there are still a lot of people who may not realize they exist. I’m a power user, and when I think of how much time I wasted not realizing that the desktop could be reverted to an old style, I just can’t believe it. So, some are more obvious than others, but all are very useful if you can take advantage of them.

Have some tricks of your own that you want to share with the world? Discuss them in our thread linked to below!