If your butt is left hurting as a result of your chair instead of getting pwn3d by n00bs, then today’s look at the Tesoro Zone Balance gaming chair is for you. We take an in depth look at each of the components and features of Tesoro’s first offering in this market segment, then run it through several weeks of testing that we can really get behind. Our review is better than our humour, so read on!

Testing a gaming chair is a tricky ordeal because prospective buyers come in all shapes and sizes.  My build is fairly tall and lanky at 6’3″, although I have started to pack on the winter weight as hibernation draws near, putting me at about 220lbs.

Based on this, as well as my current desk setup (standard desk, single monitor, etc), not to mention my personal preference, the below information is simply what I experienced while sitting in the Zone Balance for a significant amount of time.  This includes writing this review, and gaming, but also for several 8 hour shifts as I use my skills to pay the bills at my day job, followed by some R&R while on vacation for the holidays.

Overall the Zone Balance was quite comfortable.  The padding in the seat cushion and back is quite soft, but is supportive enough that it doesn’t appear likely to stay compressed any time soon.  The seat cushion on my old, generic chair became flatter than a prairie pancake within a week, but the Zone Balance remained soft and springy.

A common complaint with some gaming chairs is that they tend to be too restrictive because they wrap around the user.  This seems to be done mostly in the legs and hips, as well as at the shoulders, and those who are stockier and/or have broader shoulders have complained that this design simply isn’t comfortable. Luckily, the Zone Balance didn’t seem to do this in either place, even though the seat cushion comes up on the side of the legs somewhat.

With my frame there wasn’t a lot of extra room, but it wasn’t snug or uncomfortable in any way, and the seat back did not even come close to wrapping around my upper arms or shoulders.  Instead, the slight contour simply supported them, allowing for unrestricted motion.

The lumbar support cushion felt out-of-place at first and seemed as if it was pushing me out of the chair, but after some perseverance it started to flatten somewhat and now feels quite comfortable.  The head support however felt great as it sat at my neck and supported my head from the base of my skull.

The seat height can be adjusted up to a maximum of 8cm of extra lift, which should prove sufficient for most users with a desk of standard height like mine, which is about 76cm.  The Zone Balance also allows the seat cushion to tilt back by pulling the height adjustment lever out, and the tilt tension can be adjusted with the large dial underneath to make it easier or harder to tilt.

There’s a good degree of motion as the seat tips back quite far, however, the seat cannot be locked while tilted meaning the user will continually have to push backward, and even with the tilt tension at the lowest setting, tilting requires enough force to cause the chair to roll back.

Like a lot of other gaming chairs, the Zone Balance reclines all the way back to 180 degrees.  This was very carefully tested to avoid flipping over backwards, which is what we were fully expecting. At no time did we feel like there would be an unscheduled trip to the floor.  While we think having a chair that reclines 180 degrees is a bit silly unless you have your monitor mounted to the ceiling, some might make use of it. 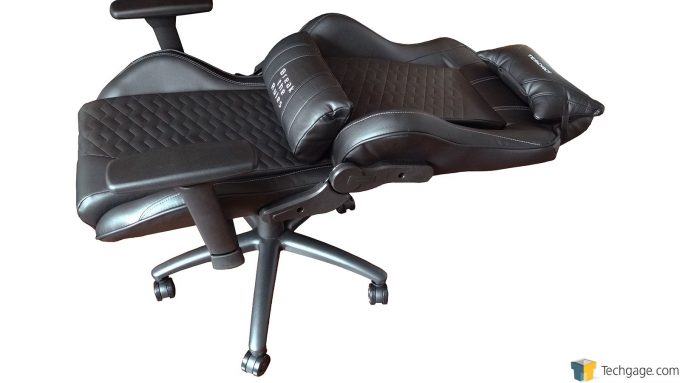 Switching to the multi-directional arm rest adjustments, users should again be able to find the perfect position.  While writing this review I found that once the height was set based on my desk, I was good to go. Once my body was centered in front of the keyboard, being able to turn the arms rests inward helped, as it brought my hands closer together on the keyboard, making my forearms angle inward as well.  When it came to gaming, I simply rotated them to the center position since I was now centered between the WASD keys and the mouse, meaning my forearms were pointing straight ahead.

One thing that you’ll definitely want, and this should apply to just about all chairs with casters or wheels, is a plastic mat to protect the floor.  While sitting in the Zone Balance we tried to make a wide circle using only the hips (it’s all in the hips after all), and found that it didn’t change direction as fluidly as the old cheap-o chair.

We also noticed some minutely deeper scratches on the mat that weren’t there prior to testing the Zone Balance.  Perhaps this is simply a case of a few rough edges on the wheels that will flatten or wear down over time, but the resistance when changing directions is noticeable.

As far as construction goes, the Zone Balance feels very solid, in part thanks to the steel frame in the seat cushion and seat back, and leaning hard on the arm rests yielded very little flexing and movement. However, over the course of our three weeks of testing the chair, it developed a bit of a creek when shifting weight side to side or back and forth.

The chair still feels nice and solid, but it certainly became noisier.  Depending on how much movement is done, it could become a bit annoying for some users, especially those who need silence while they record or stream video.

Only time will tell how well this chair will hold up over the coming weeks and months. Perhaps a bottle of lubrication will be in order.

We’d like to reiterate that the above is what I experienced while using the Zone Balance, which could differ completely from someone else.  We recommend checking reviews from others with a similar body type, or finding a retailer or even a friend that has one setup so that you can test it out for yourself.

So, let’s answer a few questions before we wrap up this review.

Is the Tesoro Zone Balance better than a cheap, $75 chair from the office supply store?  Absolutely.  Compared to those chairs, which likely feature minimal padding and adjustments, sitting in the Zone Balance is like a little piece of heaven for your backside.

The foam cushioning is soft without being too soft, and the level of adjustments available should allow most users to set up the chair perfectly to match their environment after a little trial and error.  It’s rigid, well constructed, and in my opinion it simply looks good.

It’s modern without being too out there, and the black and white, and black and red versions look especially good.  A special kudos to Tesoro for not going too bonkers with the branding as well.  For some, less tends to be more, and remaining modern yet understated can go a long way. 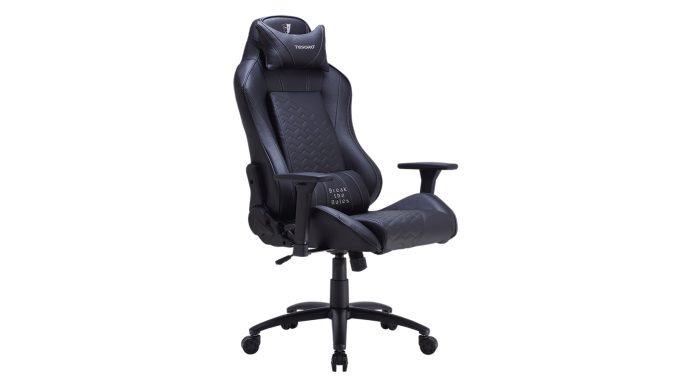 Will the Zone Balance revolutionize your gaming experience?  It’s doubtful, but it should afford more comfort during long sessions than most generic chairs.  If you truly need a chair that will make you feel as if you’re sitting on a cloud, you’re likely to pay two, three, or even four times what the Zone Balance costs.

The word balance in the product name is actually quite appropriate, as this chair seems to offer a nice combination of the core features; the generic office chair and some of the higher-end features available on some ridiculously priced chairs, providing a good middle point.

Is the Zone Balance worth the roughly $210 USD price tag?  That depends on how much time you spend at the computer; whether you need additional padding beyond what a generic office chair usually affords, as well as anything else that is important to you personally like adjustability.

Looking at other gaming chairs being sold by one major online retailer, it seems that the Zone Balance occupies the upper-middle area of the price range.  From a dollar and cents standpoint, it appears that it is worth the investment, but without other chairs to compare it to, we can’t say whether the Zone Balance excels or falls behind in any one area.  If we look at it for what it is, it’s a solid gaming chair that’s a big leap forward from a generic office chair.

Overall, Tesoro has done a really good job with the Zone Balance.  From comfort, to features, to aesthetics, to even the price tag, it should fit the bill for most users who are looking to upgrade their seating situation.  If it could be tweaked to cover some of the points in this review, we feel that it would be a very hard chair to beat across the board.