On the lookout for the best cooling system and greatest power supplies for your money? We’ve got you covered. Our cooling guide will help you find exactly what you are looking for and then we top it off with a recommendation of three stellar power supplies.

Two things that every computer needs is sufficient cooling and a rock-solid power supply. Our resident cooling & PSU guru Matt Harris is not going to give off exact cooling products to look for, but rather school you on what you should be looking for when making a purchasing decision. In addition to that, if you are looking for a PSU that won’t let you down, the next page has got you covered!

I’m looking at three forms of CPU cooling and the associated gifts for your geek. First we’ll take a look at the top of the line cooling (aside from liquid nitrogen) and that’s phase change.

Phase change cooling is called this because it requires an inert gas that is compressed to the point of becoming a liquid. During this compression the liquid is heated and cooled by a set of condenser coils. The liquid is then allowed to go back to a gaseous state and in doing so it drops in temperature.

The change from liquid to gas happens in an evaporator head which is mounted to the CPU. This pushes the CPU temperature well down below freezing. Now, there are not a lot of commercially available phase change systems on the market, actually as far as I am aware, there’s only one mass produced unit available in the US/Canada. That’s the Vapochill by Asetek. 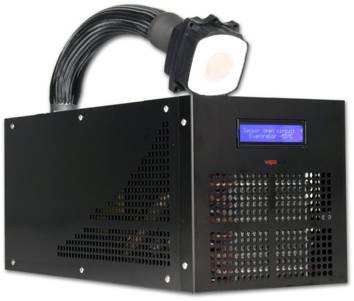 The stalk requires the user to cut a hole in the bottom of their case to allow it to come up through.

The case mounts atop the unit and they screw together essentially making it a single unit. This allows the PC to retain some semblance of portability.

Now, these setups aren’t cheap (around $800 and up) so they fall under the heading of "money is no object" but the performance gains are outrageous. As of this writing the Vapochill is the only mass produced unit but there are some choices aside from them.

You can go to Under The Ice.com and buy the parts to build your own (or for the geek in your life to build theirs if they have the know how) or contact them for one off units. Be aware that it would most likely be a gift for after the holidays since they need three weeks lead time. OCZ is rumored to have a more affordable phase change unit in the works but don’t go holding your breath, it’s been two years since they announced their unit and it’s yet to hit store shelves.

Moving along we come to the more affordable cooling (and more readily available) which is water cooling. Water cooling consists of (bare basics) a pump (DC or AC powered), CPU block, tubing, clamps, a reservoir or "T" line (a T fitting inserted into the pump’s input tubing and capped with a fillport) and a heat exchanger commonly known as a radiator.

Water cooling is available as DIY (Do It Yourself) setups or DIY grade kits which include everything needed to set up the water cooling and then there are all in one setups which we’ll be overlooking due to the fact that they’re limited to the sorts of upgrades and offer cooling marginally better than middling air cooling. If you’re buying your geek a water cooling setup be aware that there are many things to consider. The type of case they’re using is important, can it accommodate a radiator? Multiple radiators? Will it have to be an external radiator? Is silence golden? 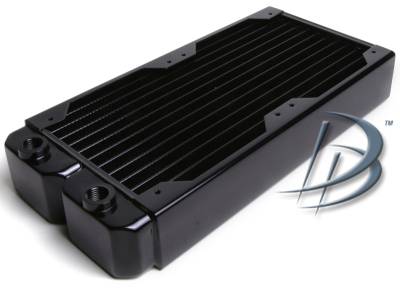 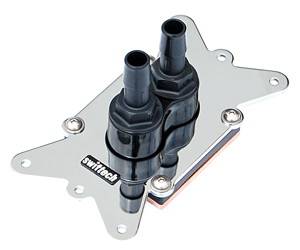 Water blocks are what exchange the heat from the CPU with the cool from the water. There are three major players in the US and they’re D-Tek, Danger Den and Swiftech. Right now D-Tek and Swiftech are the industry leaders as far as pure performance goes. They all also make GPU blocks for graphics chipsets and motherboard chipsets.

As of the time of this writing, Danger Den is using older designs from 2003 for their CPU blocks, since the time that those blocks were produced (well, designed since they’re still being produced) there have been major leaps in water block designs. The existing Danger Den designs are fine for single and dual core CPU’s but not so good for quad core. Think about this when making your purchase. 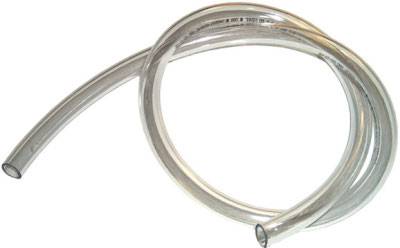 Tubing is what ties all the parts together. Clamps hold the tubing on the barbs on the various parts to prevent leaks. A very important thing to consider is the size of the barbs (nipples for the tubing to attach to) that the parts you’ve ordered come with. If the pump you’re buying has 1/2 barbs then option for 1/2" barbs on everything and order either 1/2" I.D. (inside diameter) tubing or 7/16" I.D. tubing.

Make sure that the upper range of their adjustment is greater than the O.D. of the tubing. Generally there will be a range of sizes the clamps cover, make certain to check that. When buying the tubing get about 15 feet to insure that there’s plenty in case a measurement is off or something gets added into the loop down the road. 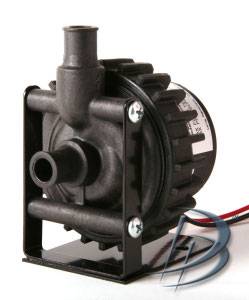 The pump is the heart and soul of the water cooling loop. A strong pump is preferable over a weak one. The strength of the pump is measured as "head". Head is the capability of the pump to push a 1" column of water vertically. So a pump with a 3 meter head rating will push a 1" column of water 3 meters vertically before stalling. The most popular enthusiast pumps are the Liang built D5 and DDC. The D5 has native 1/2" barbs, is rated for 3m of head and is 12V powered. The DDC is smaller, rated for around 5m of head and features 3/8" barbs. Like the D5, it too is 12V powered. 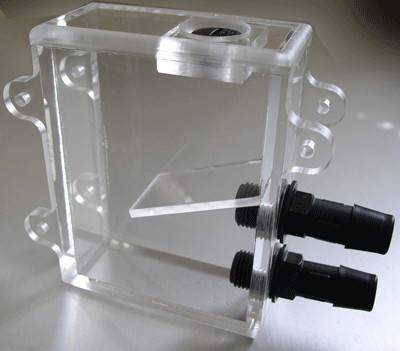 Reservoirs come in all shapes and sizes, from tubular acrylic designs to acrylic 5.25" bay mounted reservoirs to the Swiftech Micro Res. The best think would be to fish around and find out what your geek likes the best. It’s best to avoid a reservoir made of aluminum. Mixed metals make for a bad combination as it speeds up galvanic corrosion unless steps are taken to arrest it.

When you buy a loop for your geek make certain to buy coolant. A good Ethylene Glycol based coolant is the best. Avoid "water wetters" and dyes as they tend to separate out of the water and cause gumming in the parts. Also make sure to get distilled water, tap water might be fine for drinking but it contains flora and fauna that can cause issues in time.

Also, if you’re considering a kit, make sure that it meets the needs of the geek in your life as well as yours. You don’t want to buy him or her something that will make hanging out near the PC a shoutfest. For a good selection of DIY parts and enthusiast geared DIY level kits you can look at places such as Petra’s Tech Shop, Frozen CPU and Crazy PC.

If your geek has an overwhelming fear of the water then look to air cooling. The big names right now are Scythe with their Ninja and Infinity, Thermalright with their Ultra 120 Extreme and OCZ with their Vindicator to name a few. These coolers all share a few things; large 120mm fans, copper bases, copper heat pipes and aluminum fins on those heat pipes.

When shopping make sure to do your homework. Look on the site of the MFG. that you’re considering to look for compatibility charts. Make sure that the cooler you buy for your loved one’s PC will indeed work on the motherboard they’re using. Make sure to consider the overall height to insure that it will fit within the case. 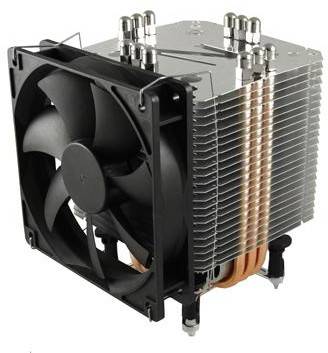 Most of all keep your ear open and listen to the geek in your life, if cooling upgrades are something they’re interested in you can catch tidbits of what they’d like in casual conversation. Use what you glean there and the pointers I’ve given you here to find the perfect gift for the PC afflicted in your life.