by Matt Serrano on December 17, 2007 in Editorials & Interviews

Our Gift Guide continues with an exhaustive look at the entire spectrum of available video cards for all price-ranges. On top of that, we also give our top five list for monitors which range from the reasonably priced to the ultimate drool-worthy. No matter your budget, we have you covered!

It’s been a rollercoaster year for the video card industry – for our emotions, that is. For now, NVIDIA’s G80-based GeForce 8800 Ultra still holds the performance title, but AMD fought back in a big way in the lucrative upper mid-range category with their new Radeon HD 3850 and HD 3870, two reasonably affordable high-end cards we feel we can finally recommend from AMD’s lineup – leaving the video card war looking less like a one-sided slugfest and more like an even match-up.

The spirit of competition is evident in our 2007 video card gift guide – in every major price category, we’ve got at least one offering from both AMD and NVIDIA, from the most affordable cards to the most extravagant – to say nothing of multi-card solutions. When it comes to high-performance parts in a fast-changing industry, it’s easy to see why many holiday shoppers would be a tad intimidated at the prospect of picking up a new video card for that special enthusiast on their list. However, after a quick perusal of our 2007 holiday recommendations, you’ll be well-armed to purchase a gift that won’t immediately be taken back to the store.

These are cards that can usually be found for under $50, but be advised – you’ll have to dial back your in-game settings quite a bit if you want to do any gaming at all with them. If you’ve got a budding enthusiast in the house who’s ready to build his very first PC, but you’re cash-strapped, these cards can still get you by until you can afford something else – and they’ll play World of Warcraft, which still counts for something. These entry-level cards also make great companions for an inexpensive home theater PC. Both these cards feature onboard HDCP, which means they’ll be fine for playing back your Blu-Ray or HD-DVD titles to an HD monitor.

GIGABYTE GV-RX24P256H (Radeon HD 2400Pro, 256MB) – This card features a large, passively-cooled heatsink that cools both the GPU and memory, which means it’s an excellent choice for systems where any increase in noise is to be avoided. Most HTPC cases nowadays can support full-height video cards, so you’re good to put this in a media PC build as well. It’s also got a generous 256MB frame buffer on board. 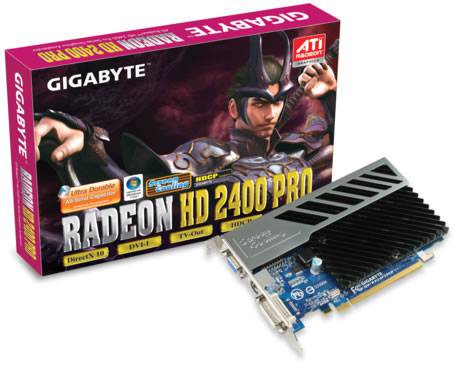 MSI NX8400GS-TD256E (GeForce 8400GS, 256MB) – This low-profile card is perfect for home theater PCs, with its onboard 256MB of memory and the ability to capture another 256MB from your system RAM for a full 512MB of frame buffer, thanks to NVIDIA’s TurboCache technology. 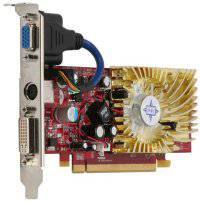 If you’re building a new system for occasional gaming duty, or upgrading an older one, these cards will put you in the sweet spot – if you’re not too much of a stickler for performance, and if you don’t mind dialing back the settings a bit. If playing games is a substantial part of what you do with your PC, I recommend reading ahead to the ‘Midrange’ category, however.

HIS H260XTF256DDN-R (Radeon HD 2600XT 256MB) – While it’s true that you can get 512MB Radeon HD 2600PRO cards in this price range, our opinion is that overall, you’ll be happier with the faster RV630XT GPU in a HD 2600XT card, even if you’ve only got 256MB of frame buffer to play with. If you’re driving a large monitor (bigger than a 22″), you’ll want a card that’s got more memory, but for most rigs this HIS card is the best you’ll be able to do in the AMD camp for the given price bracket. 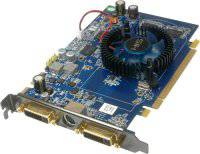 This card is based on the faster version of the RV610 GPU, and packs more of a punch than its ‘Pro’-branded rivals. Like the XFX GeForce 8500GT card listed below, the Sapphire card also has a large passive heatsink that dominates most of the card’s surface, and provides noiseless cooling. Being an HD2400 card, it may not be the top choice for gaming at this price level, however. Still, it’s a fantastic pick for your next HTPC. 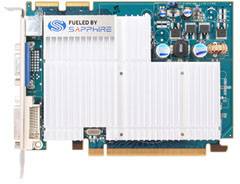 Leadtek PX8600GT TDH GDDR2 (GeForce 8600GT 256MB) – This Leadtek card is fairly Spartan, but it’s the cheapest worthwhile entry you’ll find into a GeForce 8600-series card. We’ve never been incredibly impressed with Leadtek’s offerings in the past, and this card only features GDDR2 memory – in fact, we’re only including it here to show that you can, in fact, get an 8600GT in this price bracket, though expect some cost-cutting measures.

XFX PVT86JUAHG (GeForce 8500GT 256MB) – This 8500GT-based card features 256MB of onboard video memory, and a beefy passive heatsink – which means no noisy fan, and no potential failure point. We’ve long been fans of XFX products, and the company provides excellent support, should you encounter a few hitches along the way. In addition to light gaming, this card would be a great choice for a HTPC, thanks to its passive design. The reason this card made it into our lineup, however, is the fact that you can grab it for about $75 in most cases. 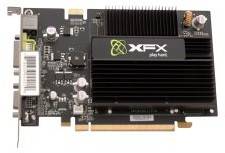 This broad category encompasses the majority of enthusiasts, and is generally the most popular category of products, where manufacturers make their real money, and the number of different offerings in this category from either GPU camp is evidence of this. Mid-range cards generally provide acceptable performance in gaming, functioning well at ‘medium’ settings in the very latest games while providing playable frame rates. If you do some regular gaming, but it’s not the bread and butter of your computer use, look here for the products that will best suit you.

Sapphire 100213 (Radeon HD 2900GT 256MB) – This card shares the same RV600XT GPU as the original fire-breathing HD 2900XT cards, but uses a scaled-down 256-bit memory bus, as well as a half-size 256MB frame buffer. It just about busts our mid-range budget category at $149, and requires twin PCI-Express power connections, but it’s as much performance as you’ll be able to get your mitts on in this price bracket from the red team.

PowerColor 26XT512M/D3HDMI (Radeon HD 2600XT 512MB) – Coming in closer to the middle of our midrange price bracket at $129 is PowerColor’s 512MB powerhouse, based on the Radeon HD 2600XT GPU. Its main advantage is its massive frame buffer, which will help this card drive huge monitors. It also features a quiet dual-slot cooling solution. 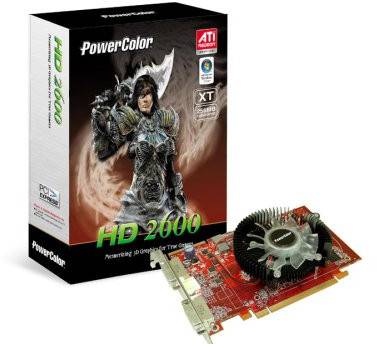 ASUS EN8600GTS/HTDP/256M (GeForce 8600GTS 256MB) – In our top midrange card recommendations for both Radeon and GeForce cards, we’ve chosen to forego a big frame buffer in favor of a more powerful GPU. While $150 in this category will also get you a 512MB 8600GT card, the significantly faster 8600GTS GPU of this card will place more eye candy within your reach. It’s also got a double-slot, low-noise cooling solution. 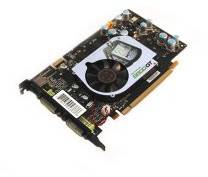 On our next page, we will continue with a look at both our gamer and AGP options.