I’ll be reviewing the Antec P70 on a few key criteria: Ease of system installation; cooling performance; a subjective evaluation of its noise output characteristics; and a few miscellaneous subjective observations and comments about the chassis and its design and features.

Before proceeding, here’s a look at our test system. Observant Techgage readers might notice a few changes with the test system’s configuration. The test chassis necessitated these changes.

Before I installed the test system into the P70, I gave it a good look. My pre-build recon revealed that there actually is only one place in the chassis to mount the test system GPU’s radiator: the rear exhaust fan position. Unfortunately, there are several problems with this. First, the test system as configured actually will need the rear fan to exhaust the hot air from inside the chassis.

Second, the AIO cooler’s tubing simply cannot bend correctly and safely if mounted at that position. The tubing will either kink or will foul one of the test system’s CPU cooling fans. Consequently, I decided to not use the GTX 680 in this chassis test. I could have reassembled the stock cooling for the GPU, but given the fact that I’d have to reinstall the AIO cooling set-up for future chassis reviews (I’ll be jumping straight into another one after I’m done with the P70) I decided it simply wasn’t worth the hassle.

A third problem presents itself when you consider that some systems might require more than one radiator. What if your system has AIO coolers for both its CPU and its GPU? Finally, even if your system only requires one radiator, this chassis can only accommodate one thin 120mm radiator.

This serious limitation in radiator mounting options is an ominous black mark right at the onset for this Antec.

Installing the test system into the P70 was frustrating. The lack of space inside the chassis is but one of its problems. It shouldn’t be difficult to manipulate a screwdriver when you’re installing a motherboard, but given the P70’s tight quarters, unless you have a driver with a long handle, you’re likely to bash your hands all over. You (hopefully) won’t get cut and bleed all over the mainboard, but you’ll probably curse the chassis and its designers. I don’t have particularly large hands, but the P70 made me wish I wasn’t built like a fullback.

And before I register yet another complaint about the P70’s interior, here is a photo of the test system installed in it. 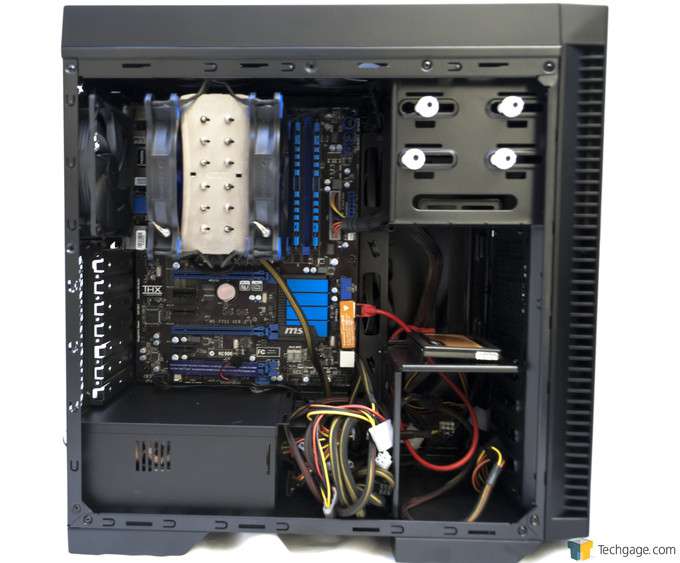 This shot shows another one of my big complaints about the P70: It’s nigh impossible to do a proper job at cable management inside this thing. It’s not just the lack of space inside; it’s also a matter of how the available space is distributed. The following photo illustrates this point. 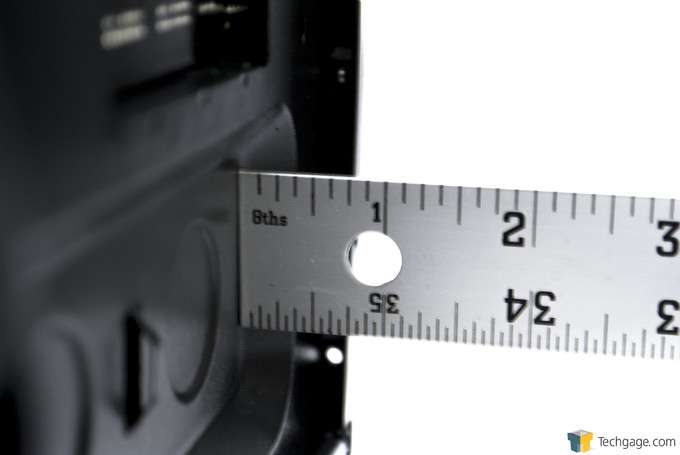 I literally had to rebuild the test system three times just to be able to close up the side panel, with the solution being simply not using the back side of the motherboard tray for any power supply cables. Consequently, you see a bundle of cables taking residence just in front of the power supply. Also, because I didn’t couldn’t have any power cables on the rear of the motherboard tray,  I had to route the 8-pin CPU power cable on top of the motherboard. Now I know I could have used a PSU with modular cables, but I chose to use my non-modular PSU to make a point about this chassis’ ridiculous lack of interior room.

At least I didn’t have to swap CPU coolers. The Havik 140 just fit inside due to the bulge on the left side panel.

The list of niggles doesn’t end there, unfortunately. You can only mount one SSD in the P70 sans case mods; the SSD sits on its spot on top of the hard drive cage, secured on one side by a pair of extruded metal “clips” (nothing more than bent metal pieces that fit inside the holes on one side of the SSD) and by a pair of screws on the other side. It’s a very crude retention system. I’d rather have my 2.5″ drive secured completely by screws than the kludge solution Antec provides. The drive cage is exclusively for 3.5″ HDDs; its drive rail system was modern about ten years ago, but really is junk now. I mean, users want to have the option to install 2.5″ storage devices in the hard drive cages too. Can’t really do it with the P70.

To be perfectly honest, I don’t want to keep on talking about the P70’s big issues, so let’s switch tracks and see how it does in the thermal performance phase of our review. Per usual, I’ll use OCCT to generate maximum CPU temperatures, as well as keeping the room ambient temperature at 72°F/22.2°C. Also per usual, I will test the P70 without any additional fans fitted to it. However, because there is no discrete GPU in the test system, we’ll skip the GPU maximum temperature test. 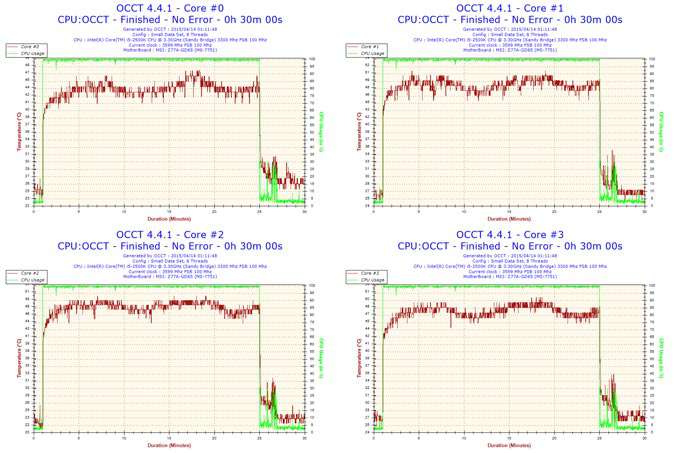 How do we explain this performance? Honestly I’m a bit mystified, but here are some details that might point to possible answers. First, the P70 was tested with all three of its fans on “High” via the trio of fan speed switches on the I/O cluster. Second, all three fans were set to exhaust; that’s how they were configured by Antec. This suggests that the absence of fans in the front intake positions don’t hurt this chassis’ thermal performance at all. Third, all three fans are in very close proximity to the CPU socket. Perhaps this very small distance accelerates thermal dispersal.

Whatever the reason, Antec has done a great job at ensuring the P70 can cool your system. Color me impressed. HUGELY impressed, even.

Another impressive thing about the P70 is how it keeps your system quiet. Even without any sound insulation in the side panels, and even with all three fans on at high speed, I couldn’t hear the test system at all. Well done, Antec.

In terms of overall build quality, though, well, I’m less than impressed. I already mentioned the cross-threaded standoff; another indication of sub-par build quality is in the thinness of some of the P70’s panels. Specifically, the PCI expansion slot area bends far too easily; the same can be said of the side panels. In fact, putting the P70 on its side with its side panels on is a terrible idea. The bulges on those panels will cave in, as I found out to my chagrin. You can massage them back into shape, but good-quality side panels wouldn’t be vulnerable to such damage in the first place. In contrast, the plastics used in the I/O cluster and the front panel are very good indeed.