The Vicious Cycle of Gaming DRM

by Brett Thomas on April 23, 2010 in Editorials & Interviews

From music to movies to software and games, we can’t seem to use a computer today without encountering some form of DRM. That’s not even the worst of it, as the situation continues to decline over time. Taking a look at things from a gaming perspective, what can we do as gamers to help put DRM back on the right path?

After years of railing against companies for the benefit of the consumer, from fights over Internet Radio to movies on our iPods, I’ve finally found an argument where I am as angry with the crackers as with the protectors. I’ve fought the good fight. I’ve argued for less DRM and more importantly less intrusive DRM. But for once, and at the worst possible time, I have to say that the crackers and pirates are no longer the friends of gamers worldwide. But before utterly blasting me as monopolistic and corporate, please let me conclude my case.

Through each of these moves in the copyright protection of video games and software, nobody has bothered to thank the companies for getting rid of the old days of manual pages and code lookups. “Please enter the first word on the third paragraph of the seventh page:” has been gone for years, replaced by simply inserting a CD, and then not even needing to do that.

Along the way, we’ve been given patch delivery, digital downloads, and (the only visible benefit to Ubi’s latest plan) even cloud saves – so that you can pick up where you left off anywhere the game is installed. All of this, we ignore. We take it for granted and we spit on the companies for daring to try to protect their software in the first place, as if they have no right to expect payment for their efforts. We, as a group, perpetually take the position of Sony at the PS3 launch, in reverse. They should be lucky we play their games, even if we don’t pay for them. 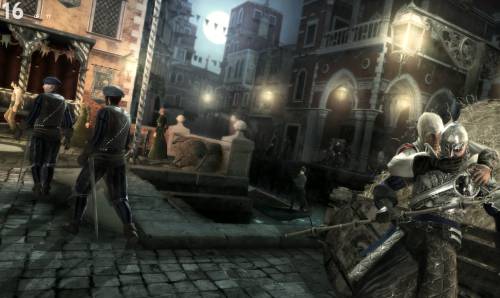 My biggest issue is in our gall that we are entitled to play it even if we didn’t buy it. For years, we argued en masse that demos weren’t provided when we used to pirate CDs, saying people “try before they buy” since the shareware days had waned. But companies have quietly listened and technology improved – and with so many people on broadband Internet now, you can download demos for most anything and play a good half hour or so. It’s certainly enough to know whether you like the game or not.

Simply because you didn’t like it enough to buy it doesn’t give the right to download the rest of it for free and play it anyway, arguing that they “didn’t lose a sale” because you weren’t ever going to own it. I know, because I gave that argument when John Carmack was whimpering like a little schoolgirl about Doom 3 piracy. It wasn’t worth my $50, and I couldn’t demo it… but when I downloaded it, I played through it just to find out what everyone was talking about. I didn’t stop when I realized I didn’t care about the game enough to buy it, because I already had it.

At some point, we as gamers need to acknowledge that we have given up the high road. It has become a war between companies and pirates, and the only loser is the real consumer. Ubisoft’s DRM is, in all respects, a complete and utter step backward – I don’t argue that. It IS draconian. It IS insufferable and indefensible. But we need to claim a bit of culpability here, people. We have been given more and more convenience since 1985, when other media industries have given us less and less latitude. And each time they make it easier for us to use, we steal it, sell it, trade it and treat it all like we are somehow entitled because we are gamers.

The truth is, if you want a system that works, you can’t just “not buy” Assassin’s Creed 2 or Settlers 7 or any of the other arguably great games afflicted with this abomination. You have to actually not play them. You need to write emails to their customer support, and their marketing. You need to buy games that don’t do this. Piracy is not a statement, and we have ourselves to blame for that. When companies did release things for the convenience of the consumer, we stole it anyway and often laughed that they made it so easy. You need to actually be active and make a choice to make a statement.

I’m quite sure this will fall on many deaf ears, and many who bothered to really get to the end of this missive will blast me for laying the blame of this bastard-child on gamers at large instead of the company that released it. I know this – personally, I agree with Jerry “Tycho” Holkins’ “Argument with a Strawman” analogy. Dropping an A-bomb like Ubisoft did raises this non-discussion to a fevered screaming match on the gamers’ side, not that it was much less prior to this.

If you just go download the game, play it and say they didn’t lose a sale because you’d never buy their DRM, you just reinforce the message that we’re not ever going to play by the rules. More gauntlets will be thrown, each heavier than the last. They won’t win, but neither will we as gamers. Over time, the game companies may even really band together and get to the point of being like the RIAA – suing everything that moves. If there’s anything that a media company can learn from them, it’s that even if you can’t win a war against your consumers, you can still get paid quite handsomely in the process of losing.