Combat mechanics have been changed a fair amount. No longer must you rest your hand over Z-X-C for combat styles, flicking between swords while juggling the right Sign to cast.

Fast style is now the left mouse button and Strong style is the right mouse button. Group style was rescinded and is now an ability you can unlock in the character development screen. You don’t have to time attacks to continue a combo anymore either, but you still need to juggle those Steel and Silver swords.

The camera is the free movement type. Under general running around and dialogue, it remains fairly close to Geralt; when things turn ugly, then it pulls out, providing a wider field of view. Progressing through the game also allows you to take control of other characters throughout the story, which can be a little disorienting at first.

However, it’s not a simple button mash now, as you still need to think on your feet in a fight. Block/Parry is a new action, allowing you to block attacks to begin with, but later on can be upgraded to parry, arrow deflection, and eventually counter attack. This consumes vigor (equivalent of mana) per hit, and in a group attack situation, can completely deplete your vigor in less than a second for little gain. A dodge roll can be performed with either the space bar or double-tap of WASD. 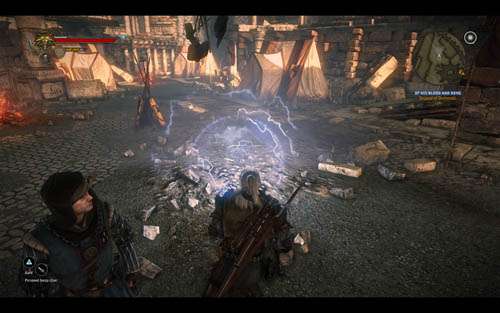 Nearly all Signs (magic) are given to you straight away in their basic form, you don’t have to pick them up from stones or some such to learn them like the original. Signs are triggered with the Q key and you can either select them via keys 4-9 or by the new quick-menu system by holding CTRL. 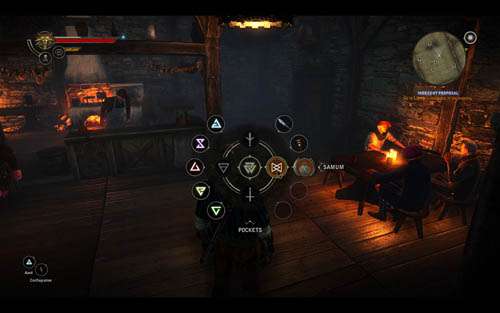 The quick-menu allows you to meditate, select Signs or use pocketed items like bombs, traps and daggers. It also slows the game down, rather than pausing, so you have to be careful.

Combat strategy has been taken up a notch for sure – even on the easiest setting, The Witcher 2 can be a ruthlessly unforgiving game; not quite Demon’s Souls, but certainly enough to cause aggravation. This is especially true during the first chapter, where Nekkers and Drowners can charge towards you in packs of 6 or more with no decent weapons or armor to defend yourself. By the second chapter, this becomes less of an issue as the decent kit starts to come in. As the difficulty is increased, the game turns into a real challenge as mobs can take you out with just a couple blows, increasing your reliance on traps, bombs, Signs and alchemy to survive. 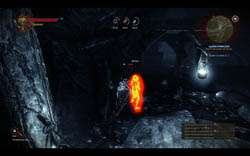 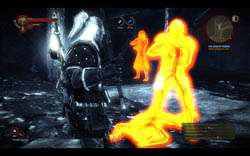 However, there are a number of instances that many will call fowl over; such as how 2 guards with halberds can pummel you repeatedly with no way of dodging, blocking or casting since they repeatedly knock you down. The reverse is true too; have a slow opponent and you can spam the Fast or Strong style with the odd Aard Sign and they’ll never be able to make a comeback. But when you are surrounded and get caught in the middle of a 4 on 1 because you forgot to lay traps, might as well reload a save and try again.

There are arguably still kinks to work out, such as weapon collision detection issues, namely with the group attack ability, as enemies standing directly in front of you are unaffected, but those who are a couple feet away and to the side, are hit. 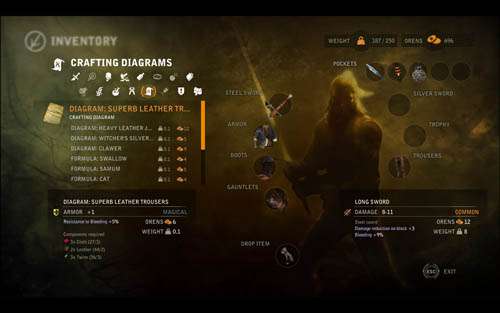 The inventory system has ditched the item slots and moved to a weight-based system. For the most part, this is can be a frustration as item weights can be inconsistent – books weigh nothing yet item diagrams and formulas do. Plants weigh nothing but diamond dust does… leather, timber and iron ore all weigh the same… needless to say, you’ll be spending a fair amount of time partaking in inventory management. 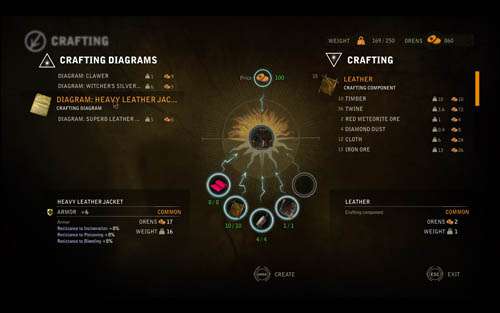 Speaking of diagrams and formulae, welcome to the new crafting system! Alchemy is no longer guesswork but dictated by the available formula you find and purchase. Creating armor, traps, bombs and weapons requires diagrams. While each diagram/formula may list what each requires, it’s after a painfully long pause as you wait for it to scroll into view, usually resulting in frequent trips to crafters to see what each item actually requires at a glance. It is not the most elegant of solutions, but does lend to a certain amount of customization, especially with regard to item enhancements. 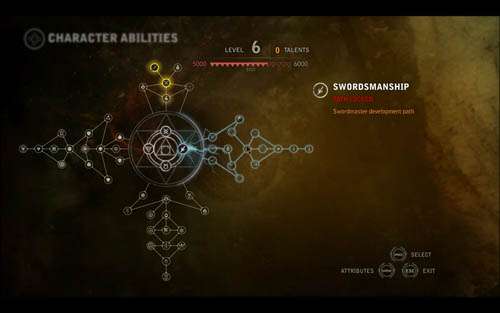 Also under the rework hammer comes the skill/ability tree. Each level gains you a point to spend with three major ‘paths’ to follow. What is not immediately obvious, unless you are fond of reading, is that you need to spend at least 6 points in the training path (top), in order to unlock the Magic, Sword and Alchemy paths. You are free to pick whichever skills you like and can mix and match them as you go.

Progressing far enough into one tree can unlock adrenaline abilities which are powerful skills or a Sign that can be unleashed, providing an edge in a fight. Certain abilities can also be upgraded further with Mutagens, items that can be found from monsters or created as a result of Alchemy.