Many of the mini-games are still present, such as poker dice and fist fights. The fist fights are now – for better or worse – Quick Time Event based (QTE). Now you must mash one or two of the WASD keys in quick succession when prompted in order to strike a blow or counter-attack.

Dice poker remains mostly the same but with a very different set of graphics – admittedly, this is not to my style, the new numbers are roman numeral based with primitive shapes denoting value – much more confusing than the original and familiar dots. Another unfortunate problem is that of the AI’s favor to winning. While in the original game, before the Enhanced Edition came out, winning at dice was extraordinary simple; roll and win, the AI was dumb, you rarely lost, a quick way to gain cash. 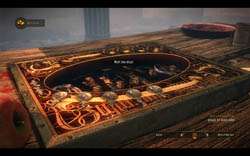 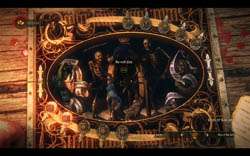 When the Enhanced Edition of the original came out, they switched the dice engine and pretty much reversed the win streaks. That seems to have carried over to Witcher 2, with the odds heavily stacked against you (very hard to compete against an AI that rolls a full-house, high flush and then 4 of a kind on the first go for 3 sets in a row…).

There is also a new physics model in play where you actually throw the dice into the box rather than simply dropping them. This also means you have to be careful, since if you throw too hard, one or more of the dice could leave the confines of the board and no longer counted for the rest of the match. This also means that rather unexpected flying dice can happen – flying out of the box on a gentle throw. 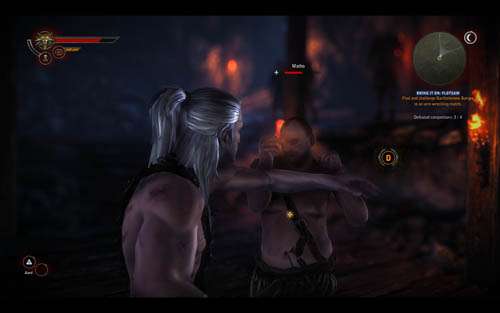 Drinking is now purely a social event rather than a contest – is this the result of political pressure, that of the contests glorifying drinking? Who knows, in any case, in terms of both story immersion and as a pass time, the removal of the drinking competitions does improve social events – you just can’t get drunk on a whim anymore. The head sway and screen blur still remain in all their nauseating glory. 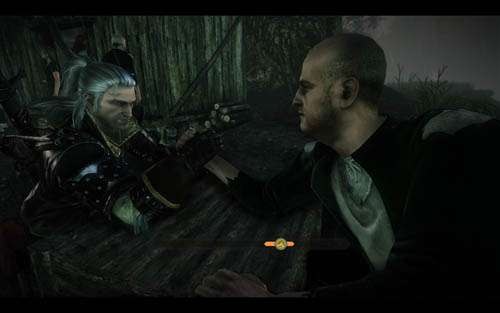 A new mini-game has been introduced too, that of bicep-crunching, testosterone-pumping, death grip forming and super-manly – Arm Wrestling. The objective is simple enough, slam your opponents arm down against the table at a very awkward and uncomfortable angle. The mechanism to do this will be a little disconcerting although visually simple. Keep the icon in the middle of the slider as it moves across the bar. Sounds simple enough but there is a knack to it, which can be picked up quite quickly – just beware of Dwarves and steroid-packing meat-men.