If you are looking for a quality NAS, the N2100 from Thecus is worth your consideration. It can act as a music and photo sharing hub and even an FTP server, among others. Though, the best part might be it’s price.

With more and more people jumping on the digital bandwagon we now have more users downloading music and videos at record paces. Also, as households continue to grow, they often need more than one PC, and thus the need for a unified, safe and secure storage solution has never been greater. With the demand for centralized storage, be it at home or a small business, one convenient and often cheaper solution is a network attached storage (NAS) box to fill those needs.

With a NAS box, multiple users can access files stored in one convenient location. Another great use for a NAS box is critical data backups. Most people these days have digital cameras. Like their film counterparts, these cameras are used to capture special times in our lives that we donâ€™t necessarily want to forget about. With a NAS box, a routine backup can be set that will archive precious data like family photos or an extensive music collection on a weekly basis.

When it comes to backing up critical data, itâ€™s always best to back it up as often as possible, and ideally, in more than one place. At my day job, we backup every bit of mission critical data once a week and take those backups to an off site location where we place them in a fireproof safe. In the event of an emergency, we can simply retrieve the data from the safe and load all of the backed up data. While there are certain scenarios where this will not help much, such as a large scale fire for example, this does offer an incredible amount data security, assuming the servers donâ€™t just catch fire. If that happens, there are far worse things to worry about.

While an off site back up is normal in industries, itâ€™s an unrealistic process for small business or home users. Whether itâ€™s too cost prohibitive or time consuming, there are better ways to back up your data. One such way to get the piece of mind of a data backup is to house that critical data in more than one spot or on separate hard drives. The convenience of one central location and the redundancies of two separate hard drives can be found now in small NAS boxes like the Thecus N2100.

Catering to the security conscious network admin or home user, Thecus produces affordable network storage devices for large business as well as end users like you and me. Today, we are taking a look at their popular N2100 2 disk Y.E.S. box. Allowing the end users to set up storage in RAID 0, RAID 1 or JBOD, the N2100 appears to be an all in one storage device. Throughout our month with the NAS box, we tested its features and worked with the device daily. Read on to find out what we found out.

Thecus ships all of their N2100s in an attractive red box. On the front, we see gads of people enjoying themselves, possibly to show that with the N2100, you can securely store the photos of their enjoyable times. Whatever it means, it catches your attention, beckoning you to read more. One nice thing about the packaging is the handle on the top of the case. While nothing ground breaking or revolutionary, it is a nice extra that helps when lugging the thing around. 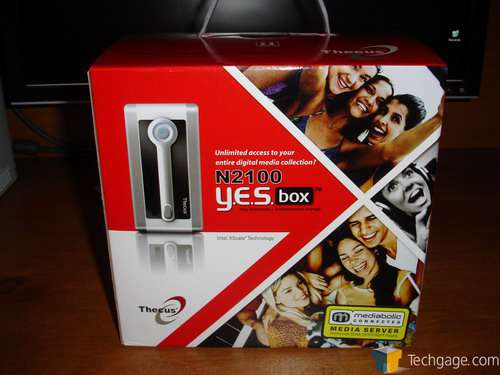 Moving to the side of the box, Thecus as listed not only the uses of the N2100 Y.E.S. box, but also the features of it as well. These include the ability to use the device as a FTP server, an iTunes server, file sharing as well as the options to use RAID 1 or 0 and connectivity information. One thing to notice and itâ€™s something that this editor deeply appreciates seeing more and more of, is the RoHS compliance logo. With everyone doing their part, big or small, the environment will ultimately be a better place for us all. 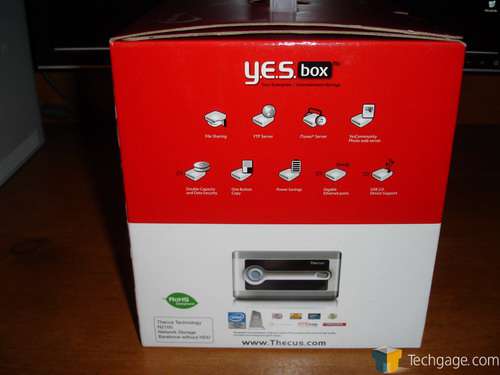 The back of the box talks a bit more about the included software and how the Y.E.S. box has multi-language support. This, fittingly, is mentioned in 6 different languages. 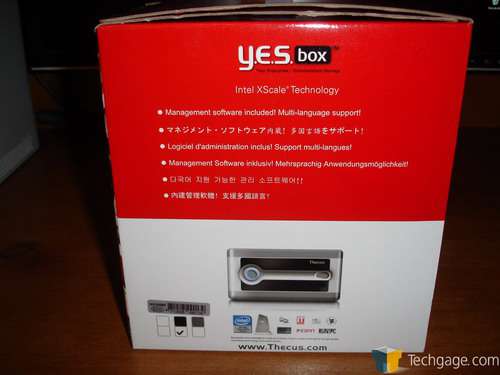 Once opened up, the N2100 comes securely packaged in the middle of a cardboard shell. Also, to protect the unit from scratches in transit, the NAS box comes in a plastic bag as we can see in the next photo. 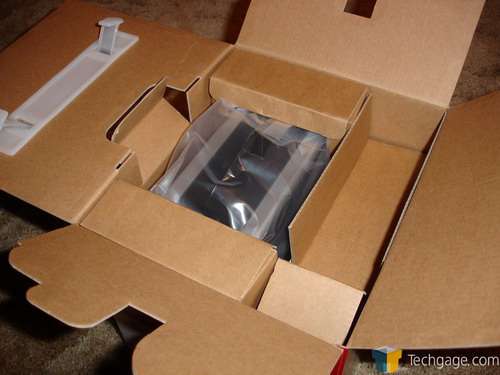 Once out of the package, Thecus has shipped the N2100 with a few accessories to help get you up and going. Included is a small manual to help get you started, a software disk and a warranty card. 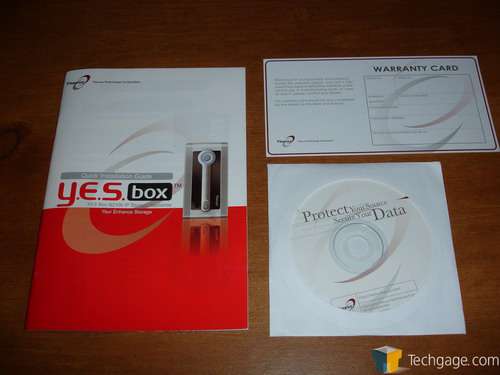 Also provided are an external power supply, an Ethernet cable and a small bag of screws to mount the hard drive(s) in the NAS box itself. While there arenâ€™t any special bells and whistles to mention, Thecus has been very careful to provide you with everything you will need to set up the Y.E.S. box at home, or at work. 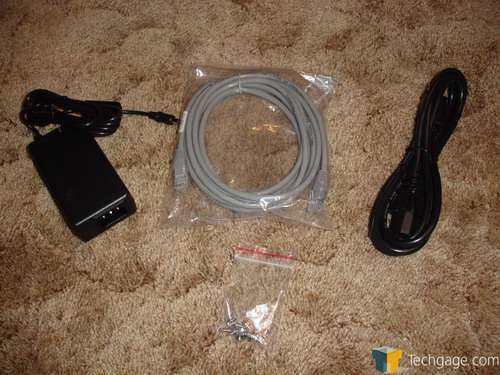 Moving to the NAS box itself, the Y.E.S. box Thecus provided us is an attractively designed piece. With a black exterior with silver and chrome trim, the N2100 is a piece that will look good just about anywhere in a home or office. Just beware though; the reflective black will attract fingerprints like crazy. 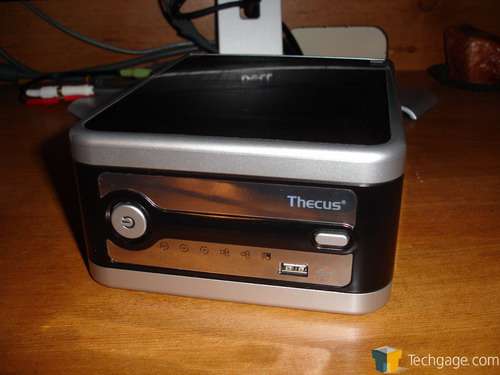 On the front, from left to right, we have the large power button, six different LED indicators, a lone USB port and one smaller button above the USB port. This button provides a quick and easy way to back up the contents of a USB flash drive with a simple push of a button. 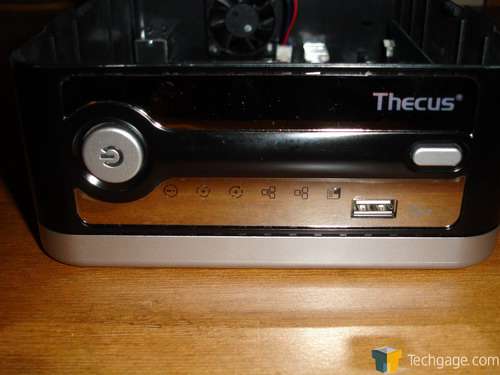 Moving to the back, there is an assortment of ports, as well as an exhaust area for the cooling fan located on the inside of the device. Starting from left to right, there is a power jack, a pair of USB 2.0, an exhaust for the fan and a pair of 10/100/1000 networks ports. Just above the network jacks is a small opening for a wireless antenna should you choose to install one down the road. The wireless option is something that is currently not offered by Thecus in the N2100 but as we will see shortly, the motherboard does have room for a card. More on this later. 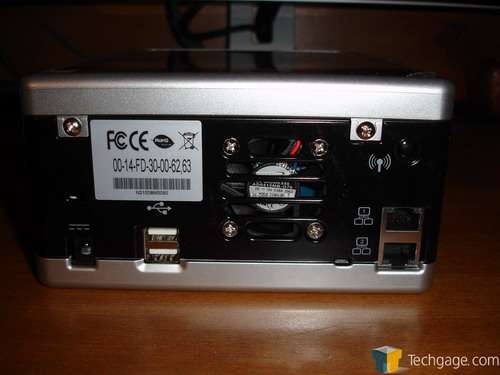