by Brandon Mietzner on September 16, 2014 in Cooling

Thermaltake is taking us from Extreme to Ultimate with its new Water 3.0 closed-loop CPU water cooling solution. This brings us up to three 120mm fans, a doubling of the cooling surface, and a more powerful pump. This makes it the biggest and strongest Water offering yet. Will this effort bring prefab water cooling to new heights?

The installation instructions are illustrated simply enough but they can be a little challenging to understand, especially when there are only pictures and no written instructions. To make things easier, I performed a dry-run before any screws got tightened, this ensured that installation was easy, effortless, and was not too time-consuming. If you have any questions about how to perform a certain step, Thermaltake has a video on how to install the Ultimate for an Intel CPU.

During the course of the installation, I never encountered anything that felt cheap or brittle. The only problem that I had was the length of the coolant lines, which forced me to install the Ultimate in one direction. While this wasn’t a major problem, I did run into an issue of the radiator touching the rear case fan, thus preventing optimum installation. Thankfully, I was able to circumvent this minor inconvenience by moving the radiator forward a little, albeit with fewer screws, with no further issue. 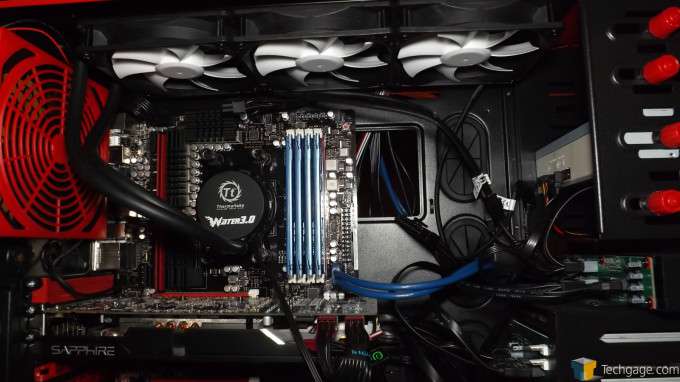 Without further ado, here are the specs of the PC we will be testing:

During the course of these tests, the room was a comfortable 72ºF or 22ºC. All temperature numbers are from the socket temp, not the core. The reason for this is that the manufacturer specifies the physical temps for the CPU’s thermal limits and the motherboard is set up to read that information, not the core temp. Core temp has a tendency to provide numbers that might be unrealistic and inconsistent (core temp was listed as 8ºC); which is why I choose to omit them. All temperature measurements were taken with AIDA64 Engineer.

The AMD Stock CPU Cooler and the Water 3.0 Ultimate were both given 10 minutes to reach their peak idle temps. To push the CPU to its limit I used Cinebench R15. With its separate CPU and GPU test, it gave me the opportunity to only test what I needed. I also performed the test 5 times. This way I was pushing the CPU to its temperature peak to get the most accurate numbers.

Throughout the testing process, the Ultimate never became unreasonably loud. The majority of the time, the case fans seemed to be more audible than the Ultimate’s fans did.

I was able to push my stable overclocking limit to 4.4GHz, with both the AMD CPU Cooler and the Water 3.0 Ultimate. Anything beyond that, even with the Ultimate, the CPU just wouldn’t remain stable at idle. This means the CPU was at its limit, not the Ultimate’s ability to keep it cool.

It is common to see stark differences between air cooled and any water cooling system. What is uncommon is the temperature variance seen between the idle and load numbers with a prefab water cooling kit. These numbers perfectly illustrate why the Ultimate’s increased surface area is so important.

As I mentioned before, there wasn’t a whole lot that I could find at fault with the Water 3.0 Ultimate, which is currently etailing for $139.99. This may seem like a premium price, but it is in fact somewhat reasonable. Just to water cool a CPU with a home-made triple-rad solution, you would be looking at around $200 when you consider all the parts I mentioned earlier, and that is a modest number to boot. 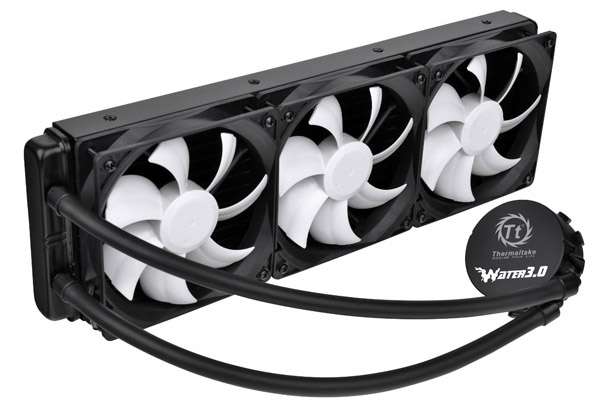 The way I see it, the Water 3.0 Ultimate changes the fundamental nature of how we all should see prefab water cooling kits. With the versatility to support a wide range of CPU sockets and its ability to provide impressively low temperatures with low noise, while overclocked, this is an easy recommendation.

This may be a one trick pony, but it does the trick very well, and it should be considered by custom water cooling proponents, veterans and newcomers alike.