There is little doubt that the Thermaltake Armor is one of those cases that most everyone can appreciate. It’s spacious, looks great and is built well. Matt took a look at the case back in April, and walked away impressed. It was not jaw dropping, but delivered enough to earn itself an 8 out of 10 on our scale.

Building upon the success of both the Armor and Kandalf cases, Thermaltake thought it was a good idea to create a new version of the case with the addition of water cooling. This was far from being a bad idea. The Armor is a big case and really allows water cooling enthusiasts to enjoy the benefits of having a large space to work in. However, there are a few people who love the idea of water cooling, but don’t want to dive into the complete DIY realm of the hobby.

That includes me. Personally, I enjoy water cooling however I am not knowledgable in the regard. I could throw together a water cooling rig just fine, but I am still a complete noob when it comes to understanding which parts are better than others, what metals not to mix with a certain type of coolant… and so on. Both my primary workstation and benchmarking PC run off of Corsairs N500, so that’s evidence to the fact that I am not the type of person to plan out the ultimate solution with a DIY setup. However luckily enough, the N500 proves to be a great all-in-one solution that I’ve come to enjoy quite a bit.

Being the noob that I am, I looked quite forward to receiving the Armor LCS to see just how easy it would prove to be to setup and use. Since this is the first time I’ve ever touched an Armor, I will give my experiences on the case overall as well. 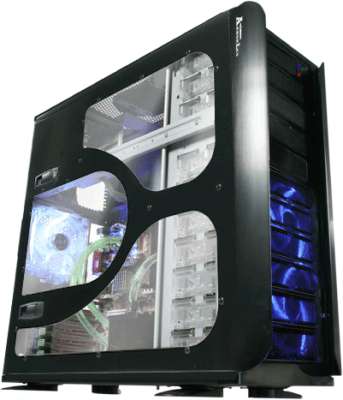 The case arrived in a huge box… I am sure the mailman was pleased to deliver such a beast. I did not include photos of the box itself, because it apparently had quite a rough journey making it across the Continent to me in Canada. Upon opening, the first thing you will see is the case wrapped up in a strong blanket-like material used to prevent scratches. Chances are any scratches that will occur would be when you take the case OUT of the box, not during shipping. Good packaging job overall.. tight and secure.

The case… weighs over 20Kg, so it was fun getting it out of the box easily. The easiest way way to lay the box down on it’s side and pull on the styrofoam pieces to haul it out. After that, you can remove one piece of the foam, stand the case up and remove the other. This cheesecloth like material well wraps around the case, so I had to lift up each end to get it free.

I apologize for the less than ideal images. I am in a small room, and this is a huge case, so you will see my bedroom randomly. That said, here is the case! It’s hard to see from this photo, but compared to the NZXT Apollo in the background, there is no comparison. The Armor could eat both the Apollo and Lexa for dinner. 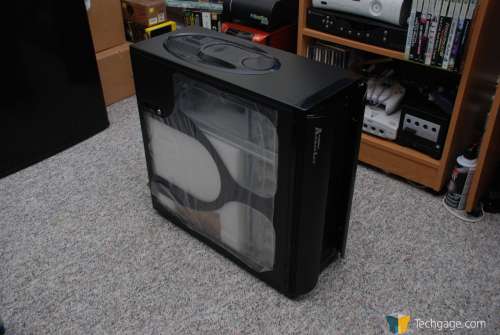 As a whole, the case is very stylish. The front has two small doors on hinges that open up to install a new CD-Rom, media panel or whatever have you. The left door lets you in on a little secret… the name of the case. The hinges on these doors… show the quality that has gone into the case. These are not cheap, and you will never see them come loose, at least hopefully. Very strong looking design. 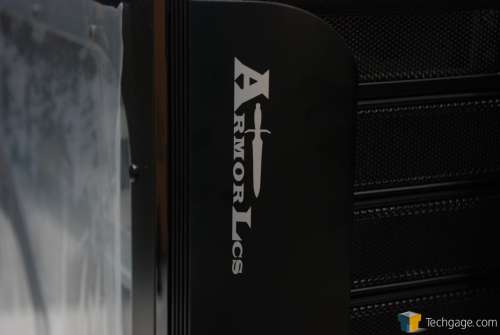 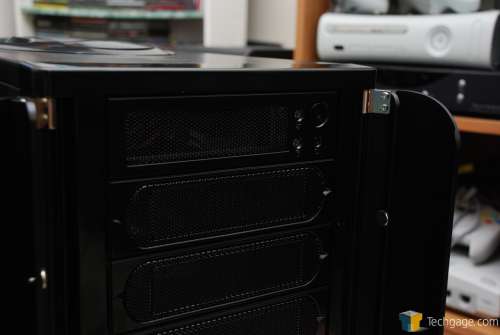 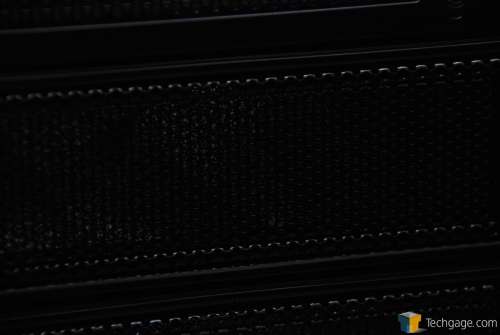 The entire front is full of drive bays, although 2 – 5 are the only ones useable by drives. The bottom six have the radiator directly behind them, so air is sucked through here to keep it cool.