For a long time now, a water-cooled rig has been a status symbol of sorts – the calling card of a true enthusiast on the lunatic fringe of performance computing. A well-designed water cooling setup can have significantly higher thermal capacity than even the best air-coolers, and radiators may be placed remotely – even externally – which lets them take advantage of cooler incoming air.

Water cooling systems are also scalable; system designers can connect multiple CPUs, GPUs, and even the motherboard’s chipset to the coolant loop. Also, some water-cooling systems are designed to operate in complete silence, with massive external heatsinks that operate passively, and acoustically-isolated pumps. One such system is the Zalman Reserator.

Liquid-cooling offers some more fundamental thermal advantages over straight air-cooling, however. Water has a higher specific heat capacity than air, which means that the coolant absorbs more energy per degree of temperature rise than air does. That means there’s a greater temperature differential between the fluid and the heat-producing component, so a bulky heatsink cooler can be replaced with a compact water block, and the greater thermal conductivity of the coolant means that the heat transfer to a liquid coolant is almost 25 times more effective than direct transmission to air.

Still, all of that heat needs to be released to the air eventually, or else the benefits of water cooling evaporate, so water-cooled rigs use large radiators and fans to blow away the heat quietly.

Water cooling also has some serious drawbacks that make it impractical for many applications, reserving it for only the most extreme thermal solutions. First of all, water-based coolant solutions are electrically conductive, so if a tubing connection should fail or a reservoir should happen to leak, extensive damage can be done to the electronic components of the PC. 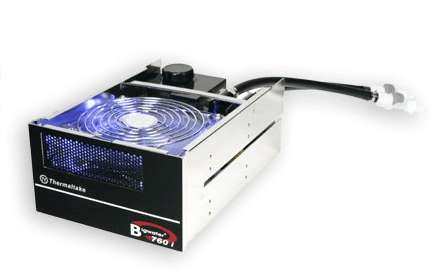 Secondly, setup of a water-cooling system can be extremely complex and involved, and requires proper planning of tubing routes and lengths, radiator capacities, and pump flow rates. Liquid cooling systems also require some maintenance, due to bacteria, mold, and algae growth in the fluid. Lastly, if you’ve elected to go with an external water cooling system, transporting your rig can become cumbersome and inconvenient, and potentially hazardous.

The product I’m looking at in this article hopes to solve some of these drawbacks that make water-cooling less-than-practical in many cases. The Thermaltake BigWater 760i is a self-contained water cooling system with a pump, reservoir, and 120mm-square radiator that occupies the space of two 5.25″ drive bays.

It’s part of Thermaltake’s BigWater series of packaged water-cooling systems that include everything you need to assemble a complete water-cooling loop in your case. The BigWater 760i’s drive bay mounting system is a novel concept – while we’ve seen other self-contained systems with similar specifications, they’ve been mounted externally.

Thermaltake is no stranger to the enthusiast water-cooling market, with an exceedingly broad range of water-cooling products that range from cases with pre-installed water-cooling systems, to a broad range of individual liquid cooling system components, and even enormous external radiator systems. With the BigWater 760i, Thermaltake emphasizes simplicity and modularity. However, can the BigWater 760i offer enough of a performance improvement over enthusiast air-cooling solutions to earn its keep and make it an attractive alternative? We’ll soon find out.