Thermaltake’s BigWater 760i is a fully self-contained water cooling system that fits into the space of two 5.25″ drive bays, with only a pair of tubes running to the CPU water block, greatly simplifying installation. Here’s a look at the BigWater’s features, as well as the installation process. 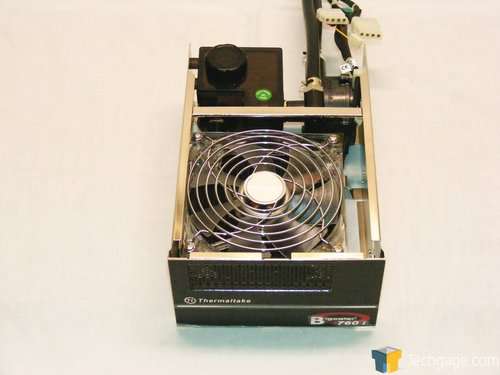 The BigWater 760i’s main unit contains the pump, reservoir, radiator, and fan. The radiator fan is a 120x25mm size, and features blue LED illumination and continuously-adjustable speed control via a small potentiometer that’s bundled together with the power supply connections. The pump is essentially the same as what’s included with Thermaltake’s AquaBay M5 system, except it’s hard-mounted to the chassis and to the reservoir. 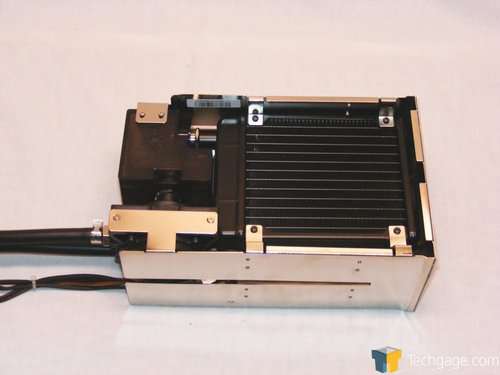 The BigWater’s radiator is an aluminum “motorsports”-style design, featuring louvered fins and dimpled tubing to increase effectiveness without increasing weight. The louvered fins create turbulent airflow, causing more of the moving air to be incident on the surfaces of the radiator instead of passing straight through. Similarly, the dimples in the surfaces of the radiator tubes create turbulent swirling of the fluid flow. 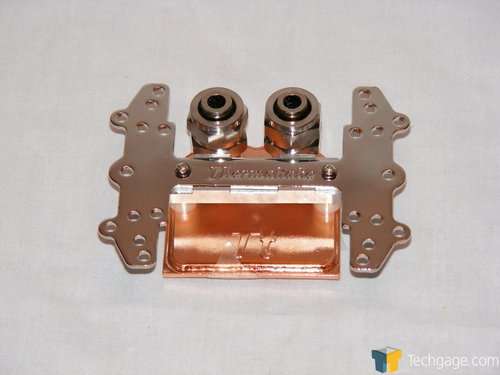 The water block included with the BigWater 760i is 100% copper, and assembled using a brazing process instead of soldering, for improved heat transfer between the bottom and top halves of the water block. The interior of the water block contains “micro channels”, which create turbulence in the fluid flow and increase the overall surface area through which heat exchange takes place. 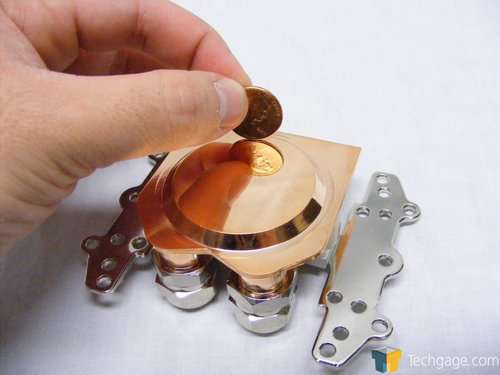 One important area affecting heatsink and water block performance is the quality of the surface finish on the base. Thermal paste is meant to fill microscopic gaps between the base of the thermal solution and the processor die itself, but direct contact is still the most effective means of transferring heat from a warm object to a cool object, and the fewer machining marks or grooves that exist on the base of the heatsink or water block, the better. The BigWater 760i’s water block has an exquisitely-finished base, polished to a mirror shine. Old Abe Lincoln’s head looked positively resplendent in the highly-scientific “penny test”. 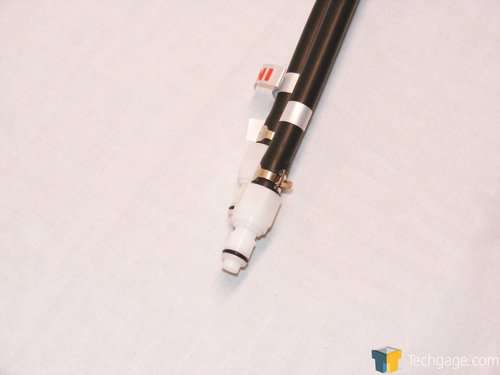 Thermaltake has implemented a quick-disconnect system with the BigWater 760i, which is intended to simplify installation and removal of the system. The “no-spill” fittings allow the system to be quickly disconnected, but be aware that a small amount of fluid may remain in the connector itself. If you’ll be disconnecting this system frequently, have a glass ready to catch the excess fluid that might drip out.