All heatsink testing at Techgage is performed with three considerations in mind: repeatability, accuracy, and comparison. In order to achieve these three aims, it’s important to use a standardized testing platform for all measurements which are to be compared.

In this case, the test platform is based around an AMD Athlon X2 “EE” model, which operates inside a 65-watt thermal envelope, similar to most Intel Core 2 Duo CPUs. What’s most important, however, is that the test platform be consistent in its operation, so that the thermal margins provided by each CPU cooler can be directly compared – since it’s the proportional change that we really care about.

The test system was originally designed to simulate the airflow of a typical enthusiast PC, minus any extraneous heat loads provided by a separate GPU, massive hard drive arrays, et cetera. However, in testing with a separate discrete GPU installed, it was found that significantly higher CPU temperatures under load were attainable with our particular type of stress test, indicating that the IGP was actually limiting the heat generation potential of the CPU.

For this reason, effective immediately, the test system will be revised to contain a reference video card as well. New measurements made using this test platform are not comparable to previous measurements, so new measurements have been made of all CPU coolers used in comparison for this article.

In addition, it seems that as CPU coolers continue to push the cooling envelope, and compact all-in-one water cooling solutions gain popularity, necessitating a greater heat load, the current test system may be pushed into obsolescence in the near future because of its relatively small 65-watt heat load when compared to the nearly 130-watt heat load of modern quad-core CPUs.

For this review, the Thermaltake Mozart TX case was substituted for the Cooler Master iTower 930, due to space issues in accommodating the Thermaltake BigWater 760i’s radiator unit. 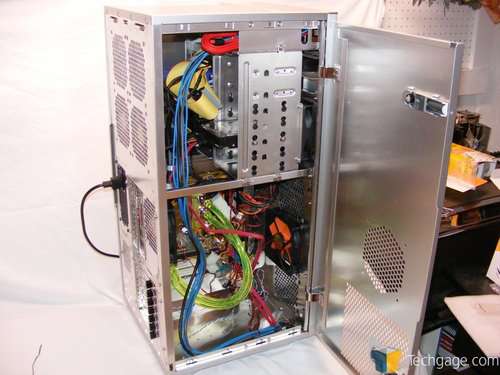 Before installing either the water block or the cooler, a ball bearing-sized drop of Arctic Silver was spread into a thin layer using the sharp edge of a razor blade. During testing, Cool N’ Quiet was disabled, as well as the board’s “Q-Fan” smart fan control. The system was first allowed to reach a stable idle temperature for about 30 minutes before testing was performed. 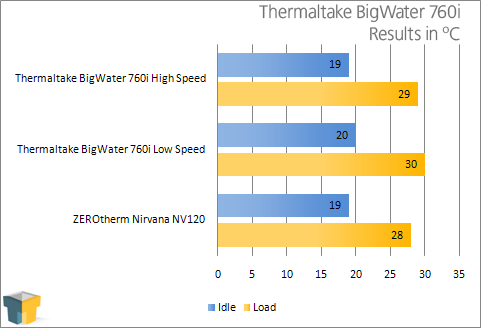 I’m using APACK’s ZEROTherm NV120 “Nirvana” cooler as a reference in this test, because it represents just about the top of the heap in enthusiast air-cooling, outstripping the cooling ability of the Zalman CNPS9700 by a small margin. The Thermaltake BigWater 760i’s simple, integrated design is meant to compete with high-end air-cooling solutions, so this comparison makes sense.

While the Thermaltake BigWater 760i certainly holds its own in the testing, it failed to eke out a lead against the high-end air cooling solution under load. Water cooling systems can handle transient loads well, thanks to their higher thermal mass, so to eliminate this potential for error, the CPU was loaded continuously for about 30 minutes before making temperature readings. 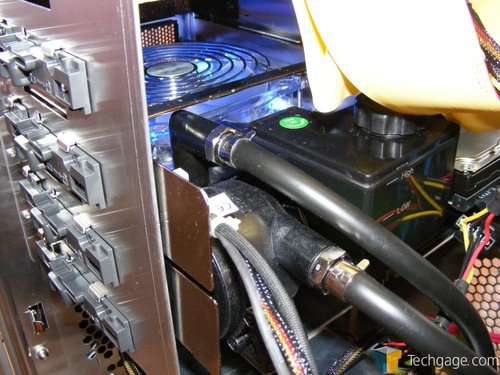 The BigWater 760i has two major noise- and vibration-producing components. The pump itself is a significant source of vibration, though it does not generate much in the way of acoustic noise. If it’s not rigidly mounted, however, it can generate a low hum that resonates throughout the metal case.

The 120mm fan mounted to the radiator is still plainly audible even at its lowest speed, with audible turbulence and motor noise, though at high speed, blade noise dominates the sonic signature. In addition, the radiator unit emanates the sound of flowing coolant which, while soothing, isn’t silence. I can’t recommend this product for a ‘silent’ PC, though it may find a home in a ‘low noise’ system.