Thermaltake’s BigWater 760i is an intriguing product on a number of levels. It offers the simplicity of external water-cooling systems, but in a design that can be internally mounted. I personally know more than one enthusiast with extra 5.25″ drive bays to spare, and Thermaltake’s bay-mounted concept provides a way to make good use of that space, instead of letting it go to waste.

The BigWater 760i is a robust thermal solution in its own right – while it didn’t shatter the record held by the ZEROtherm Nirvana cooler I reviewed in November of 2007, it delivered performance that’s definitely on-par with the best air-cooling solutions out there. 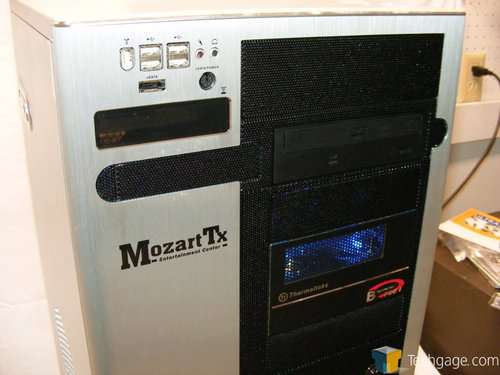 There were a few things I found less than encouraging about the BigWater 760i, besides the fact that it failed to unseat the reigning champion in air-cooling. First of all, the water block and mounting bracket require extensive assembly, when a simple clip-style or push-pin mounting system would have streamlined the installation process immensely.

As it stands, you can’t install the BigWater 760i without removing the motherboard from the case. In addition, the chassis of the radiator unit felt flimsy and cheap, and I would have preferred to see the front of the unit completely enclosed in mesh, instead of just a tiny window through which to view the fan’s illumination. A full-face grille would improve the unit’s performance in worst-case scenarios where the drive bays above and below the radiator unit are occupied.

What really saves the BigWater 760i, in my mind, is its simplicity and overall cool-factor. I mean, c’mon, it’s a water-cooling setup that doesn’t dominate your entire case. And it’s expandable, so you can plumb in additional water blocks for your VGA cards, chipset, hard drives, memory, and anything else that’s being water-cooled these days.

If you want to really take things to an extreme, you could theoretically add additional radiators to the system. Its performance is on par with the best air-cooling out there, but it’s got undeniable appeal simply for the fact that with only an afternoon’s worth of work, you too can join the water-cooling club. I’m awarding the Thermaltake BigWater a Techgage score of 7.