Thermaltake has a large number of chassis lines, but it’s time to welcome another: Chaser. The first model, MK-1, features a bold, gamer-esque design and borrows many cues from the Level 10 GT. It features an HDD dock, a headphone holder, and tons of cooling capacity. At $150, is this a full-tower that should top your list?

It’s full-tower review time again! This time around we have the latest and hopefully greatest from Thermaltake, the Chaser MK-1. This case was previewed at Computex in Taiwan earlier this year and has been staring at me from the review pile for far too long.

The last Thermaltake case that we checked out was the amazing Level 10 GT that had everything anybody could ever want – looks, cooling and loads of room to work in. But, it also came with a hefty price tag. Judging by the specifications alone, the Chaser MK-1 might be the case to buy for those who need most of what the Level 10 GT offers, without having to donate any bodily fluids or organs to afford one.

Constructed from steel with plastic accents, the Chaser MK-1 full-tower case features a black and blue colour scheme inside and out. It stands just shy of 568mm high, is 581.6mm deep and weighs in at a back-straining 27.1 lbs while supporting micro-ATX and ATX motherboards. 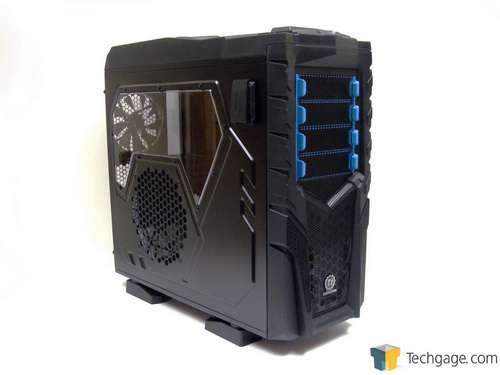 The front of the Chaser MK-1 features a styled plastic and metal mesh panel divided into two sections. Making up the top portion are four 5.25″ drive bay covers outlined by blue accents that double as the external cover releases, and the bottom portion that hides a 200mm “Colorshift” intake fan behind the silver Thermaltake logo. 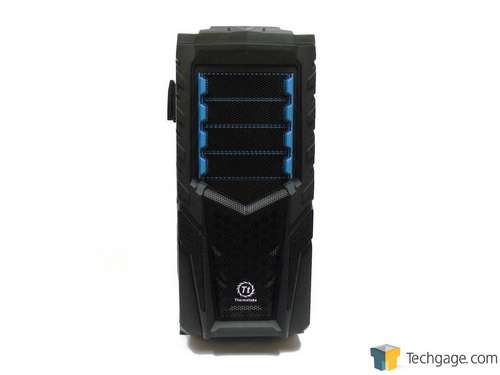 Over on the left side are the large window that takes up most of the top and a vented area below it with a pre-install filter where an optional 200mm fan can be mounted. Towards the front at the top of the panel is a flip-down headset holder for those who like to keep their cups where they can grab them easily.

At the very back about a third of the way up is a loop that matches up with one on the rear panel. These two loops allow for a small lock to be used so that the side panel cannot be removed. Side panels this large will always have a certain degree of flexing so to counter this a design has been stamped into the metal and runs around the perimeter. 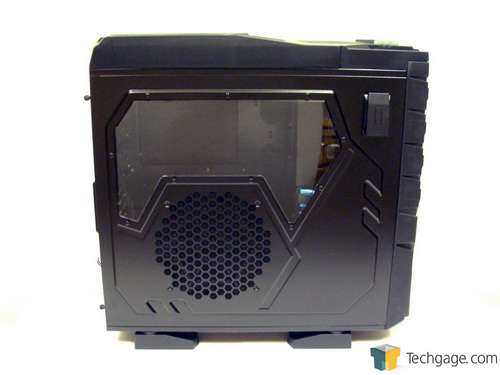 The layout of the back of the Chaser MK-1 starts off with a recessed area at the top that allows the top cover to be removed when pulled up on. Below the recess to the left is the motherboard I/O opening, to the right are three pass-through holes with rubber grommets for external water cooling and a 140mm non-LED exhaust fan below.

Further down are the 8 vented PCI slot covers, a security loop to the right that can be accessed from inside the case and used to keep peripherals secure, a large vented area further down and the power supply opening at the bottom. 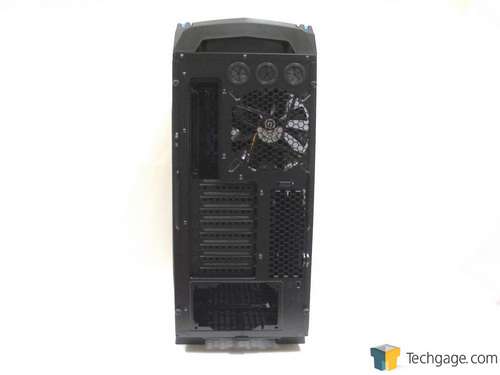 There’s not much to see on the right side panel since it is completely solid, but it has been stamped with the same pattern as the other side, only flipped upside down to give it a little bit of eye appeal while providing strength. Both panels are secured using two black thumbscrews. 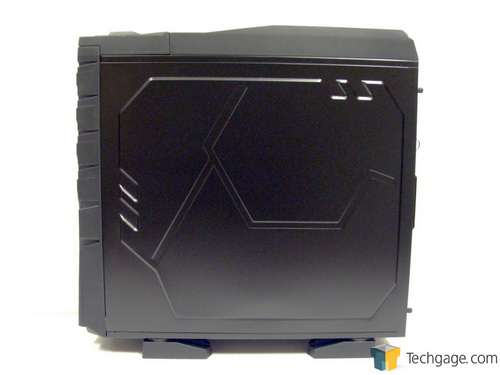 The top panel has a lot going on, so starting on the left side and working forward finds the 3.5mm headset and microphone jacks, the reset button, high and low fan speed buttons and the LED colour control button for the Colorshift fans. Over on the right at the top are two USB 3.0 ports, an eSATA port and two USB 2.0 ports.

Smack dab in the center of all of this is the diamond-shaped power surrounded by a blue accent that fades in and out when the system is on. Finally, behind the power button is the spring-loaded door of a hot swap hard drive bay based on Thermaltake’s own BlacX that can accept either 2.5″ or 3.5″ drives. 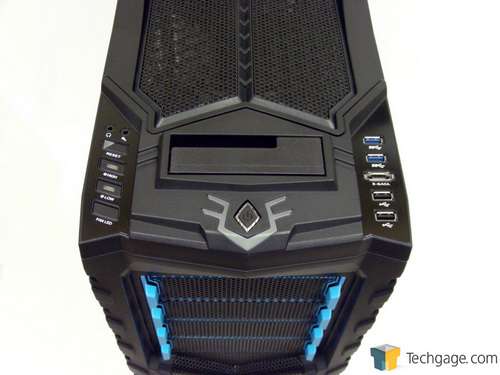 From there back the rest of the top panel is covered in the same mesh found on the front panel, which hides a second 200mm Colorshift exhaust fan with room for another 200mm, 140mm or 120mm fan. If water cooling is your thing, the included fan can be swapped out in favour of a 240mm radiator. 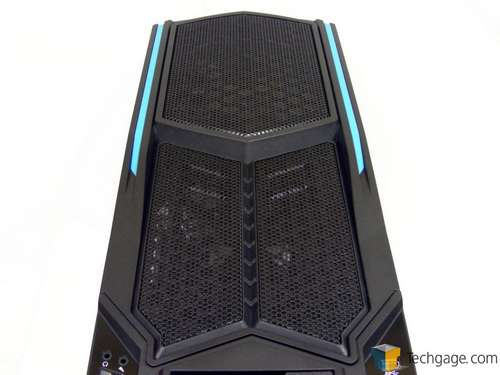 The underside of the Chaser MK-1 shows off four case feet that can rotate 360 degrees for extra stability. The rest of the bottom is taken up by a removable dust filter that covers the area where an optional 120mm or 140mm fan can be installed, along with the power supply vents. 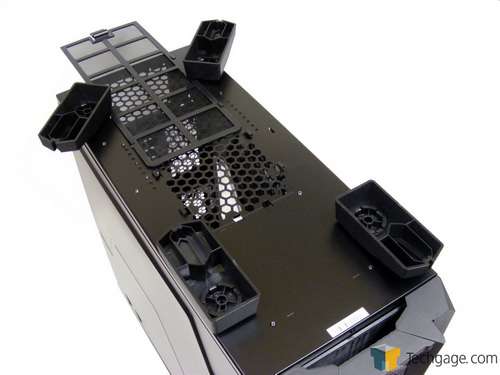 Regardless of whether the exterior appeals to you or not, the Chaser MK-1 is shaping up to be a great case. Let’s get those pesky panels off and see what’s under the hood.