When Thermaltake released its Level 10 chassis, it was unique in both its design and price-point – the latter of which kept it out of the hands of the regular enthusiast. Enter the Level 10 GT, a ~$270 variant that retains much of the aesthetic appeal of the original, but is easier to build with and has other cool features added to boot.

Oh, the glamorous life of a hardware reviewer. The parties, the girls, the booze… well, I haven’t actually been to a sponsored party yet and the only girls I’ve seen are in pictures of the booth babes after the trade shows, but I have the booze part covered! That’s right, we live in the lap of luxury alright, and as such have access to some of the craziest gear out there.

It doesn’t get any crazier than Thermaltake’s 2009 launch of the Level 10 full-tower case. Designed in conjunction with German automotive heavyweight, BMW, it was a radical departure from typical cases by featuring a unique compartmentalized layout where nearly each component was separated from the rest.

But what made it stand out the most for many of us in the tech world was the price; $800! Luckily, Thermaltake has released the Level 10 GT, a case that shares the name and overall outward appearance of the original but gives us more features that we, as computer enthusiasts want and need, at a more affordable price. 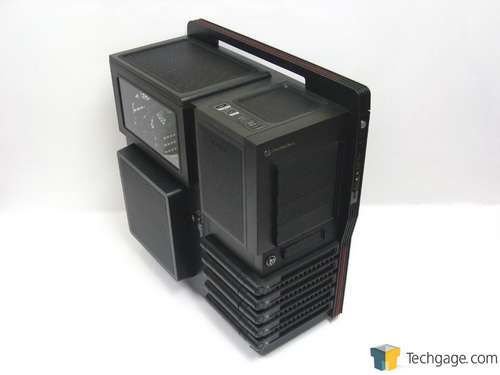 To start off, the Level 10 GT comes in a black cloth bag with the brand, model and slogans for each silkscreened onto it. This keeps the case in pristine condition, protecting it from dust and scratches during shipping. 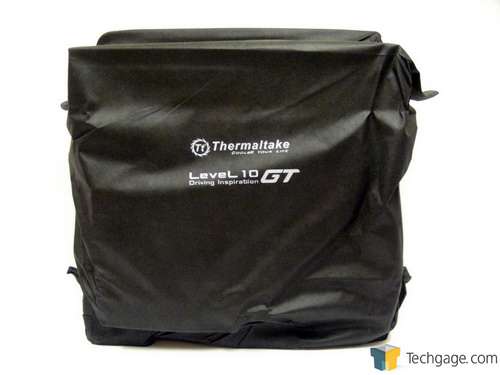 The front of this now steel and plastic behemoth, like all areas, gives us a lot of ground to cover. So, I chose to take an overall shot of each side and then individual shots of different features to ensure that nothing is missed. 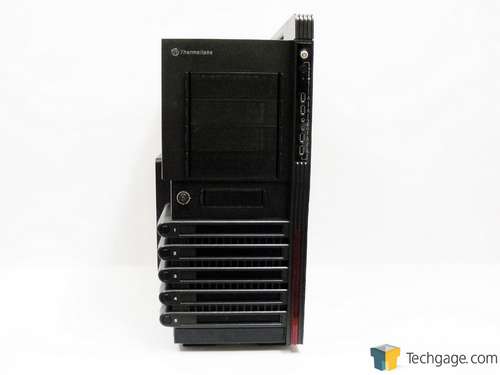 Starting at the top are four 5.25″ and one 3.5″ mesh covered drive bays, each hiding an air filter on the inside to help keep dust out. All of the covers can be removed by squeezing on the clips on either side. Just to the left of the 3.5″ bay is a lock that will keep hard drives safe and secure. Set into an accent on the right that eventually turns into a handle at the top is the first I/O area. From top to bottom are the power and reset buttons, the hard drive activity LED, the first set of USB 2.0 ports, 3.5mm microphone and headphone ports and a second set of USB 2.0 ports at the bottom. 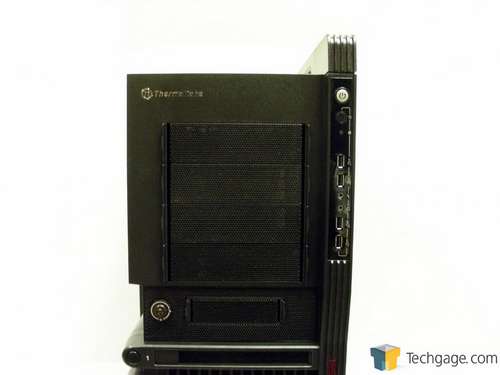 Moving on down finds the five 3.5″ or 2.5″ hot swap drive bays, each with its own release button next to the drive number. Once unlocked, the button can be pushed and the drives pulled free from the left. Since all of the bays are hot swap, switching out drives can be done on-the-fly if the motherboard being used supports AHCI. To keep each drive cool is a 200mm ColorShift LED intake fan. What’s Colorshift? Well, keep reading. 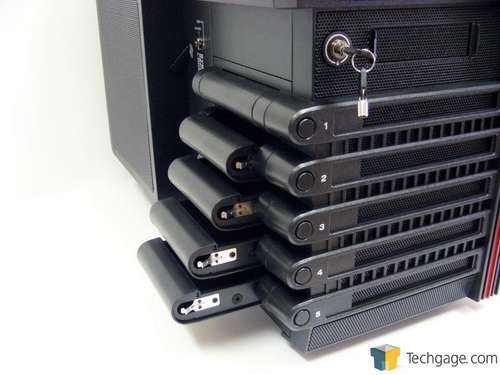 The left side looks somewhat similar to the original Level 10 but it does not feature a true compartmentalized layout. 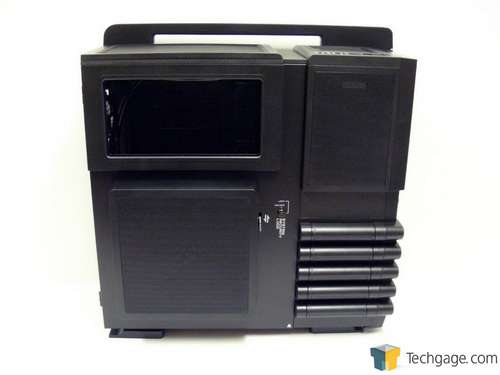 At the lower front are the hard drive bays mentioned earlier so I’ll leave them be. Above them is a mesh area with a small rubber insert. This insert is labeled with the word “hanger” and can be removed so the included headset holder can be installed. 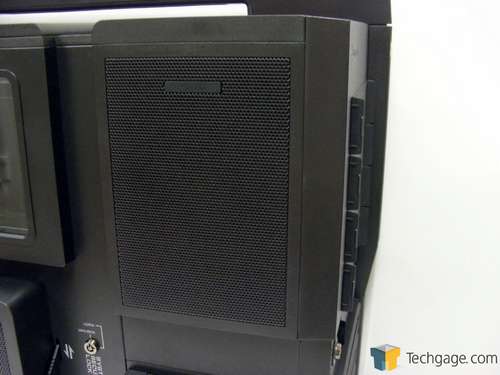 The rest of the side is covered by a panel that allows access to the remaining components. At the top left is a window that allows a peek into the system to see what makes it tick and is trimmed by a piece of plastic that gives a nice, clean look instead of simply a metal edge with screws or pins.

Below the window on the right is another lock to keep wandering hands away from expensive gear and is step one to opening this panel. To the right of the lock is a small lever that controls a vent under another mesh area on the far left. This vent controls how much air is pulled into the system by another 200mm ColorShift fan. There is also a removable air filter that slides out the back for easy cleaning. 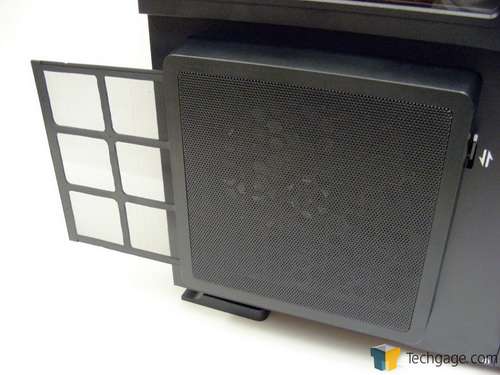 Hanging on a metal loop around the back at the top left is a set of keys to unlock both areas, but the loop is meant to keep peripherals secure. A thumbscrew is removed from the inside of the loop placed over the cables meaning nobody can walk off with your keyboard or mouse without causing some serious damage.

To the right are three holes with rubber grommets for some water cooling, but wait… three holes? More on that in a bit. Heading south shows the motherboard I/O opening and a 140mm non-LED exhaust fan. Below that are 8 vented PCI slot covers that have the thumbscrews on the outside, a PCI slot cover, uh, cover and an extra vented area to the right. Rounding out the back is the opening for the power supply at the bottom and a second security loop to the right. 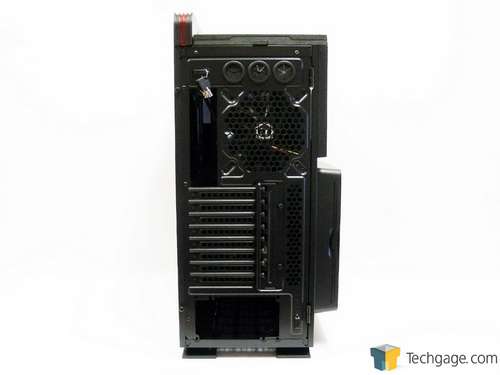 The right side has a little bit of detail in the form of the brand, model names and slogans just as the cloth bag had. Almost all of the panel is raised giving users more room to route cables and has an additional raised T-shape for a bit of extra styling. Held on by two thumb screws, this panel slides back and can be removed to access the locking mechanisms for the 5.25″ drive bays and the back of the motherboard tray. 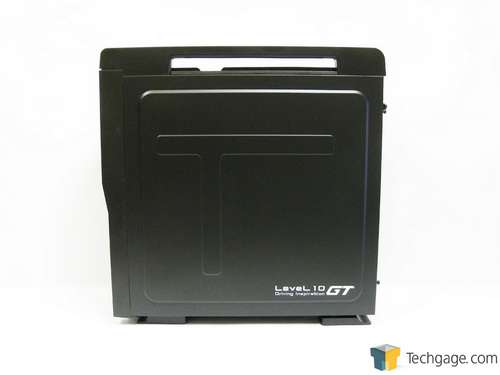 Up on the top of the case at the front left are more connections. This time around there is one for eSATA and two for USB 3.0. The two USB 3.0 ports are given connectivity by the included USB cables that connect directly to free ports on the rear I/O panel and is the reason why there is a third hole above the rear exhaust fan. There are also two buttons to increase or decrease the speed of all fans in the system and another to change the colour of the LEDs, which is why they were given the name ColorShift. The rest of the top front area is taken up by yet another mesh area directly above the 5.25″ bays. 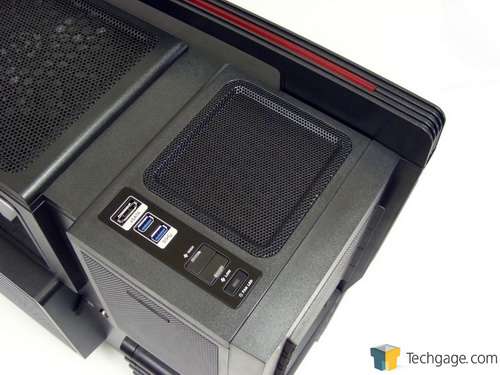 The final vented opening at the rear hides a third 200mm ColorShift LED fan. The cover on this fan can be lifted up and away by pushing in on a tab at the very back. If needed, this fan can be removed and replaced by a 240mm radiator for some water cooling fun. 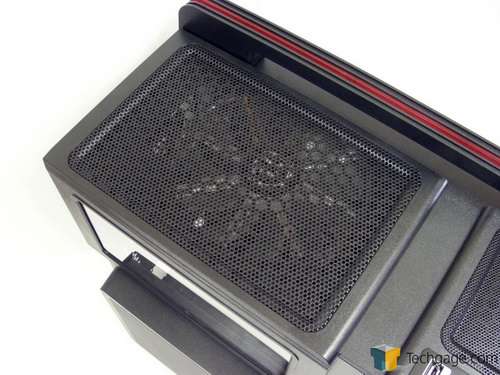 A quick look at the Level 10 GT’s belly shows off four server-style case feet that swing outward for extra stabilization and have a small rubber pad to help keep slipping and vibration under control. Running down the center is the removable air filter for an optional 120mm bottom mounted fan and the bottom mounted power supply. On the left side towards the front foot is the second step for opening the left side panel; the release button that allows the panel to swing open when pressed. 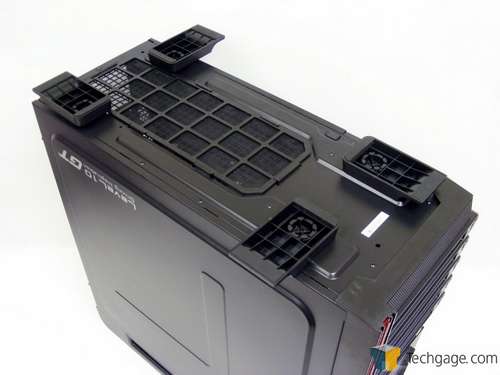 Phew! I’m exhausted already! There are a ton of features on the outside of the case and the inside is no different so it’s time to pop off some panels and have a look.