We’ve looked at several Thermaltake cases in the past and overall they’re pretty nice. They offer a wide variety of cases varying from SFF to huge towers with more drive bays than any sane person can conceive of using. Today we’re looking at one that falls into the latter category. The Mozart TX. Let’s list the features as Thermaltake tells it.

Now, Thermaltake calls this a Cube Tower and it’s key emphasise is on the tower part. This case is twice as tall as it wide and high, actually a bit over twice as tall if you want to get technical. In inches it’s just in at 28" tall X 13" wide X 14" deep. That’s a fairly tall and wide footprint although the depth is very shallow. I’ll discuss what this means to you when we look inside, but if you’re using this case as a floor standing unit it means that the case takes up just a bit over one square foot of real estate. 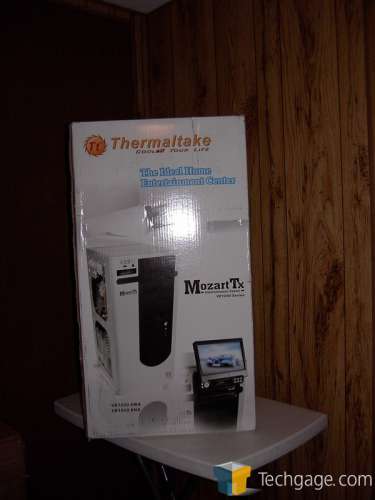 The box is huge! It stands nearly a full three feet tall. It looks like the box took a good hit in transit so we’ll take a look at the case and see if it took any damage. 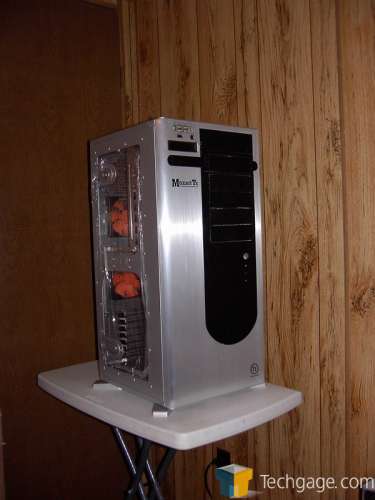 After pulling the Mozart TX out of the box and giving it a good once over I found that there were no dings, dents or broken windows so I gave a huge sigh of relief and got started looking the beast over. I say beast because this thing is a freaking monster! At half as wide as most of your conventional cases (or more than half) and a full 28" tall it’s a hard case to miss in a crowd.

The face is made from a curved aluminum panel that’s around 4mm thick and each end (top and bottom) is covered with an aluminum cap. Near the top you find four USB ports, front audio ports, a lone Firewire port (when will motherboards incorporate more than one front Firewire port?) and an e-SATA port and power for the e-SATA port. The downside about the e-SATA port is that the power requires a legacy plug and Thermaltake neglects to include one. Booo! 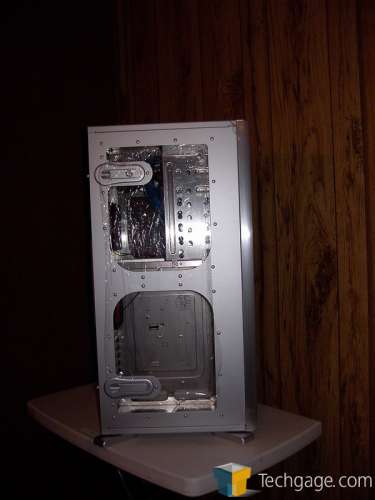 The side panels are held in place with thumbscrews and latches. The left side is the same traditional location where we find the motherboard mount. The HDD’s also live on the left side of the case while the opticals live on the right side. 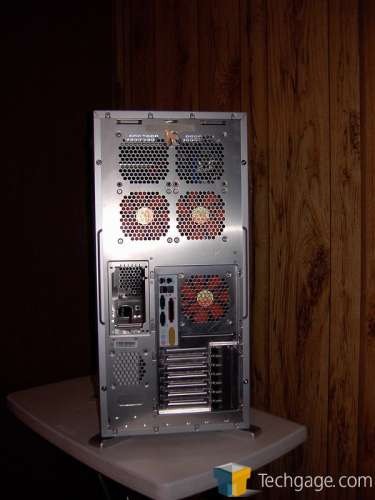 The rear of the case is pretty interesting. There’s enough room back there for 2-240mm rads and at the bottom there are eight knockouts for plumbing in any external water cooling that you can think of… as long as the tubing is 5/8" O.D. that is. 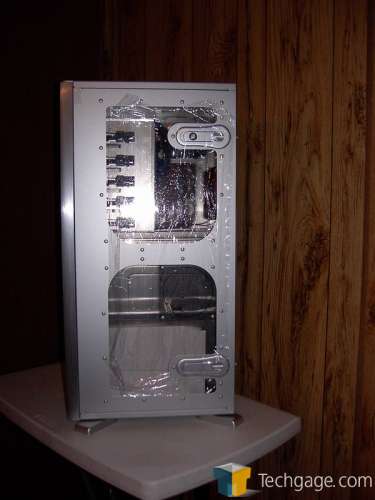 Moving around to the right side we see that there’s nearly enough room for another motherboard, and in fact there is. ITX is the form factor that will fit there due to the fact that the power supply lives on this side of the case and there’s a support that that runs from the front of the case to the rear and over to the mobo tray. This support holds up the power supply and adds structural support to the case. 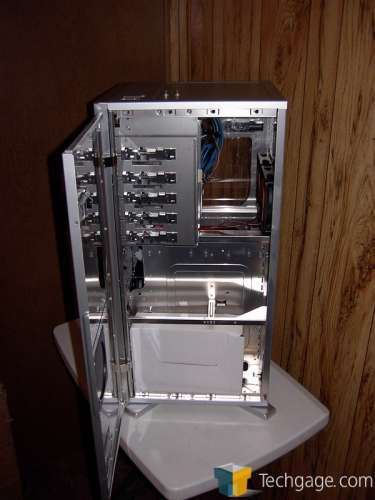 Here’s what I’m talking about. The box with the accessories is also on that side of the case. 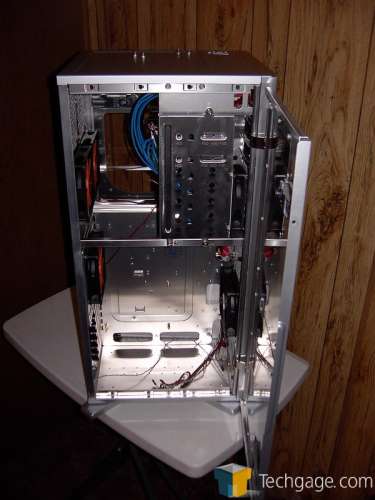 Moving around to the left side we see the HDD cage with the front port cables stuffed into it. We can also see that there’s room for three 120mm fans below the HDD cage which also has a 120mm fan in it. Next to the fan mount between the lower fan and the HDD cage fan there is another fan mount, which if a fan was loaded there would blow air across the motherboard tray on both sides. There is no other fan for blowing intake air through the right side of the case.

Actually, aside from the power supply there are no fans on the off side of the case below the divider. There is a mount for an 80mm fan below the PSU mount but if you’re after silence it’s a marginal solution. A silent 80mm fan is basically useless for providing adequate air flow and an 80mm fan that does provide adequate air flow is about as much fun to endure as a dentist’s drill. Basically a no win situation, although, if you don’t have anything on that side of the case you don’t really need any air flow and even an ITX board will be more than adequately cooled by the 120mm intake fan that blows on both sides of the case so I guess it’s not a huge issue but it still sort of bothers me.