If you want to use this case for a three terabyte server then slapping six 500 gig hard drives in the drive cage is the answer. The lower five bays feature rubber grommets to isolate the hard drives from the case to avoid any unwanted vibrations from the drives and thwart noise. Great idea in theory but in practice it makes very little difference. The front of the case features a large mesh insert that allows any drive motor noise to waft it’s way prosaically to your awaiting ears. I never realized just how loud the motors are on my trusty Western Digital 1600JB’s… all I can say is dayumm. 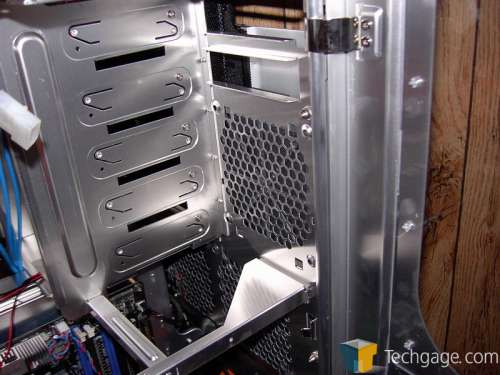 Looking at the space vacated by the HDD cage we see that the mesh drive covers are held in place with screws. Now, I have read a few reviews of this case and one of the complaints I remember was that it seems odd that a case that features tool-less 5.25" bays should have the covers held in place with screws but I’m all for it. Having inadvertently shoved a cover into the 5.25" bays on more than one occasion with my now retired (and sold) Lian Li I can testify as to how much of a buzzkill it is to have to yank a drive out of the case simply because I’ve shoved the cover into the drive bay. 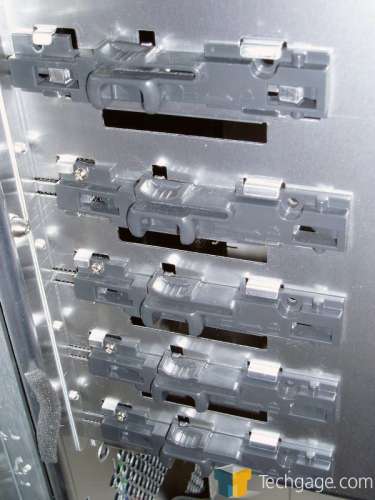 On the flip side of the 5.25" bays we find the locks for the screw-less drive holders. You squeeze the inverted U shape and the relived section together to release the lock and slide it forward to lock the drive in place or back to release it. They work very well and I never had an issue with the drives feeling loose or sloppy in the bays. 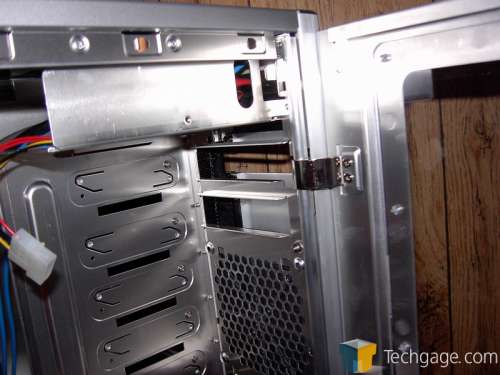 Above the floppy bay and below where the cables are routed from is where the VFD Media Center mounts. It mounts directly to the case front rather than in a bay so the opening for it is simply for the VFD. In my humble opinion I think that for the price of this case (a tad below $300 U.S.) the VFD should be included rather than trying to wring every penny out of the buyer of the case. A simple VFD can’t run more than $30 to produce and it would certainly be a selling point for the case. Oddly it looks as though this case had another incarnation that had two external 3.5" bays, why they chose to not employ them in the Mozart TX is beyond me aside from the fact that the venerable floppy is at last dying out. 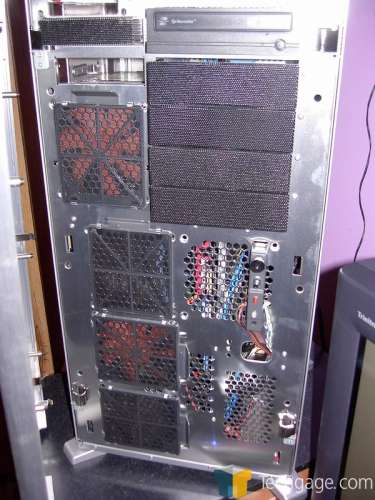 An interesting thing about the Mozart TX is that there are fan filters over all the intake fans. They’re made from a plastic micro mesh and snap into place after sliding them in the small L shaped brackets punched into the front of the case. In a way they’re nice in that they help to keep the dust under control but in another way they’re a hindrance in that you have to remove the case front to get at them and the front mounted ports are on the case front.

If you’ve got the cables tightly routed inside the case removing the front becomes an adventure in futility as you cut everything loose, pull the case front and then have to redo everything. Another downside is that they’re very restrictive. I opted to remove them and saw a significant increase in air flow from the fans. 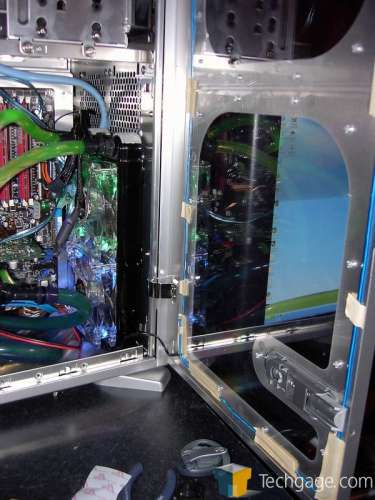 Remember when I said that they say that you can mount a pair of dual 120mm rads in the rear of the case? Well surprise, you can mount one in the front of the case as well. It even looks as though it can accommodate a triple 120mm rad up there as well, in a word, awesome.

And now, as the final look at the monster I’ve got a few nice night shots showing how the business end of the case looks when it’s all up and running. 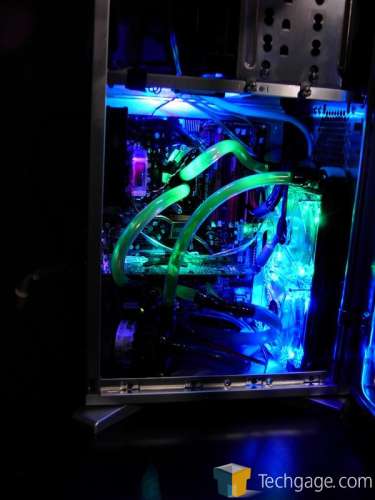 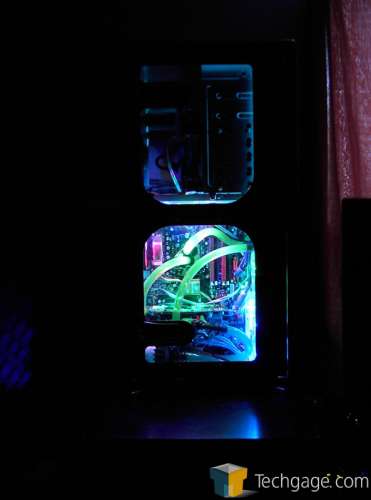 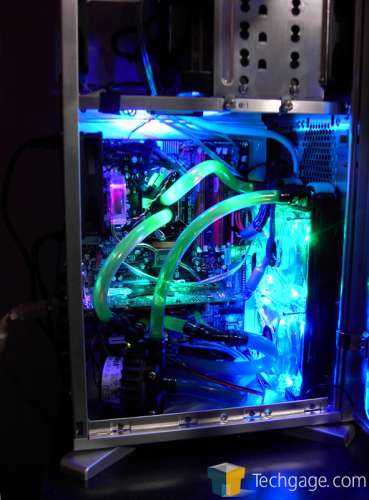 And there you have it, a very well rounded case that has tons of room and can hold basically anything you care to throw at it. Yes, it’s large but for what it is it’s not a hindrance, instead it’s a plus. You can build it into anything that your heart desires, a full on gaming rig (lan parties aren’t much of an option though) or a home file server with a ton of storage space or you can mix the two and using the ITX space provided use the ITX board as a game server for a home lan gaming server that pulls double duty as your main gaming rig.

You can also use the ITX board as an HTPC and have the ATX side do server duties for your SOHO network. Imagine the Mozart tucked away in your living room running a water cooled server with three dual 120mm rads with super quiet fans on them keeping the server nice and cool while the ITX board serves up your music, videos and other media through your home theater. The beauty is that ITX boards don’t require a lot of cooling, in fact the VIA Epia boards can run passive heatsinks on them so that’s a noise source you need not worry about and with a water cooled server running inside the chassis the ITX board wouldn’t need more than a drive big enough to hold the OS and a few apps as the media can be served straight from the server.

The server could even pull double duty as a gaming rig so that you can play games on your HDTV when you’re bored of watching movies. I think that’s pretty much what Thermaltake had in mind when they conceived of the Mozart TX, not the last suggested use but that it’s a case with possibilities that are only limited by your imagination.

Overall I’m awarding the Mozart TX a 9/10 and our Editor’s Choice award. Yes, it’s got a couple of niggling issues but nothing that prevent it from being an astounding case with tons of possibilities to be anything that your heart desires and that your mind can conceive of.