In summary, the TMG coolers appear to perform decently for their price, but more importantly, they deliver fairly well on their claims of lower operating noise. While the most obsessive silent-PC enthusiast may not be satisfied, most users will enjoy peace and quiet along with improved cooling. The claim of 16dBa operating noise levels is almost certainly false in the case of both the A2 CPU cooler and the AT2 GPU cooler, unless some method of reducing their fan speed is used. At full speed, forget it. Still, both coolers I tested from the TMG series were quiet enough that itâ€™s not hard to imagine them being used in a system where low noise is a design goal. 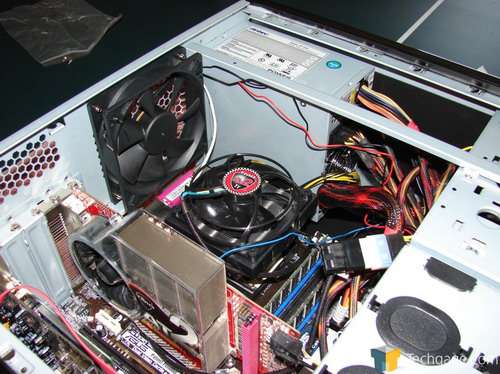 The TMG series represents Thermaltakeâ€™s latest effort to produce a product that will be accepted by those seeking to reduce the noise from their computers. Other products that Thermaltake has branded â€˜silentâ€™ in the past have not lived up to their branding (save, perhaps, for the Big Typhoon). There has alwatThe Thermal Maximum Grade series really seems to be different, however, delivering genuinely quiet noise levels when used with speed control, like that found on most newer motherboards. All the products in the TMG series use the same 92mm axial fan and centrifugal blower design (except for the waterblocks), so the noise assessments in this review most likely hold true for the other products in the TMG series, though thermal performance will almost certainly be different for coolers having a different heatsink design.

Should you choose the Thermaltake TMG series? If youâ€™re obsessive about silence, Iâ€™d suggest you look somewhere else, but if a less-than-absolute degree of silence is acceptable for your next rig build, these thermal solutions are some of Thermaltakeâ€™s best to date when it comes to quiet, while providing significantly better thermal performance than the stock cooling solutions.