The 140mm fan is branded by Thermaltake and has a part number of TT-1425B but looking further on the label reveals that it’s manufactured by Yate Loon. If you’re into quiet computing at all you’ve heard of Yate Loon and if not, they’re a very popular manufacturer of quiet fans with good flow.

I’d also like to point out that the secondary side of the PSU uses Samxon caps rated for 105*C. Again, if your PSU is reaching those temps, you’ve got bigger problems with the rest of your system since you’ve got case temps upwards of 65*C going on to push the PSU that far. 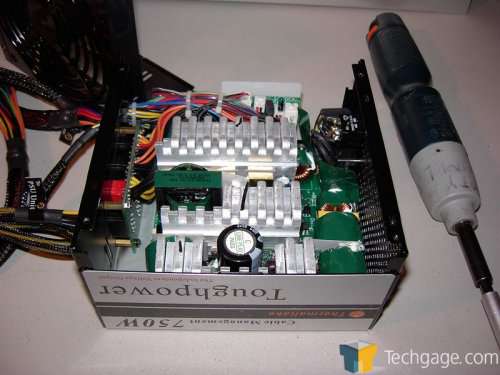 One parting cheesecake shot before I move on to other things. 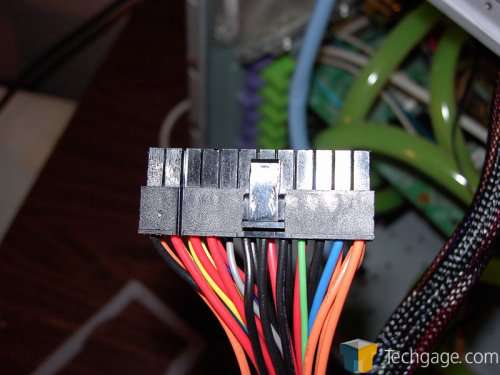 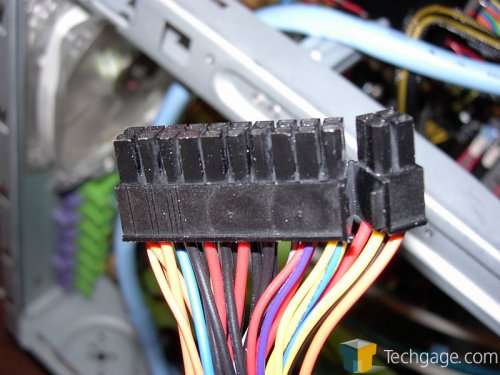 One thing I found odd was the 20+4 connector. It’s not your normal breakaway style, instead it’s hinged. This makes for some interesting fun plugging the 20 pin section in if you’ve got and clutter around the ATX socket on the motherboard. 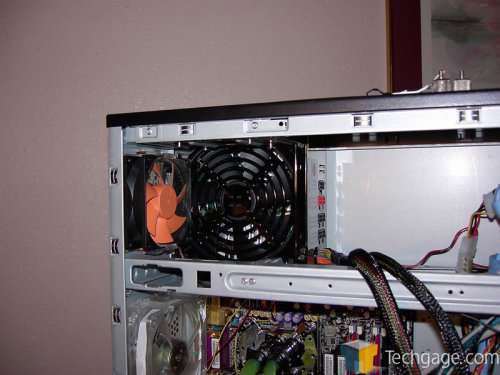 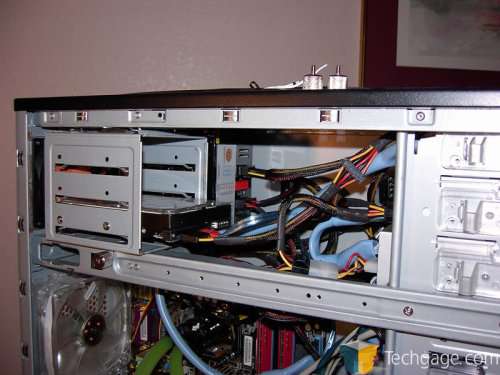 Finally, here’s the PSU mounted in my test bed. Back when I reviewed the Armor I voiced my concerns about the orientation of the PSU in this particular case. As you can see here, the fan is facing the drive gondola and is less that 1/4" away from it. This isn’t great for airflow and is my one major beef with this case setup. Another issue is that the way this case is configured doesn’t allow for the silicone isolator to be mounted on the PSU. The PSU support and the metal shroud above the PSU are so close to the power supply that the isolator grabs them and gets deformed to the point that it just won’t work.

On to the numbers but first the tested system:

This thing is a monster. I’ve done my best and thrown everything I can at it to no avail. The rails have virtually no sag under load. I’ve run [email protected] with games while doing defragging of both my drives and it just giggled.

There weren’t any issues seen by the PSU having no load on the 12V2 rail, I was a bit worried that it might act strangely but no, it was as stable as my shrink’s shrink. Yes, this PSU is overkill for a system like mine but it has so much growth potential that it’s unreal. Say for instance that you buy a few SCSI drives at a garage sale and toss them in your rig, no worries. Later you move up to a dual core on an EPS board, no problem.

Adding a second CPU to that board? Again, no problem.Toss in a high powered SLI setup to compliment that new quad core upgrade? Heh, still good. The upgrade path with this power supply is simply fantastic. If you’d just bought a marginal power supply to begin with then you’d be buying another before going much further in the hypothetical upgrade path. Since this PSU costs about double what you’d spend on two smaller quality PSU’s, the cost is easily justified.

The Thermaltake Toughpower 750W Cable Management is a very well designed and executed power supply. It has very good growth potential while being capable of running an older system while you work on your upgrade path. The 20+4 connector is a bit strange to work with and a fully detachable version would be a welcome change. I’m not a huge fan of punched grills but I’m wondering if they went that route since 140mm fans are the exception rather than the rule and a punched grill is easier than looking for a solid vendor of oddly sized grills.

If you’re planning on doing an upgrade and are anything like me when it comes to the more is better point of view you might look to this for power. That said I’m awarding the Thermaltake Toughpower 750 a 9/10 and our editor’s choice award. This is one PSU that you can’t go wrong with regardless of the price or manufacturer.