Titan likes to be unique, and it’s very apparent in their product line-up. We are going to take a look at their Robela case, that’s far from being ordinary. Packed inside is a full fledged water cooling set-up, but also includes many of the features you look for in a regular case.

The motherboard installation was also a little tricky. Pre-installed are a couple metal motherboard mounts, which I promptly removed. I have not seen them before, and don’t know which type of motherboard they are supposed to be for, but I replaced them with the standard gold-colored ones. The previous ones were difficult to remove, and I needed pliers to remove some of them. I had no issues other than removing those mounts, and the motherboard situated itself fine. 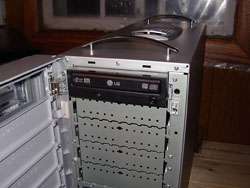 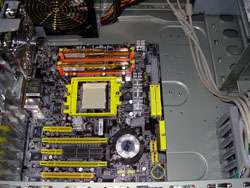 After cleaning up my CPU to prepare for the Nano Blue coat, I examined the water block for dirt and scratches. The block looked good, although it could have been better. It didn’t have a perfectly clear mirror image like it could have, but overall it should do the job. Depending on how your CPU bracket is laid out, you may have to install the block differently than is shown in the book. Instead of having the tubes facing upwards, they are spreading out to the left of the CPU, because I had to install the block sideways. This will not affect performance, because it still covers the CPU well, but it’s odd. 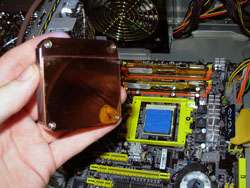 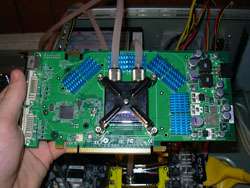 You may notice that I do not have any GPU block installation pictures. This is because a) I forgot to take some, and b) it’s very hard to take pictures when both hands are working off the same card. Sadly, nobody else was around to take pictures. Either way though, this was a challenge, but could not have been made any easier, really. Removal of the previous heatsink/fan was easy, and installation of Titan’s heatsinks was easy. The most difficult part of this task was securing the block to the card with the provided screws. Once everything was in place though, I was happy. 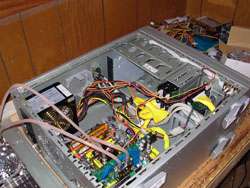 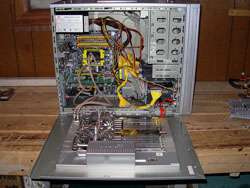 One thing I must say, is that I do not quite agree with the heatsinks. Titan makes no note of what they are made of, but I will assume copper, even though they are blue. There seems to be no conductive properties to the back of the heatsinks though, but is just sticky instead. Sadly, they are not even that sticky, because two of them fell off after a few days of use.

After the blocks were installed, the graphics card was put into the slot and secured. I then made the final connections to the other peripherals, and we were good to roll.