One of the best things that could ever happen to a gamer is seeing a favorite game get remade, and fortunately, that seems to be the trend of the moment. There’s much reason to rejoice for Tony Hawk’s Pro Skater fans as Robomodo has just released a series reboot, aiming to give fans back the THPS they remember so fondly.

For reasons that could warrant an article on its own, I’m not much of a console gamer anymore. But if there’s one series that can make me dust off my Xbox 360 or PlayStation 3, it’s Tony Hawk’s Pro Skater. Like many fans, I got into the series with the original game, released in 1999, and have been hooked ever since. I’ve religiously picked up each game on its day-of-release, and for the earlier titles, own multiple copies for different consoles.

For die-hard fans, the yearly release cycle that the Tony Hawk series adhered to was fantastic, but things admittedly became a bit stale as time went on, made worse thanks to the release of skate. which many found to be a refreshing change for the genre. But for me, it wasn’t realism I was after. I loved pulling off ridiculous combos, grinding the entire way across the level, finding all of the hidden secrets – and I’m not alone. Even so, Neversoft had to do something, and do something fast to retain everyone’s interest in the series.

After the release of the ninth game, Proving Ground, I wrote Neversoft an open letter to recommend spending more time on the next title. What I didn’t expect to happen was the series leaving Neversoft’s grasp, falling into the hands of other developers. The result? Some of the worst Tony Hawk titles ever released; Ride and Shred.

It seemed clear to everyone except the new THPS developer, Robomodo, that what fans wanted was classic THPS. What better way to give fans exactly that than to remake the original games? Enter Tony Hawk’s Pro Skater HD, currently available for the Xbox 360 and soon to be available for the PlayStation 3 and PC. 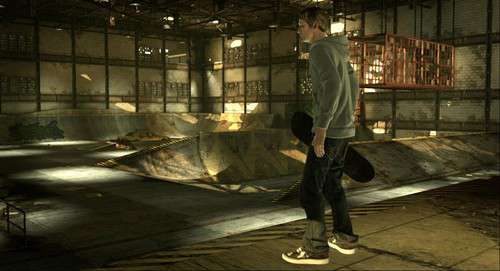 THPS HD contains elements of the original two games, with nothing taken from the later games. That means that the manual is your most advanced skill, with the revert to be added later with DLC. It also means that some quirks still exist, such as being unable to completely stop your character.

Robomodo touts the control of the original titles to be a highlight of the game, but even as a dedicated fan I would have welcomed some fine-tuning. Just because it’s classic doesn’t mean it’s best. It’d be like Ferrari releasing a 2013 F12 Berlinetta with the internals from a 1985 GTB. Alright, that’s exaggerated, but the point remains.

Of the 20 or so levels that were spread across the original two games, only seven made the cut here, which is unfortunate to say the least. Though the game sells for only $15, we’re missing out on some seriously fun levels. Painful omissions for me include Downtown from the original, and Philly in the sequel. Instead, we get Mall and Downhill Jam, neither of which would top many fan lists. Plus, both of those have been redone time and time again in previous releases, as bonus levels. Marseille is also a questionable addition. Though it’s an excellent level, its original purpose was for competition, so the result here seems a bit sloppy and uninspired.

Fortunately, fan-favorites School II, Warehouse and Venice Beach have made it in – the latter of which is particularly special as it’s where we were first introduced to that loveable Ollie the Magic Bum. 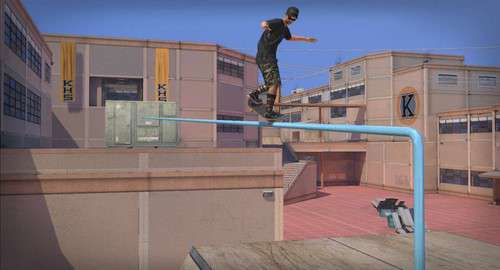 The career mode in THPS HD consists of classic goals, ten in total per level. About half of the goals are carried over from the original games, while the others are brand-new. Goals carried over from the originals remain unchanged, with items or gaps remaining in their same location. None of these goals are particularly challenging, although attaining high scores can be (especially in a level like Mall or Downhill Jam where perfect half-pipes don’t exist).

Once you complete the career mode 100% on any character, a Projectives (professional objectives) mode will be unlocked. This adds new goals to each level which are considerably more difficult than those in the regular career mode, and can properly exercise any THPS veteren’s skill.

Along with those modes comes Big Head and Hawkman. Big Head mode sees your skater’s head constantly expanding, with the only way to return it to normalcy is to score big points. Hawkman laces different-colored orbs around the room, each of which can only be acquired if you perform the correct type of trick while passing through it. Green orbs require you to manual through, for example, while red orbs require a grab trick. Both of these modes include three tiers of difficulty, High, Pro and Sick. 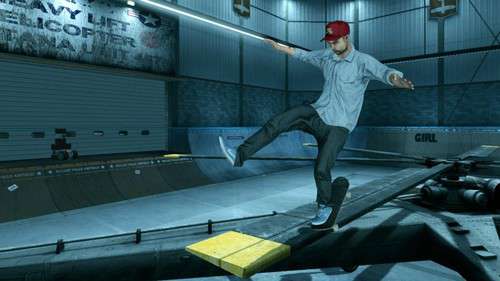 A couple of the skaters from the old games return in THPS HD, with additions including Chris Cole, Lyn-Z Pastrana, Nyjah Huston and Riley Hawk. A mainstay of the series has also made a return: unlockable characters. HD includes four; Officer Dick, Roberta the robot, 1999 Tony Hawk and Ollie the Magic Bum.

As simple as it may seem, one of the best features of THPS has always been the soundtrack. There really hasn’t ever been a title in the series where I found the selection lackluster, and I’ve discovered a lot of artists thanks to them. Bad Religion became my favorite band thanks to the song “You” in the second game, and I own all of Goldfinger’s albums thanks to the inclusion of “Superman” in the original. Neversoft just had a knack for choosing a seriously awesome soundtrack, and fortunately, some of the most popular from the original titles have made a return here.

In addition to both Bad Religion’s and Goldfinger’s tracks being found here, other returnees include Anthrax feat. Chuck D, Powerman 5000, Consumed, Lagwagon and Millencolin. To help fill up the soundtrack further, new tracks have been added, with a couple that are particularly addictive; Pigeon John’s The Bomb and Lateef the Truthspeaker’s We the People. Overall, a rather stellar collection of songs – but after hearing them dozens of times, you’ll likely mute the music and put your own on.