What’s better than racing? Why, racing and blowing up your opponents, of course! Remedy has just released a remake of its 1995 top-down racer Death Rally, and it’s fun. The game has fast-paced racing, a ton of eye candy, gameplay that allows you to hop off as quick as you hopped on, good variety and a modest $10 price tag.

In 1995, Finland-based Remedy Entertainment released its first game, a top-down vehicular combat game called Death Rally. The game was well-received, and allowed the company to move forward to create one of my personal favorite game series, Max Payne, and then went on to make Alan Wake. Remedy’s portfolio is small, but it has a good track record.

Last year, Remedy remade Death Rally for mobile platforms, upgrading the graphics, audio, gameplay and overall appeal for today’s market. Critique on this release was a mixed-bag. Some mechanics changed from the original, and Remedy implemented in-app purchases to help speed up the gameplay – something that doesn’t sit well with most gamers. Despite all that, the time must’ve been right to bring the game over to the PC, as it was made available on select digital services last week.

Unlike the mobile version, Death Rally on the PC doesn’t have in-game purchases. Rather, everything has to be earned by completing races and looting car and weapon parts throughout each. This in itself already makes this version superior to the mobile versions, because you’re never being nudged to buy something. 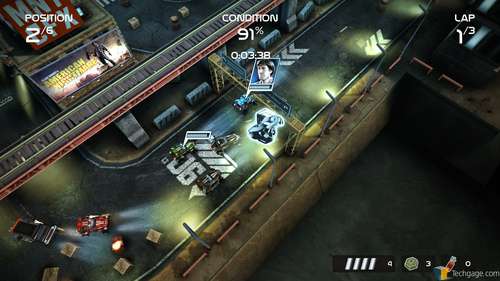 Being that this game is a mobile port, its graphics aren’t on par with what we’d expect from a current-gen PC game. However, what we do have here is good. There’s a ton of eye candy, and the textures have been upgraded from the mobile variant. It’s a visual treat, especially if you like these sorts of games.

The original had no story to speak of, but this remake does – albeit a minor one. It’s best just to ignore it, but realize your ultimate goal is to progress enough so that you can take on the Adversary – someone who drives a better car than you can possibly own, and races almost without fault. You don’t get any special reward for beating him (his car would have been nice), but it doesn’t really matter.

What this game is all about is playing races over and over to unlock new cars, weapons and early on, tracks. Races last an average of one minute, so things are kept flowing at a rapid pace. You’ll be unlocking things left and right early on, grinding only later on when you are trying to level up your weapons to their highest values. In my time with Death Rally so far, I’ve played through about 250 races and I’m still interested in playing more. 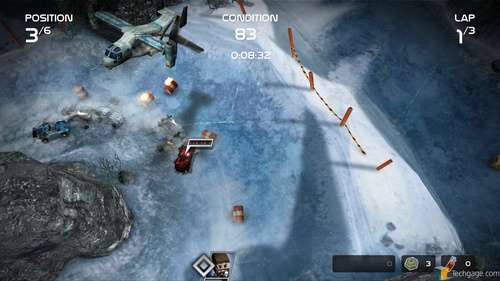 At the start, you’re given just a single car and weapon. As you race, you’ll find parts randomly strewn throughout the tracks, or revealed once you destroy an opponent. Once you gather enough of these parts, the respective car, weapon or track will be unlocked.

After a race, you’ll earn money based on what you accomplished. This money is used to both upgrade your vehicle and weapon. If everything currently equipped is maxed-out, then the excess money will be converted to XP and help increase your level (only for show and achievements). As your car levels up, it’ll become stronger, faster and handle better, while your weapon will become more effective both with the amount of ammo you can carry and its power.

The game features about 10 levels that will have you traverse snow, desert, a race track, city, industrial zone and so forth. None of these are truly complicated, but you will need to learn strategies for each to help give yourself an edge. My personal favorite is Velodrome, both due to its simple layout and level aesthetic. For vehicles, we have sports cars, vans and trucks. Each can be upgraded in various ways, but none can be considered the “best”. I tend to lean towards Deliverator as it’s the fastest. 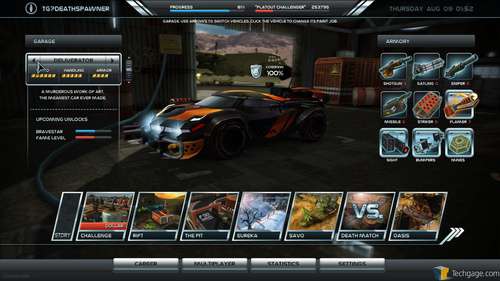 Scattered around each track are boxes which can be shot at or run over to reveal a power-up. These include wrenches to help repair your vehicle, nitro boosts, ammo and cold-hard cash. Because of the nature of the game, and the speed of each race, sometimes your success will depend squarely on what you manage to snag from these boxes. This is especially true with the final boss in the game. If you race him and you don’t get enough nitro drops, you simply aren’t beating him, unless by some extreme circumstance you manage to destroy him instead.

While the game is no doubt repetitious, it’s repetitious in such a way that it doesn’t stand out. Each race ends fast, so you’re constantly moving from track to track so that none can become stagnant. The flow of the game overall is good, and especially earlier on when you’re unlocking things left and right, the game is far from boring.

For self-appointed achievement whores, this is definitely the game for you. Normally, achievements aren’t even something I bring up, but the number of them here, and the ease of unlocking them, makes them stand out. In the first four hours of playing the game, I unlocked 50 achievements – and about 40 of those were just from the first three hours. Tack on another 3 hours and I currently sit at 70. Could it be that Remedy knew this many achievements would be a huge draw for a game that costs a mere $10? I’m not one to assume, but… probably. 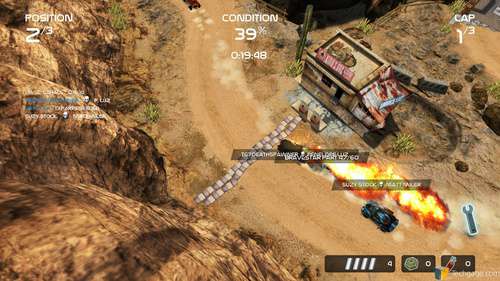 A sore spot with some Death Rally fans is that Remedy charges $10 for the PC version of the game while the iOS comes in at a mere $1 and Android’s version is free. I personally feel like drawing up a comparison at all is a little nonsensical. The mobile versions poke you with in-app purchases, while the PC version is entirely self-inclusive. The PC version also looks better and is easier to play – give me a gamepad over a touch screen for a game like this any day.

Currently, the biggest issue with the game is that the multiplayer aspect is a bit lacking, at least in terms of community. I was never able to locate another race, nor did I have friends who also owned the game to play against. If you’re looking for some MP action with this game, it’ll really help when one or more of your friends own the game. In that event, you’ll be able to create your own “channel” name and sync up that way.

As someone who hasn’t played the original Death Rally, I wasn’t sure what to expect from this remake. I’ve played similar games recently that bore me to death, but I can say I’ve genuinely had quite a bit of fun with this one. Despite having beat the final “boss”, I still have no intention of hanging this one up. It’s a great game to jump in quick and wreak some havoc. It has a lot of eye candy, features fast-paced gameplay and is a lot of fun. What more could you ask for?