Puzzle games have proven to be one of the most popular genres around, so it’s no surprise that the market is littered with such games. Not only that, but some of the true classics, we have seen recreated and updated time and time again. Not only by the official companies, but by fans also. Pingus, if you cannot already tell, is based off the ultra-popular Lemmings game. When it originally came out in the early 90’s, I am sure the developers did not expect it to catch on so rapidly!

Pingus is a true recreation and retains all of the core elements. It has pretty graphics and great sound… it’s a well put together package. Of course lemmings won’t do in a Linux game, so we have mindless penguins to deal with! 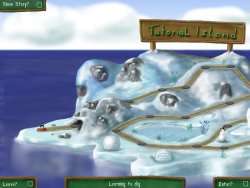 You have a bunch of penguins on the loose that really don’t know how to think for themselves. So, they run into walls, walk off cliffs, et cetera. You must tell them what to do, whether it be dig or float. The goal is to safely guide all of your penguins into the exit, which just so happens to be an igloo. Sounds simple, but it gets challenging quick. In order to succeed, you must use strategy and actually ponder your moves. You cannot just jump in and randomly click, or you will lose.

The game looks great, it really does. It has a fixed resolution of 800*600 though, which I found to be way to small for this game. I found myself having to mouse around the entire screen often, and it just became a chore. 1024*768 would have been a lot better. 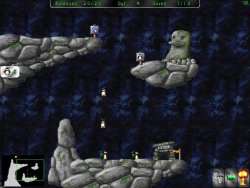 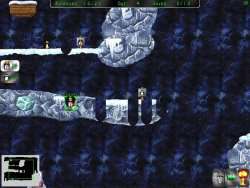 If you get bored with the ~20 included levels, there is an included level editor to allow you to create your own, and to share. Many levels can be downloaded from this unofficial resource. So, it’s no doubt this game has some longevity. Many of the downloadable levels use new graphics and textures to keep things interesting. If you are a fan of Lemmings or any strategic puzzle game, you will want to check Pingus out.

If you enjoy playing with balls, then Neverball should be right up your alley. The game is quite similar to Super Monkey Ball for the Nintendo Gamecube, so if you’ve played that, then you know what to expect here. The game premise is simple… you have a ball and are required to move it around the level collecting a set amount of coins. Once done, you must make it safely to the finishing portal. It sounds simple, because for the most part… it is. 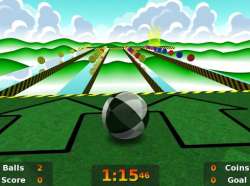 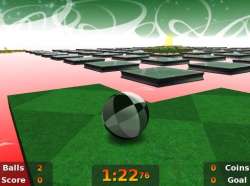 The game is divided into three difficulties, the first being the easiest. It really is… because you can storm through all twenty levels there in good time. Once finishing that difficulty, you are left with the “Hmm this game is not so hard.” mindset. Of course, that’s until you begin the next difficulty, then you suddenly realize that this is a game that tests your coordination, and patience.

Each level has a time limit, so you can’t just dilly dally around and watch the level beat itself. The game is entirely controlled by the mouse as you can imagine, and the camera view is constantly close to the ball. I hoped to have an option of zooming out a tad, but there was none. You are however, able to edit the configuration file to your liking. It would have been nice to have this accomplished through in-game options though. 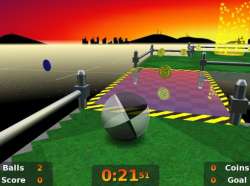 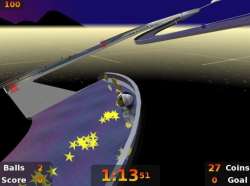 You are also able to save and replay your runs, for personal reasons or for a clear way to brag to your friends. As you can likely tell by the screenshots, the game has incredibly clean graphics, full of eye candy. So, you will need a decent video card and CPU if you wish to play the game at its smoothest.

Neverball is almost like two games in one though, because Neverputt is also included. It runs on the same engine, but is a mini-golf game. It supports two players, so it’s some great fun with a friend. Overall, Neverball is a classic that’s quick to get into whenever you need a quick break.