Nexuiz proves to be one of the most popular open source FPS games on Linux, and for good reason. The game engine used is DarkPlaces, which is a heavily modified Quake 1 engine. That’s evident in the graphics. If you’ve ever played Quake 1 deathmatch, then you are aware that it was one of the pioneers in what it did. Jump in, have some quick fun and log oback out. Personally, it was the first game that I played online quite often. Nexuiz tries to go back to those roots, and delivers for the most part.

The first thing you will notice about the game is that it’s gorgeous… the graphics are amazing, considering the engine it’s based on. It includes a lot of eye candy… even HDR! So, this is one game that will actually take full use of your high-end graphics card if you have one. 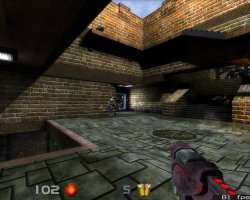 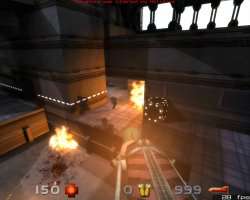 The premise of the game is simple. Jump in, kick some ass. Rinse and repeat. There is a large array of levels included, even some low-grav specific ones. The game actually reminds me quite a bit of Quake III… with the level design and weapon selection. All of the weapons look different than most of what you’ve seen before, but all act relatively similar. For instance, you will start off with a standard blast gun, but can also pick up a shotgun, rocket launchers and even a rail gun… which does a LOT of damage.

Though the game is deathmatch based, you don’t have to play online if you don’t want to. There is a single player campaign, though it lacks a story mode of any sort. As you progress through the SP levels, they get increasingly more difficult. The first few you will not have to repeat, but once you make it up a little ways you may need to replay the level a handful of times before beating it. Although you have to unlock the levels in SP to play them, all of the levels are available online at any given time. 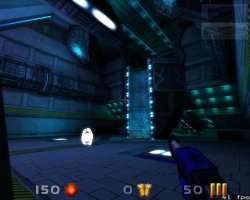 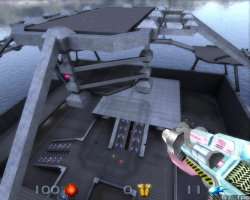 Nexuiz is a game that grabbed my attention for a few weeks… I had a blast. However, it can’t be compared to Quake or Unreal Tournament in terms of gameplay, because there are modes missing and the control is not near as ‘tight’. However, Nexuiz is a prime example of what great open source software is all about. The game is packed with deathmatch action and will keep you going for a while. Heck, it may even take you an hour to just deal with the graphic settings ;-)

When Return to Castle Wolfenstein was first released, it was hailed quickly by online gamers. It was a blast to play and had great graphics and sound to boot. Shortly after this, Enemy Territory, originally slated as a commercial expansion pack, was released entirely for free. In early 2004, the source code was released making it easier for modders and those working on total conversions to get things done. 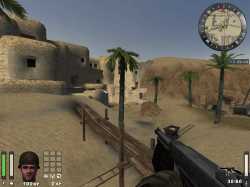 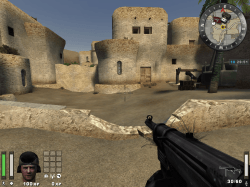 While there are many online FPS games for Linux, this is by far one of the most in-depth and realistic. This is a standard Axis and Allies fare, with five different classes to choose from. The game includes six official maps, but there are far more than that available online provided by the modding community. This game, in a sense, is like Day of Defeat for Windows, and also Counter-Strike. It’s like DoD because of the standard gameplay, but CS in the sense that once you die, you stay dead until the round is over or until the timer hit its mark.

Since RTCW was released in late 2001, you can expect graphic capabilities from that time period. Though five years old, the game looks great at high resolution with all the eye candy enabled. The sound, from what I remember is great to match. Now, I was unable to give this game a good test on my rig, because the sound ceased to function for whatever reason. I didn’t look too deeply into it, but it seems to be a semi-common problem. 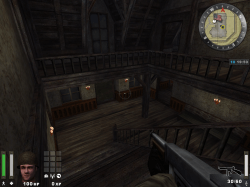 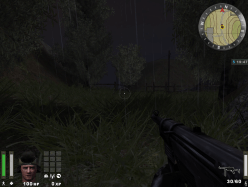 ET has a sequel on the way, Quake Wars, which will be a commercial game and obviously not be free. It should reflect a lot of what made ET so popular, but improve on all gaming elements. The screenshots from the game look like it will be completely revamped in every way. It will be based on the Quake IV/Doom III engine, and will likely be available for Linux at the time of launch.

So, if you are craving some good Axis/Ally online action, ET will fill your stomach with all of its tasty goodness.