If there ever were a popular puzzle game for Linux, Frozen Bubble would be it. Based off what we have seen with Bust a Move, Frozen Bubble is a rather simplistic puzzle that that requires some sort of strategy to succeed.

The game board is filled with multiple colored balls, and it’s your goal to match three or more of the same color to get rid of them. Sometimes the game board begins with more than three coupled together, but they don’t just go away on their own. What color ball comes next is completely random, so you must use some strategy to make sure that you are not going to get caught in a dead end. If you do take too long for a move, it will tell you to hurry up. After so many throws of a ball, the mechanism on the top will push all of the balls down a notch, making things more difficult. 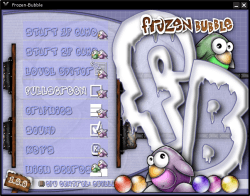 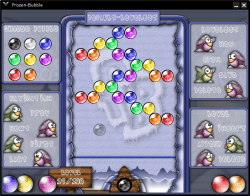 As far as I can tell, once you make it to a certain level within a game, you can continue trying it over and over again until you finally do beat it. Or, if it becomes too much of a challenge, you can just quit. When you finally do quit, you will be placed in the high scores list, showing you which level you made it to, along with how long it took.

I have to say that this is one addictive game. I started it up, and an hour flew by before I knew it. It’s amazing how addictive some very simple games can be, really. I am impressed with the game as a whole, but wish that you could adjust your resolution. It’s set to 640*480, so it doesn’t look at that sharp. My only real complaint would be the lack of mouse support. Personally, I would find it much easier to control the dial at the bottom with the mouse, but the keyboard is the only option. 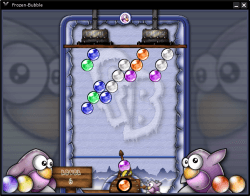 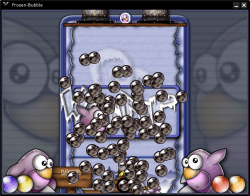 In addition to the single player game, you are also able to play against a friend on the same PC. If you happen to get bored of the included 100 levels, you can easily create your own, or even edit the ones that are default.

Frozen Bubble is meant to be a quick jump in and go type of game, so there is no real depth. There are only 7 different colors also, and none are added in later levels. So, it does lack some things I’d like to see, but it’s still quite a fun game overall. It successfully sucked an hour out of my day, so that speaks for itself ;-)

Here is a game that was constantly being noted as a great game, but I have never even heard of it until recently. Wesnoth is a fantasy turn based strategy game that is truly cross platform. It’s not only available for Linux but also Windows, BeOS, Mac OS X, FreeBSD and others. David White, the creator of the game, based it off a few Sega Genesis classics. He wanted the game to be rather simple to play, yet have strong AI. He strongly believes in the “Keep it Simple, Stupid” analogy, so you can’t expect deep gameplay that will drag you away from real life for hours at a time.

You can start off the game with a tutorial, which is rather well done. Your ‘master’ teaches you how to do things, and within minutes you are off killing. In the end, you can build a huge army of different fighters throughout different classes. Each of your units have various stats that build up as they level. You can go into each panel and view their weakness, and even see how their defensive abilities differ depending on which type of terrain they are on. 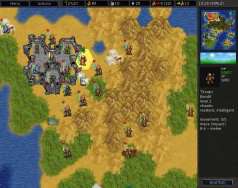 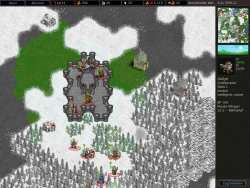 The game is based around factions… six in total. Depending on which you choose, the races vary. If you choose Knalgan Alliance for instance, you will be dealing with Dwarves, which are powerful but slow. As you would also expect, there are campaign missions to be had, each with three levels of difficulty. You can even download more through the game, most of which are user-created.

Like some other strategy games, Wesnoth is build on a hexgrid board, so your character can move in one of six ways.

The graphics in Wesnoth are nothing incredible, but they are crisp and colorful. The primary sound in the game is the overbearing music, which I found myself turning off pretty quickly. Not because it was bad, but because the bass was making the rest of the household angry ;-) 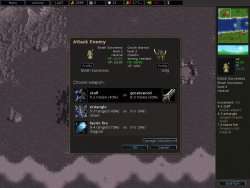 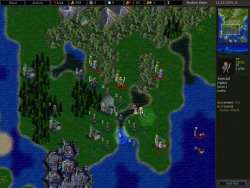 I am not a huge RTS or TBS fan, so I didn’t play Wesnoth for any significant amount of time. However, it has a very active development team and a huge fanbase, so you can expect this one to continue on for quite a while. It must be good to hit #1 in our list! So do yourself a favor and give it a go.