I’ve been using Vista frequently since it lost its Longhorn code name. During that time, I’ve found one annoyance after another that just makes me ask, “Why did they do this?!” Read on to share my gripes and maybe even agree with me.

Vista has been on everyone’s radar for quite some time now and with that, there are a lot of complaints about why certain things are as they are. Vista has come a long way since Longhorn but it still has some issues that make me scratch my head. This is not a Vista bashing article by any means. So far I’ve been impressed with many aspects of the OS and find the RTM leaps and bounds better than Beta 2.

After talking to many friends, it appears I am far from being the only one who is confused about some aspects. Some say, “I’m sure they will fix/add that.” Well, not at this point in time. Vista has been in final release state since November, so nothing major will be changed between now and a Service Pack.

That said, I don’t expect everyone to agree with me. Whether or not you do, feel free to speak your mind in our forum thread once done reading! Take a deep breath. Here we go…

“Windows needs your permission to continue.” Oh really? So going into the Control Panel and double clicking an icon wasn’t enough of a confirmation? For those who are not sure what I am talking about, chances are great that you’ve never touched Vista before. When the time comes that you need to change some form of configuration, you will get a prompt asking you if it’s ok to continue. It’s highly annoying but in all fairness, this nag -can- be disabled on a per user basis.

I’d agree in saying that sometimes a prompt like this is important. Sure, it’s a good thing to ask when you want to open up a partitioning tool, but to change the date and time? To make matters worse, any time such a prompt pops up the entire screen dims while only this window box remains in focus. While this doesn’t seem like a big problem, it can happen when you are least expecting it. Because of this, it can be headache inducing after having it happen a few times… at least with me personally.

It seems like Vista is trying to be more Unix-like in this regard, but I don’t know anyone who would willingly put up with it. Maybe in an environment where uptime is an absolute must, that I could understand. My solution to this is a new question at the installation screen.

Are you a noob?

Depending on your answer, it would change various options to cater to what type of user you are. If you are experienced, you shouldn’t need to be asked to perform various functions. Chances are good that you know full well what you are doing.

When Beta 2 became available, I quickly noticed that some meaningless tasks took a while to complete. Most notably, deleting a shortcut off the desktop such as Internet Explorer. I could never figure out why it took 7 seconds to remove a 2kb shortcut. This was a Beta OS after all, so perhaps it would be fixed in the final version.

I haven’t run into the problem as much with the RTM, but it still lingers in certain areas. There were a few instances where I copied a very small file and actually had a progress bar stay on the screen for a few seconds. I may be impatient, but you really shouldn’t have to see a progress bar due to moving a > 1MB file.

At some points during use, you may wonder if the current process is actually doing anything at all since some of the progress bars are infinite… they simply loop. This is not one of my biggest gripes though, as it’s still been vastly improved since Beta 2.

This is a common complaint I heard at CES two weeks ago from friends. Countless people who are making the Vista leap will be experienced users. I’ve personally used Windows since 3.x, so I’ve become well accustomed to where things belong and how things are handled.

In general, some of the most common aspects of the OS that experienced users want to access are kept in a different place than in XP. One instance is the Display Settings. In XP, you right-clicked your desktop to access the properties. In Vista, you have to go into bloated menu called Personalize. Then, the Display Settings is the absolute -last- option on this list. 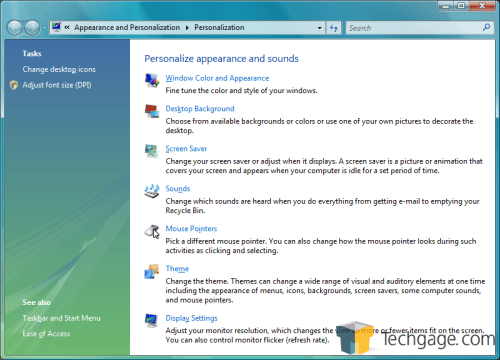 There are other instances that I won’t get into. If you are a regular Windows user, you will know what I am talking about quick.

DRM has been a touchy issue with Vista since 2005. For those unaware, DRM is the technology schemes used to protect copyright files. It’s the same thing used in the music you purchase online and similar to the protections put on computer games and DVD movies. Fact: DRM is a pain in the ass. I don’t believe for a second that Microsoft is putting DRM at the forefront to anger customers, but rather to avoid confrontations with media producers. Just take a look at how Universal is riding them over the Zune.

One feature included in Vista is called OCP Management which takes advantage of various DRM schemes. Most notable is the popular HDCP, a standard that has been getting a lot of attention as of late. Machines using Vista will be unable to play high-definition content such as Blu-Ray and HD-DVD without a capable monitor that supports HDCP. If you are in the situation where you are planning to buy a new monitor for the sake of watching such content on your PC, you will want to make sure that it is fully HDCP-compliant.

There are many other instances where DRM could come into play. Imagine being a fan of a new blockbuster release and wanting to take a small audio snippet from it to use as your Windows startup sound or for use in your IM programs, but not being able to. All ethics aside, there’s no doubt DRM has become a burden, but it plans to only get worse.

This is somewhat relative to the “Are you sure?” section. Vista is great at making simple tasks difficult. Using the OS for a single evening will prove this quick. Think that task could be done in one step? Hah! Try four or five.

As a rule of thumb, I think the Vista developers decided to put at least one step in between whatever it is that you want to do. I’m not even talking about the constant nag screen, but rather a menu or series of menus that you must navigate through to get to your destination.

Lack of ease may not come to everyones minds, but I am a huge fan of simple. Something Vista goes completely against.