I’ve been using Vista frequently since it lost its Longhorn code name. During that time, I’ve found one annoyance after another that just makes me ask, “Why did they do this?!” Read on to share my gripes and maybe even agree with me.

If there’s anything that stands out in my mind from Windows XP besides the 900 major security holes, its the reaction from the community in regards to the activation and WGA scheme. The fact is, WGA is a huge annoyance and primarily inconveniences those who legally bought the OS. If for whatever reason you never felt the bite of WGA, it was essentially a way to force people to activate their Windows before being able to download specific software or use Windows Update. Of course that doesn’t seem so bad, but it was when WGA screwed up that people started their rants.

Since this past Summer, I’ve installed Vista around 30 times (no I’m not proud to admit that) without much of an issue. Until recently, that is. When trying to access one of my installations the other day, I received an error box telling me that I needed to activate. I found this odd since I thought I activated it directly after install. Though, I have more than one installation so it’s no real surprise if I did overlook it.

This happened last week, so I only vaguely recall all of the options, but I remember one that gave the ability to change the product key. This is great for those who end up with a pirated version of Vista in the future. You can just get a legal key and enter it here. But, this is one thing that happened with XP that didn’t work out to well. Some folks got locked out of their machines for days while waiting for a new key from Microsoft. The important thing to remember is to activate right after the install to make things easy on yourself. It literally activates in under ten seconds, so it’s not a huge deal.

One thing I will mention though, is that I was lucky to have my WiFi properly configured before this happened. When I was prompted to activate, it did so without issue. Had the internet not worked though, I am unsure what steps would need to be taken to regain control over the system. I can see some fun times ahead… 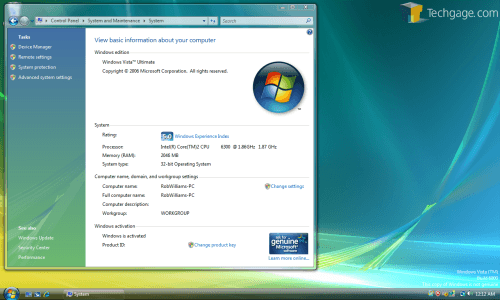 Am I genuine or not?
#2 – Hard To Customize Boot Loader

For those who have a single OS installation, this gripe need not apply. For those who have numerous installs of Windows and Vista, this becomes a pain quick. I will begin with an example. On my main testing rig, I have six versions of Windows. When booting up, I see this menu:

You might ask how I know which is which? Exactly. That’s the problem. Included in that list are two versions of Ultimate, Home Basic, Home Premium and Business. In order to figure out which is which, I have to go into each one until I see the proper login screen. Another option is to recall the order in which I installed them, since the oldest is listed last. 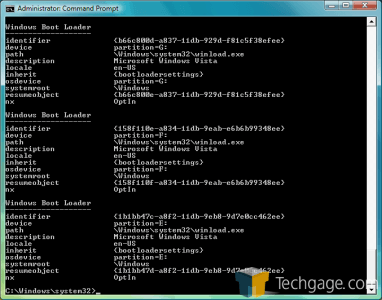 In Windows XP, the boot loader was simple to edit. It was a matter of opening the boot.ini and changing the name of the entry to something recognizable. There’s no such thing in Vista since the boot loader has changed drastically. Now, you need to use a program called bcdedit to manually change the names of the installs. I consider myself to be an experienced computer user and even I don’t want to screw with a boot loader like this. Regular computer users certainly won’t want to bother with it!

I have mentioned that the RTM is far superior to Beta 2 and I mean it. The system overall is much more responsive and many common bugs have been squashed. Still, I’ve run into many various bugs in the past two months. Not surprising though, this is not exactly a small application we are dealing with. I will touch on a few here, but this is only a small few of all the ones I’ve encountered. I am not picking out Vista to be a buggy OS… all OS’ are buggy. I run into bugs on my Linux machine every other day. That said, your experiences will also vary. I have found that a lot of factors come into play with these as well. For example, I’ve encountered some bugs in one install but not another.

One bug I’ve discovered in more than one install has to do with the Games folder. Vista will auto-detect notable games that are installed and throw in an icon for quick access. Half-Life 2 is the game I’ve run into problems with. Even though Windows took it upon itself to add the icon here, double-clicking it resulted in an error… everytime. Not all games are like this though, as Oblivion started without issue.

Here is an example of where one installation of Vista shows a bug while the other doesn’t. For some reason, one of my Ultimate installs will not give me a Windows Experience Index rating of more than 1. The reason is the video card, despite the fact it works fine. Aero works, as does Half-Life 2. I refreshed the rating a few times (even rebooted) but I still get a 1 overall. This is not a big issue since it doesn’t halt performance in any way. It does show how the OS is still very finicky though. 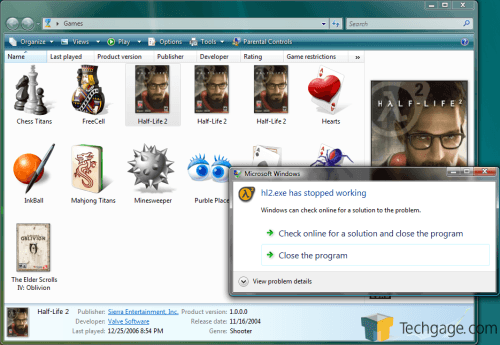 The last “complaint” is not so much of a complaint, nor bug. Rather, it’s realizing the fact that a lot of your common software may not function in Vista as you’d hope. This was a huge issue in Beta 2, but has been fixed up so much since then, it seems non-existent. There are still lingering programs that won’t work properly though, and likely never will. Reg Supreme is one of these programs. It’s a program I’ve come to rely on quite a bit, but the copy I have is over a year old. The program runs, but it doesn’t accomplish any of the tasks I set it out to do.

Sony Vegas 7 is another. It loads, but gives me an error on each startup. Diskeeper 2007 is one of the biggest ones for me, since it’s a great program. It won’t work in Vista though. But for those who own it, hope is not lost since there is a Vista specific version available. The fact is, you will not always be out of luck if your software doesn’t function. Chances are good that the developer has released a version capable of handling Vista. If not, then the loss of use of the program is something you may have to deal with, if the backwards compatibility feature doesn’t work in your favor.

Whew, that was a lot of complaining! It’s apparent that Vista will not always please everyone, including myself. Overall, I have been pleased with my experiences in using Vista but some things I’ve mentioned really grinds my gears. As with any new major OS upgrade, problems are to be expected. But, some of the complaints I have don’t have anything to do with bugs, simply “Why did they do things this way?”

In the end, I still like Vista for what it is. Hopefully such things like compatibility will get sorted out in the coming months so that your primary software and games will work properly, in addition to drivers. Vista handles many things well, but you should prep yourself for the worst and know that you may have a good deal of tweaking to do.

This is our second Vista specific article that will be published this week. Stay tuned for content the rest of the week and make sure you read through “Should You Buy Vista Ultimate?”.