Amarok is one of the best audio players for Linux, but there is a lot more it can do than just play your tunes. We are taking a look at our top five tips of things you can do with this amazing player.

A part of the KDE suite of applications, Amarok has been around for a while. It continues to be one of the most widely used audio players in Linux, partly in thanks to the fact that it’s included in many distros. It was originally developed as a means to replace and outperform XMMS, and oddly enough it was those goals that made me first give it a try. Despite the fact that I’ve been using Amarok for a few years now, I continue to stumble on features I didn’t know existed, and also easier ways of handling simple tasks.

In this short article, I will be relaying a few of my favorite features of Amarok that you just may not know about. I have to mention that depending on your distro or method or installation, some features may not be automatically available to you. Also, some of these features are more obvious than others, but might be largely ignored for those lacking investigative motivation ;-)

There are numerous reasons why you should be interested in streaming music. It could be that you have more than one PC, but only one static location for the music. Or, you might have a small Linux rig that doesn’t have sufficient hard disk space to house a large music collection. Whatever your reason, streaming music from another device is simple.

While this is not an Amarok feature directly, as long as you know the devices IP address, you should be able to connect to it if it’s set up as a server. This is not limited to other Linux boxes, but Windows machines as well. This will likely work the same way with Mac OS X machines, but I don’t have one around to test with.

What you need to do, is simply figure out how it is you can connect to another machine. If you have a Windows home network running, chances are there are shared folders. If you have Samba installed on your machine, you are already there. Load up your networking folder, connect to the PC you are after and save the address that’s in your address bar. For example, the address to my primary Windows machine is:

My router has a hard drive which I can store files as well, so to connect to it I use this address:

If you have another Linux rig that houses all the music, connecting will be easy as long as it’s running an SSH server. To connect to my laptop, just as an example, the address is:

Computers are not the only machines that can be streamed from however. If you have a NAS box, or a router as in my case, you can connect to it through various tools. If you have Samba installed to connect to a Windows machine and an SSH server installed on your target Linux machine, you are already half-way there. Because there is so much bandwidth available on a normal home network, you can even stream lossless music without a hint of lag.

If you are one of the few people who’ve never heard of Last.fm, it’s essentially a social networking site for music. As you listen to your favorite bands, their names will be uploaded to your Last.fm user account for others to peruse. Based off of your music profile, you can search for other music that may meet your tastes, as well as meet other people who share similar music interests. 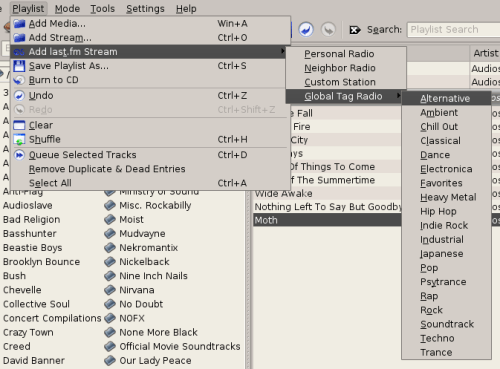 Last.fm support is well built into Amarok, and it’s as simple as setting your login/password in the settings. Amarok will then upload the statistic each time you finish a song. It goes beyond that though. You can also listen to various Last.fm internet radio, the most common being Neighbor Radio, which plays similar music based off of your profile. From there, if a song is playing that you either love or hate, you can right click it and state that fact. If you hate it, it will no longer play.

This is one of the best features of Amarok, but it’s hidden away so many might overlook it. The scenario to fit this feature would be having a song file that contains incorrect info or has no ID3 data whatsoever. In my case, I had a file called 03.flac and wanted to find out the name. Of course, I knew who it was since I purposely set up this scenario, but that’s beside the point. 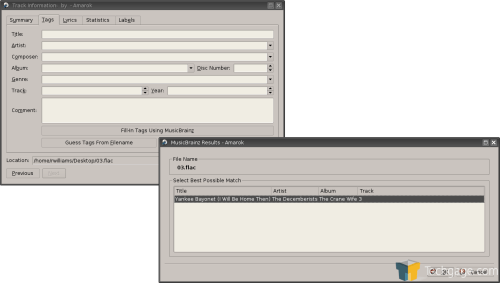 When you right-click and open up the properties, you can click the “Fill-In Tags Using MusicBrainz” button which will utilize that service in order to find the name of the song. It accomplishes this through some creative algorithm, and in all of my tests, it has worked quite well. It doesn’t matter the genre… I’ve even had it detect song names from trance music. Some of your rarer songs may not pass the test, but it’s worth a shot anyway!

Magnatune is a unique music service that has a goal of delivering music to fans for prices they set. For example, you can purchase a downloadable or real CD to be shipped from them, for between $5 – $18. It’s up to you to decide what price you want to pay, which would generally be determined by how much you enjoy the band. There are many ways that the music service could be improved, but I won’t get into all of that here. 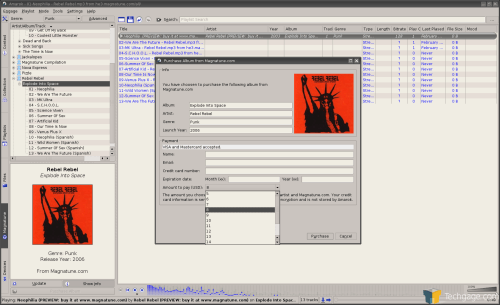 If you are using a recent copy of Amarok, you might have noticed the Magnatune tab to the left. Here, you can browse the entire Magnatune catalogue and preview any song, or entire albums. All songs are offered in 128Kbits format, with watermarks at the very end of each song.

Should you listen to an album that strikes your fancy, you can purchase it through Amarok directly, vital information and all. Though the Amarok developers state this is done through a secure transfer, there is nothing mentioned about it in their documentation. Once a purchase has been made, you will receive a URL that will lead you to download the album in either MP3, FLAC, OGG or lossless WAV. If you are a current Magnatune shopper to begin with, Amarok makes the entire experience much more enjoyable. 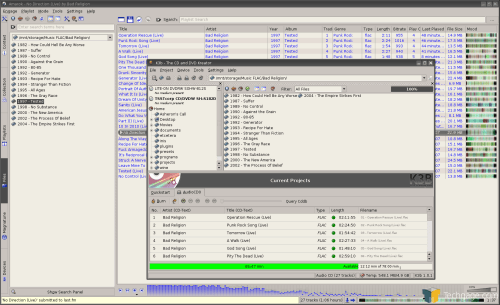 As it stands, k3b will properly load playlists into it’s UI to create an audio CD, but Amarok makes it even easier. Once you have your playlist ready, hit up the Playlist > Burn to CD and k3b will launch with that playlist ready to go. You just need to pop in a blank CD and you are off to the races. This can be done not only for audio CDs, but MP3 discs as well.

If there is one thing you should take away from this small article, it’s that Amarok is much more than a music player. This ‘Top 5’ is my personal top five. Yours may be different, and no doubt I have skipped one of your favorites. In fact, there are many, many more features that would take a far longer article to cover. How about moodbar? MP3 player syncing? Stats tracking? Lyrics? Band info? 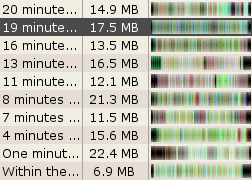 The possibilities are almost endless. If you have a favorite feature, feel free to hop into our forums and let the world know!