by Brandon Mietzner on October 8, 2012 in Gaming

A noticeable and welcome improvement Torchlight II has over the original is that the enemies and bosses are greatly varied. There wasn’t one time I felt I was fighting the same type or same looking enemy from on chapter to the next.  The bosses weren’t cut and pasted, they all felt like they had their own style of combat and that made each victory that much sweeter when I pulled their loot from their cold dead hands, tentacles or trans-etherial mist.

Torchlight‘s companion pet was something many people enjoyed in the first game and it continues to be very beneficial in Torchlight II. The most praised feature of the pet was being able to send your pet to town with useless gear to sell and return with the spoils; Runic has now made it possible for you to send your pet off with a shopping list and return with items you will need from a vendor in town. This is obviously a beneficial feature in multiplayer games. 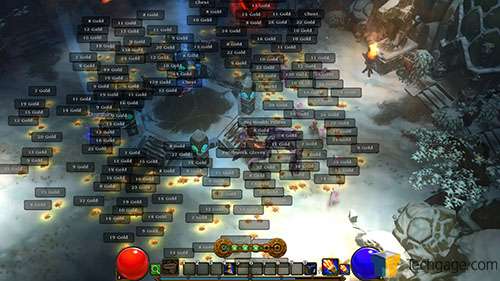 The AI can be a little hit or miss when it comes to combat and path finding. There were many times I would attack someone from a distance and they wouldn’t retaliate; a similar situation would happen to my pet, he would be attacked but not fight back from time to time. The only complaint I have about the pet is that the movement animations all looked exactly the same. Sure, the pets looked different, but they all moved the same way. The AI path finding for pets, minion and enemies can become problematic in small areas. If you are playing an Engineer and relying on your healing bot, and it can’t discern how to get down to you, this can lead to a quick death. There have been improvements to these issues since launch, and I hope to see them wiped out soon. 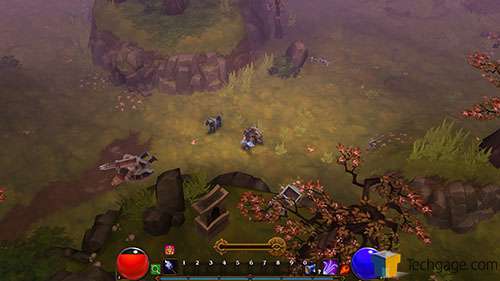 The loot is tied to two different requirements, the first is your level and the second is your stats. If your stats are high enough to wield the item but your level isn’t, you can use the item. This isn’t a new way of handling items in an ARPG, but it is certainly the least restrictive for situations like those. All of the game’s items provide raw numbers when looking them over, this along with the quick view of what you have currently equipped makes sorting new items quick and easy. This is obviously another beneficial feature in multiplayer games.

Torchlight II‘s graphics are on par with what I would expect from a $20 game. I can’t help but notice that the world textures are not much improved from the original Torchlight. I would have liked to see some additional TLC for them but the rest of the graphics, especially the particles, look amazing. There are some performance issues that might be graphic or engine related; this can cause a dramatic drop in FPS at times. There are some minor issues with textures missing from some late level gear, but it’s only been limited to one set from what I have seen. 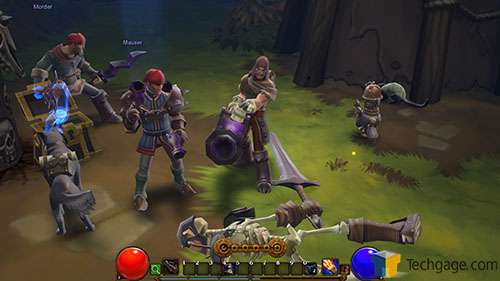 The multiplayer is sadly not perfect and does suffer from sync issues. There were many times when the person I was playing co-op online with, their name would go to the generic class name, I couldn’t see their animations or weapons and vice a versa; this did not affect the combat but it was difficult to gauge where they were attacking so we could best coordinate our attacks. There were a few times in the dungeon we were in didn’t match up 100% either; it wasn’t game braking, but it was confusing. 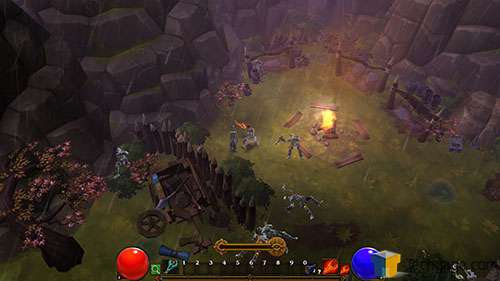 Torchlight II sadly only provides limited multi-monitor support, but a feature that I am sure I won’t be able to live without in future ARPGs is how the map overlay works here. The map can be enabled to display as a transparent overlay on either the center, left or right monitor. I hope that Runic enables support for the other hud elements to fit on the center monitor, it’s a pain in the neck to look at the far edges of my left and right screens to look things over.

The music manages to give each area their own unique feel, but is still as foreboding and inspiring as the original sound track. There have been a lot of tracks added for Torchlight II and it does not disappoint in any way. The only downside related to the audio is there is no master volume control bar, so trying to calibrate the game for third party VoIP programs can be a little problematic to get everything back to the way you want it solo.

In the end, Runic built upon what made Torchlight I good and they made Torchlight II great. I enjoyed myself the entire way through, even despite the problems noted here and there. There is room for improvement, but I am encouraged by my past experience that Runic will listen to their customers to make positive changes for everyone. Torchlight II is well worth the $20 and if other ARPGs this year have left you wanting, this will take care of that need in spades. Easily an Editor’s Choice.