In our PC Mark tests, we can really see how CPU intensive the HDD tests are. Don’t take these comparison scores too seriously, as the laptop is far slower than the dual core AM2 rig. However, you should expect similar results if you have a smokin’ new laptop, such as one with a Core chip. 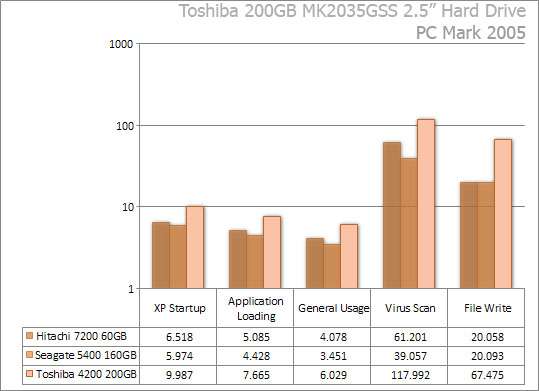 Nothing shows true performance of a hard drive than a real world test. To perform one, I have three groups of files that are copied from one portion of the drive to another. Here are the exact filesets I use:

All results are in seconds, and since speed is the factor, lower results are better. The first two sets of results are that of desktop drives, so it’s no surprise they obliterated the small 4200RPM drive. Five minutes to copy a 4GB file is hefty, but I had actually expected it to be worse. 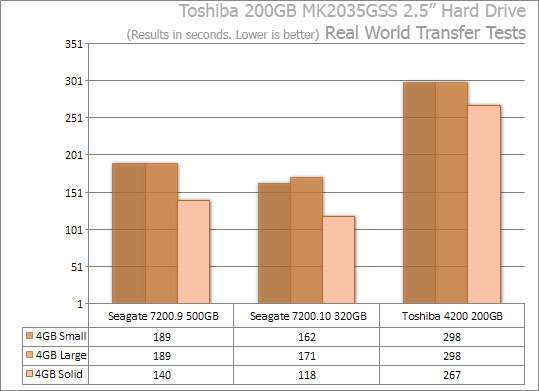 I have to give kudos to Toshiba for being the first out the door with a 200GB 2.5″ hard drive. Seagate was on such a rampage that I was confident they would be first. However, while the drive delivers on it’s promises, it’s hard to recommend it to anyone.

In this day and age, large storage hard drives are not usually a bonus, but a requirement. Those who use laptops as their primary computer usually get shafted in that regard, and have to use an external hard drive when they are at home for normal storage. Of course, 160GB may prove plenty for some, but for those who have larger music or movie collections, it’s completely laughable. So… to see a new 2.5″ drive be released with a higher density is surely welcomed.

However, the sad thing is that each time we reach a high new density in the mobile storage market… the overall speed goes down. While raw RPM doesn’t mean everything in terms of speed, it certainly proved to make a difference in our testing. For a gaming notebook, 7200RPM drives are the norm, and 5400RPM are great for everyday users. Actually, 5400RPM proves fast enough for most regardless of what application you are using, including gaming. However, a quick look at our Read and latency results show that you will be lacking some speed if you choose a notebook with this drive over another. 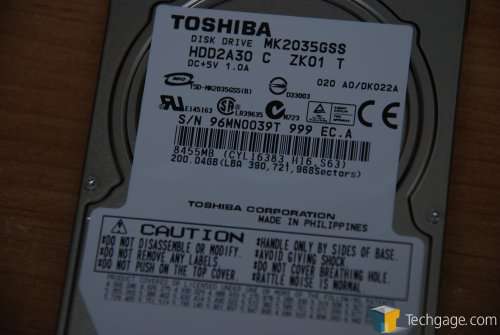 Don’t get me wrong. This is a great drive for it’s density alone. In some tests, the speed actually impressed me, but not to the point of being able to consider this drive over a faster one. This particular drive proves that we are at a lull in the 2.5″ storage market. There is a reason that Seagate released their 160GB as a 5400RPM, and didn’t even release a 200GB at all. The higher we go, the slower the drive is. 2.5″ drives are so small in size, it doesn’t seem we will be seeing larger densities anytime soon, unless a new mobile standard is released that increases the drive size. I’m not talking about flash based drives either, since those are far too expensive at this point.

2.5″ drives are small as I mentioned, but even if they were twice as thick, they would -still- be rather small. I cannot see why such a drive would not fit easily in any laptop. The fact with a drive like that is though, that it could hold up to 200GB and retain 7200RPM if simple math is applied.

Another factor to weigh in here is the fact that you cannot purchase this drive as a standalone, as you can with Seagates 160GB offering. I am unaware of who all offers these drives in their laptops, but Toshiba obviously has them in a few of their own. One thing to note is that some of their higher end laptops currently are equipped with dual 120GB 5400 drives. Only a couple include the drive we have taken a look at today, so that may speak volumes right there. This drive is not ready for primetime.

Once we see a 200GB 2.5″ drive that’s 5400RPM with a ~14ms seek time… that’s when we should be excited. Until then, stick to faster drives with lower density, or pick up a laptop with dual 100GB drives if you want all that storage.