Toshiba’s latest AMD notebook offering proves that even those on a relative budget deserve a feature-packed model. Besides its 17-inch display, the P205D-S7479 offers nice harman/kardon speakers, a thumbprint reader, a large 250GB hard-drive, an ATI HD 2600 – all for a light price.


As mentioned on our intro page, the specifications for the notebook are not that high-end, nor low-end. Rather, they are catered more towards those who want a great notebook for a great price. The P205D-S7479 seems to be holding those two requirements together quite well.

The processor is AMDs Turion TL-64 dual-core, containing a 2.2GHz frequency along with 1MB of L2 cache. It’s far from being a powerhouse, but should get the job done fine. At idle, it sucks out 0.80v, while load inches up to 1.10v. The notebook also includes a standard 2GB of RAM.. perfect for the memory-sucking Windows Vista operating system.

The video card is a nice offering considering the notebooks price, but is still short of being a great gaming card, so don’t expect to be playing brand-new titles. Other things that stand out are the 250GB hard-drive and abundance of connectivity ports. There are six total USB ports and a card reader as well.

I am not a fan of the 1440×900 resolution, at all, but its become the new standard for value 17-inch notebooks. It’s definitely enough to allow you to handle a nice workload, but I still look forward to a time when 1680×1050 will be found on notebooks of this price range.

The setup of the notebook was as to be expected… simple. After the first boot, you will be required to enter user information, choose a wallpaper and then sit back and wait for everything to finalize.

Once in Windows, the first word to hit me was, “Wow, bloat!” Sure, that’s two words, but details as such are minor when you have this much bloat staring you down. There’s little doubt that Toshiba makes coin for having certain applications pre-installed, such as Google Desktop, but at some point it becomes far too much. I am far from being a minimalist, but I am not a fan of sitting around for a half-hour just to uninstall programs I do not want. 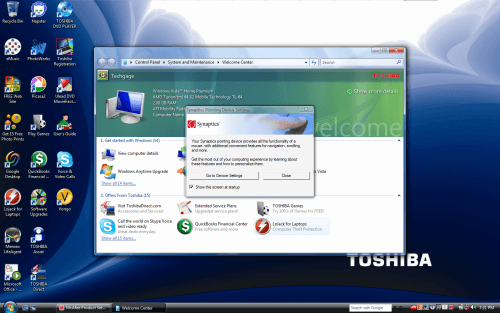 Ideally, I’d love to see a checklist be prompted after the first boot, and then from there the software would install only what you’ve approved it to. It can be argued that inexperienced users would be too confused, but nothing would stop them from hitting the “OK” button and bypassing it all. I actually found it quicker to wipe the machine and install my own copy of Vista… then install the drivers manually.

Trial software includes McAfee Internet Suite which will run for 30 days before nagging for a purchase. Microsoft Office 2007 Student also offers a trial, of 60 days, and asks for $149.99USD to continue usage after that time.

On top of generic bloat, I found some of the installed Toshiba software to be frustrating. For example, the webcam software includes an on-screen display which docks itself to the side of the screen and makes itself apparent whenever your mouse touches it. This could not be turned off, and from what I can see, it’s the only way to use the webcam outside of another application (IM, for example). If this dock is uninstalled, so is the driver. No driver = no webcam.

There is another system dock at the top of the screen, which drops down whenever your mouse is close. I wouldn’t mind this if the dock had a quick response, but it doesn’t. It’s slower than a Toyota Prius driving through melted roadway. Luckily, it can be uninstalled, which is fine since it serves no real purpose. It offers quick access to turn on and off various notebook functions, but I found it easier to just handle those tasks manually.