Toshiba’s latest AMD notebook offering proves that even those on a relative budget deserve a feature-packed model. Besides its 17-inch display, the P205D-S7479 offers nice harman/kardon speakers, a thumbprint reader, a large 250GB hard-drive, an ATI HD 2600 – all for a light price.


Toshiba did a great job with the development of their P205D-S7479 and I believe it’s worth the $1,300USD retail price. It includes a large screen (albeit with low resolution), fantastic harman/kardon speakers, a full-fledged Numpad, fingerprint reader, a whopping 250GB hard-drive and plenty of connectivity options – this model doesn’t falter on much.

However, as much as I enjoyed working with this notebook, I can’t help but notice other models in Toshiba’s own line-up that look to be of a better value. First, let’s take a look at the $1,149 P205-S7476, an Intel-based offering. It includes a 1.50GHz dual-core, which might be a little bit slower than what we have here in our AMD machine, but to make up for it, this model includes an HD DVD-Rom drive, allowing you to watch high-definition content at 720p. The included video card is weaker than that of our P205D-S7479, but as we’ve found out, the HD 2600 was not ideal for newer titles anyway.

How about the P205-S7482, an offering that retails for $1,400? It also includes an HD DVD-Rom drive, on top of an HDMI output – you could hook this up to your high-definition television while at home and enjoy full-resolution HD content. The hard-drive here is also 50GB larger, and included still is the HD 2600 graphics card. The 1.66GHz processor should not prove much slower, if any, than the AMD 2.2GHz that’s included in the P205D-S7479.

If I had to choose, I’d pick up the P205-S7482 due to its competitive specs and addition of an HD DVD-Rom drive and larger hard-drive. The CPU might be marginally slower, but overall it seems like a better value. 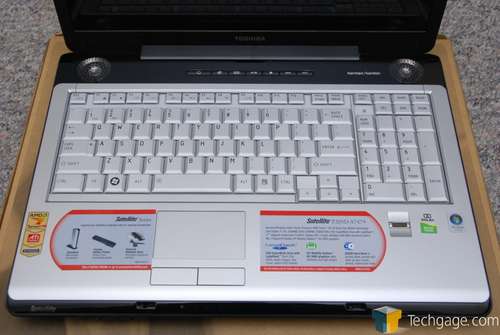 When comparing AMD notebooks to one another though, Toshiba proves to have a better value on their hands. For comparison, I went to the Dell.com homepage and built up an Inspiron. Though it’s $50 less, the Toshiba model offers improvements in both connectivity, audio and storage. Not to mention a better video card and the addition of a thumbprint reader.

I still cannot get past the lack of overall battery life on our S7479 though. An average of 85 minutes for DVD playback seems unreasonable for a “media” notebook. The video and audio quality while at home are fantastic, but a media notebook should at least be able to complete a full movie if brought onto a plane. This is another thing to expect of a notebook in this price-range, it seems.