When I received a press release from TRENDnet this past August touting the “World’s Smallest” travel router, I found myself with piqued interest. I’m not much of a networking guy, I admit, and very rarely does any sort of networking equipment jump out at me. But, the TEW-654TR was different. I travel a lot, and wherever I go, I always bring a standard wireless router with me, so the idea of being able to shrink that down to size sounded great.

The “TR” in the product’s model name stands for “Travel Router”, but as we’ll see, it doesn’t have to be used for that purpose alone. It’s a multi-purpose router that opens up a world of opportunity, and I’ll be covering a couple of cool scenarios throughout the review.

The primary selling-point of the router is of course its size, and to be honest, that alone is going to sell some people on it. There’s a major difference in size between this and a standard desktop router, and you can fit it anywhere, even in a filled-to-the-brim bag of a luggage.

Where a “travel router” shines is with the options it opens up when you are traveling. If you find yourself in a hotel room that offers only wired Internet, this router will allow you to turn it into a wireless connection, so you can kick back and not have to sit at a cramped desk. It also opens the ability to allow additional computers access the same net connection, whether it be room mates or multiple PCs you’ve brought with you. These two scenarios alone is where the TEW-654TR can shine, and they’re also the scenarios that tend to directly pertain to me, and I’m sure to many other frequent travellers.

Since the TEW-654TR is considered a “travel router”, I had assumed that the feature-set would be whittled down, but that’s not the case. Despite the lack of external antennas (there are two internal), the router supports b and g, and also n (draft 2.0) speeds, the latter of which can reach up to 300Mbps in ideal configurations. The operation frequency is 2.412 ~ 2.484GHz, while power consumption will reach a maximum of 2.5W.

While travelling, keeping your data safe is of unparallelled importance, and it’s for that reason that all of the wireless security standards are here, including both 64-bit and 128-bit WEP, WPA and WPA2, along with WPA-PSK and WPA2-PSK. Offering even greater control, the router also supports MAC address configuration and IP/URL filtering, and of course, a “hidden SSID” feature.

As you can tell, the router is no lightweight, and it supports all of what’s important to see from the big boys. Probably my favorite feature, though, is the fact that you can configure the router to use one of three modes. These include “Router”, which acts as a normal router, “Access Point”, allowing you to extend your wireless network’s range or to set up a private network and also “Client”, which turns the router into an adapter, essentially opening up wireless support on computers with none.

For even more intricate detail about the capabilities and specs of the router, I recommend hopping on over to the official product page at TRENDnet’s website. For now, let’s take a quick tour of the TEW-654TR and see what it’s made of. As I mentioned in the intro, TRENDnet claims this router to be the “world’s smallest”, and to be honest, even that didn’t prepare me for what I took out of the box. As you can see below, it’s actually smaller than my iPod Classic 120GB (6.5G), and of course, it’s much, much lighter as well. 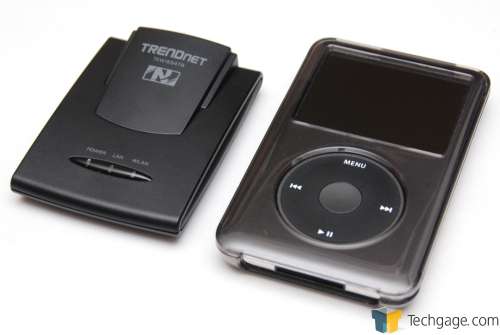 There’s not much to look at on the front, although the status LEDs could prove useful during the setup process. There’s not much happening on the back of the device, either, with the lone button being the switcher to choose between the three available modes. At the top of the device is the LAN port, the power connector, and the reset and WPS (Wi-Fi Protected Setup) buttons. Overall, the device is small, and since most of the configuration is done in the Web-based admin system, there’s no real need to over complicate things here. 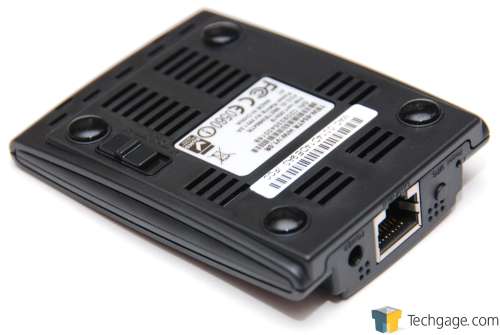 The router includes a few accessories that are imperative to its operation. Along with a flat RJ-45 LAN cable are two choices between powering the device. You have the option to use an AC adapter, or to take up two USB ports on the machine. The router might not draw that much power, but it’s apparent it draws enough to require more than one USB port. For notebooks with a slew of such connectors, there shouldn’t be a problem, but for those using notebooks with just two USB ports to begin with, the power adapter would be the ideal choice. 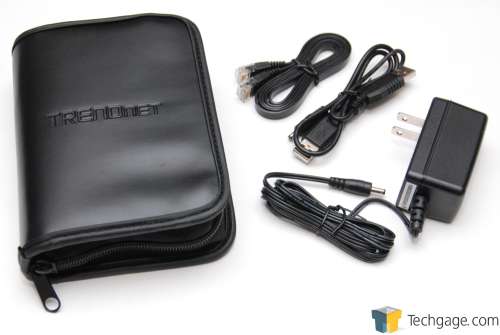 Along with the travel router, TRENDnet included one of its recent USB wireless adapters for use in our testing, also supporting the draft 2.0 n standard. An adapter like this is only needed if your desktop or notebook doesn’t offer draft n speeds, or if you’d rather take the USB route over any other solutions (for desktops, I’d recommend a PCI or PCI-E wireless card for improved reliability). 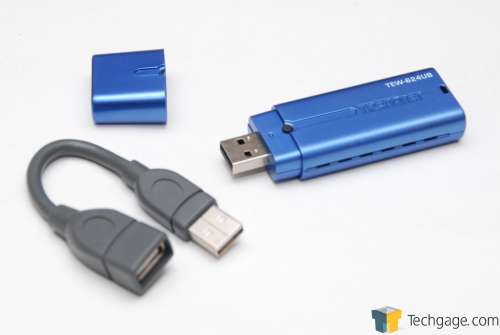 Going through our shopping affiliate, the TEW-624UB USB adapter is currently selling for just under $50, while the TEW-654TR travel router hovers around $70. This not the least-expensive, however, as a quick check at Newegg revealed an even better price of $55. It pays to shop around, as always.