The primary difference between using the TEW-654TR as a “router” or an “AP” is that the latter has a much slimmer admin system. The menus are all there, but the options inside them are barebones. This is because an AP doesn’t need advanced configuration, as for the most part, it’s little more than an extension of your primary network. 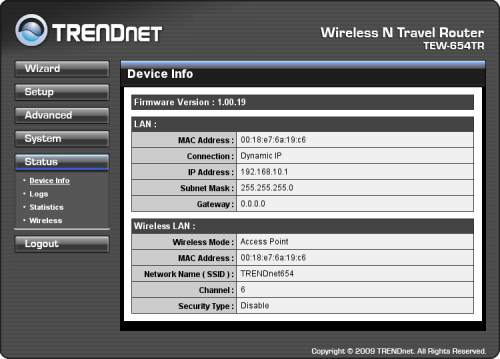 Although it’d be nice to be able to configure an access point without the use of wires, it’s just not possible here. Instead, wherever your AP is going to be, you’ll need to run a LAN cable straight to it. It is inconvenient, but the improved performance around the house is going to be worth it for a lot of people, or as I mentioned in the above example, you’ll even be able to get better reception outdoors, should you want to compute there.

Of all the modes available on the router, it’s the client option that I find myself most excited about. As mentioned earlier, this mode allows you to have the device act as a wireless adapter, in order to enable wireless connectivity on any computer that doesn’t already offer the support. The upside is that the router works fine on pretty well any computer, but the downside is that it’s a clunkier, and slower, solution than simply having a wireless card.

There’s more than one simple reason why I like this mode, but one of the main ones is that it enables you to add wireless to not only your computer, without the use of a driver, but other LAN-equipped devices as well. As an example of what’s possible, I had first set up the router to act as a client on my Linux PC, and when done, I plugged it straight into my Xbox 360. Because there’s a standard LAN cable between the router and whatever device you’re connected to, and also thanks to DHCP support, consoles like the Xbox 360 have no issues configuring the connection. 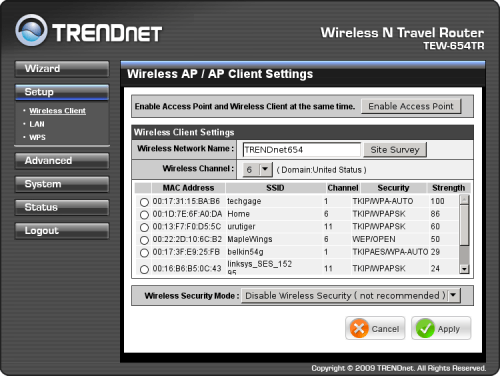 When I say the time and effort it took to get this working is minor, I’m not kidding. The process began with unplugging the LAN cable from my PC, and instead plugging the router to the same LAN port with the included cable. After I configured my LAN in my OS, I could go to the router admin in my browser, and there is where the wireless access points are found, and connected to. The device simply saves the information, even after it’s unplugged, so when you plug it into something like a game console or PC without a wireless card, the respective system’s operating system will simply configure it as a regular LAN connection, never knowing that it’s actually a wireless connection on the other end.

I’m sure what I’m excited over here isn’t entirely new, but to see it implemented in such an easy-to-configure means is, to me, unbelievable. It doesn’t matter what OS you’re running on your desktop, because the device simply acts as a LAN connection… it is just a router after all. Drivers simply don’t come into play here, so in OS’ where drivers aren’t always easy to install, like Linux, there’s nothing to worry about. It just works. 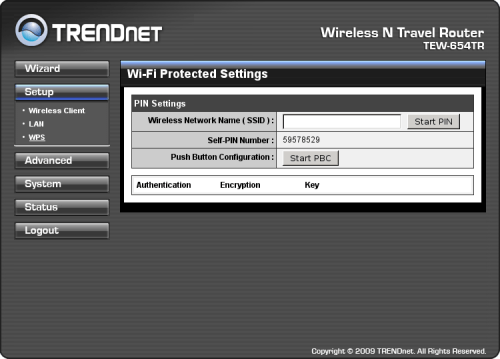 But, I also have to mention an unfortunate caveat. Because this is a router at the heart, it doesn’t offer the same kind of performance that a real wireless adapter would. In file transaction tests, it hovered at around 500KB/s, compared to 3MB/s for wireless G and 3MB+ for wireless N. The latencies are also higher, sporadically jumping from good to bad. So while the adapter might work in a console like the Xbox 360, it’s not going to be the ideal gaming router.

I did test this out, however, with a couple rounds of Halo 3. In all honestly, I actually found the latency to be quite good, and on the player summary page, I almost always showed as having a full connection, or with one bar lost. But, I also had an occasion where I was in the red (this wasn’t obvious to me in the game, but I wasn’t in a dual at the time). I’ve never had superb wireless performance in the room I use for testing, though, likely due to interference, so you might experience better performance than I did, but it’s impossible to say. I can’t outright recommend the router for this use, although it’d work in a bind. Outside of games, for simple things like downloading demos off of Xbox Live, it’s fine.

It’s undeniable that the TEW-654TR is a feature-packed router, and it’s the price-point that impresses me quite a bit. Desktop wireless routers can be had for around $40 most often, and while this costs a bit more, it’s far smaller, offers a ton of features, and has the above mentioned client mode that is sure to come in handy for many people. With all of the modes covered, let’s get right to our testing results, and then my final thoughts.