To see where the TEW-654TR stands from a performance stand-point, I performed a couple of quick tests. The first is a simple ping command, where I send a ping command to our website, while the others test the upload and download speed, using my primary PC as the server. I ran tests across three different configurations, and because my primary router doesn’t support n (I know, I’m behind on things), I had to get a little creative.

The first configuration is more of a baseline, as I’m not using any of TRENDnet’s products here. Rather, I’m using the g wireless on my netbook, the HP dv2. The second configuration is the most unique. Here, I remove the LAN cable from my main PC and replace it with the router, acting as a client. Since my netbook doesn’t have an n wireless card, I used TRENDnet’s TEW-624UB as shown on the first page of this article. This means that I’d be using n wireless between the netbook and my primary desktop, which equals improved performance.

For the last configuration, I use a wired connection just to show the differences between wired and wireless. These are here for no other reason than for simple interest. I was going to add a fourth configuration where I had the router act as a client, but the overall performance is so degraded compared to the other configurations that testing would have taken far longer than I would have liked it to. It’s clear that for ultimate performance with this router, you don’t want to have it act as a client.

Pinging the router might have been a better test, but I am a bit fan of real-world tests since people do more with their gadgets than benchmark. All four configurations in the graph below were conducted within an hour. Also, I should note that I live half of a continent away from our servers, so latencies normally hover at around 50ms on a wired connection. 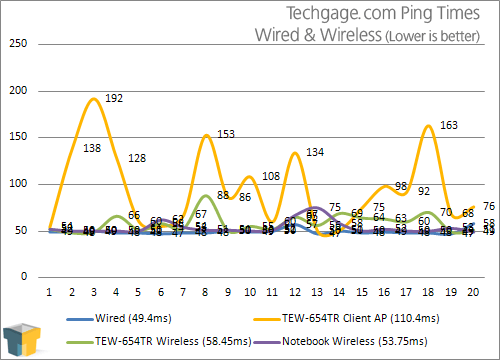 With the TEW-654TR acting as a wireless card, the overall pings weren’t horrible, but we achieved overall better performance from our notebook. The real loose pings came about when the router was connected to my main PC as a client, and then the notebook connecting to it. That’s a great solution for file transfers, but not so much for online surfing. The connection is essentially going through not one, but two wireless routers in this configuration, so the end result isn’t too surprising. 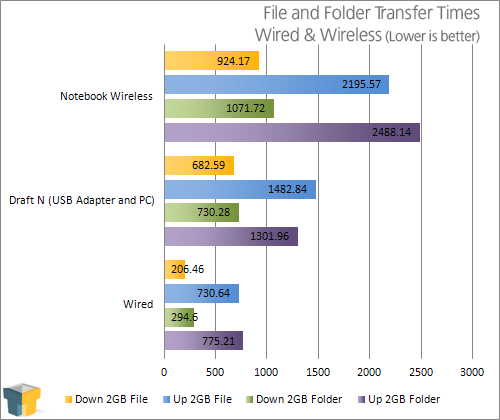 The benefits of draft n are clear, with major gains over our notebook’s g wireless. Of course, nothing can compare to a wired connection (ours was also 100Mbit, not 1Gbit), but that’s again to be expected.

I’m no networking enthusiast, but when it comes to the TEW-654TR travel router, I can’t help but feel excited. When I look at this router, I think of the old saying, “big things come in small packages”, because it details it perfectly. It’s exceptionally small, and as we’ve discovered, it’s still feature-packed, offering some functionality not even found on desktop routers (namely, client mode).

Because of the router’s size, I had figured that its pricing would be the opposite… huge. But that’s not the case at all, as it can be found quite easily for $60, or even less, at various e-tailers. For all you get, that’s a great asking price, no matter how you look at it. If it cost $20 or $30 more, I wouldn’t have thought much different, so this thing really does offer great value for the price. 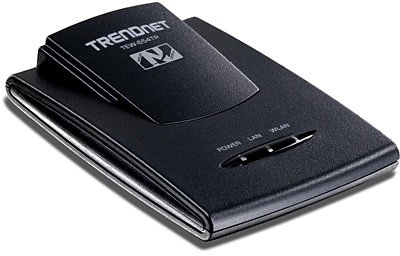 The best part of the TEW-654TR is of course its size. It’s smaller than my iPod, and really could be squeezed in any luggage you may have, no matter how full, or in a tougher situation, it could even be carried in a briefcase, or a jacket pocket. Try doing that with a regular router! Another perk is that while it gets warm after long-term use, it’s never too hot to touch, unlike some other desktop routers which could almost fry an egg.

My favorite feature still has to be the client mode, because it’s useful in so many different situations. The performance isn’t extreme as we discovered above, but that’s not the point. It’s also understandable, as it’s a router, which is meant to pass through data, not handle it exclusively at either end. To make the feature even better, not only can you use it as a network card in your laptop or desktop, but you can use it as a “Client AP”, meaning that while it acts as a network card, it will also allow connections from others. This feature will come in handy where a hotel only offers wireless connectivity and you have more than one person sharing the room.

Simply put, the TEW-654TR from TRENDnet is a superb product, and I couldn’t want to award a product an Editor’s Choice much more than this. The price is right, the features are better, and the size just can’t be compared. Looking for the perfect gift for that frequent traveler in your life? You just found it.