Where routers are concerned, TRENDnet may not be the first name to come to mind, but their popularity is quickly growing. On our test-bench is a perfect example as to why that’s the case. If you are looking for a feature-rich N-based router for a reasonable price, the TEW-633GR is worth a look.

Like in our TRENDnet TEW-631BRP review, we are using the same .iso file that we have used in all of our other transfer speed tests. This file is a Windows XP Pro image of my original install disk. Using the TRENDnet TEW-621PC wireless N PCMCIA adapter, we used our test machines to get to the numbers that we are trying to get.

In our tests, we take the test file and upload it to our desktop machine and then grab it and bring it back to our test notebook. This is done 3 times for each and an average is determined. The machines used in our tests are: 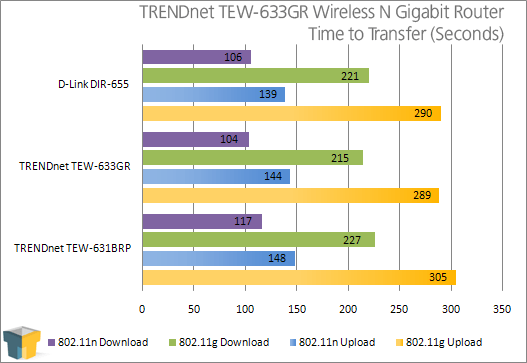 Looking close at the graph, we see that the 631BRP was slightly slower than both of our other work horses but not by much. The D-Link and TRENDnet 633GR both traded off on performance wins with the 633GR winning by a few seconds in all but the wireless N upload speed.

As for the range of the 633GR, I was able to navigate throughout my home without any signal cuts. There were signal drops but I never once lost connection. My office is in the middle of the house on the first floor and even with it surrounded by rooms, I was able to walk around the house and even outside without any problems. Walking down my 200 foot driveway wasn’t much of a task for the 633GR either as I still had connection in the road.

I know these are far more extreme of tests than most will subject this router to but rest easy knowing that it has the power to reach out and connect to your device regardless of location… within reason of course.

As much as we liked the 631BRP from TRENDnet that we looked at last week, it really didn’t do anything for us outside of being a functional router. It was ugly but functional and limited with its 10/100 base Ethernet ports. Taking all of that into consideration, the little blue router that could won us over with its relatively small price tag of under $70 for a wireless N v2.0 router and its wireless N performance.

It seems that TRENDnet knew the limitations of the 631BRP and built the 633GR to address those shortcomings. With its sexy design and LAN ports capable of gigabit speeds, the 633GR is a force to be reckoned with and given the huge popularity of the D-Link DIR-655, performance numbers show that the 633GR is just as good and can found online cheaper than the offering from D-Link.

As it turns out, the D-Link and the 633GR share the same innards as well. Thanks to our friends over at Small Net Builder, they found that the interior of both routers is the same. This would explain our almost dead even performance numbers. Basically what I am getting at is that you can have an established name brand router’s performance from the lesser known company for a little less cash and three times the warranty.

Not a bad showing from TRENDnet and as we finish this up, we are eagerly waiting for our dual band routers from both companies to come in so we can see how the next generation of models from each company stack up. With everything considered, the TRENDnet TEW-633GR earns a 9 out of 10 and an editor’s choice award.

With its longer warranty and slightly lower price tag (depending on where you find it online, sometimes the D-Link can be had for cheaper) the TRENDnet router deserves to be on your list of potential upgrades if a network overhaul is in the cards for you. If you prefer a specific company, I am not going to tell you to switch what you’re comfortable with. What I am saying is that this TRENDnet router stood toe to toe with the home networking giant and came out on top in most of the performance tests. Not a bad showing from the small guy.