The software provided is purely for extended functionality. As the BLACK mouse uses a standard HID compliant driver, it is not required of you to install the software to use the mouse.

Being a gaming mouse, the user interface reflects this and is rather graphic heavy, meaning your first use can be a little bewildering. All icons have a tooltip overlay and much of the graphics make sense, so any confusion should be short-lived.

The initial interface allows you to make changes to the main buttons. Unlike some other mice, all buttons can be programmed. The usual array of actions can be configured, like cut, paste, undo, save, etc, as well as a macro key, which we’ll get to later. The inclusion of a timer is a little strange, but it’s meant to be used by the user for anything it might be required for.

There are three profiles that can be saved and switched between instantly within the software. The limitation is that these cannot be changed on the fly due to a lack of a dedicated profile switch or action that can be assigned to a button.

The lower three buttons in the main interface control profile saving to file and to the mouse. Saving to the mouse was a bit of a surprise since there is no indication about memory made available in the specifications. There are limitations to what can be saved directly to the mouse, though; the currently active profile, the configured DPI settings and any macros saved to specific buttons. While reading the documentation and the box features, it makes out that the DPI settings were fixed at 400, 800, 2000 and 4000 DPI – the big gap between 800 and 2000 was a bit extreme for me and I couldn’t see an immediate way to change it. It turns out that these options are hidden away behind the advanced settings (I’m too used to easy access DPI settings via other software). Swapping between the DPI modes, you can change the X and Y axis sensitivity for each mode in steps of 100 or by dragging around the red indicator on the graph. Double click, scroll speed and OS sensitivity can be changed as well, but no option for acceleration.

Another surprise was the option for enabling 1000Hz for the USB poll rate. Again, in the specifications, it only lists 500Hz, so maybe a firmware update changed this, even though the software still indicates version 0001. The BLACK is capable of the full 1000Hz poll rate as checked with the DIMR tool, reporting at >900Hz or <1.11ms during most use.

The macro editor is tied to setting a macro key; there is no other way to access it for small adjustments or to load the same macro onto a different button in a different profile (they must be recorded each time).

Macro lengths are limited to about 40-45 actions, depending on what actions are performed, but since it records both down and up key presses, this cuts the total key press count in half. 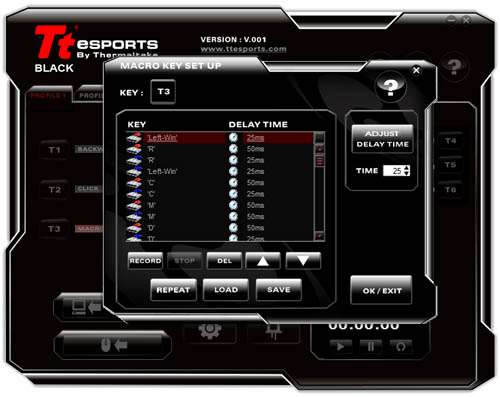 The macro editor will only record key presses and actions while the software retains focus. Switching to another application and recording will not work, so all actions must be performed within the macro window. This does have the side effect of making any [win] key presses useless since as soon as any win key based commands are entered, the macro editor will lose focus.

The good news is you can still sort of make them manually by hitting the win key to record the up/down event, selecting the editor again, continue to record, then move any win key events between the up/down event. Recording too many events will result in the above error. The good news is that it’s on a per button basis, so you can program all 6 buttons with macros with 40+ events each should you wish.

Editing macros is simple enough. You select an event, then press [del] to delete, and hit delete again to clear the entire macro. You can also mass select events and delete simultaneously. You can append the macro at any time by hitting record, perform actions, stop, then use the up and down buttons to move events through the action list (all recorded actions appear at the end of the macro). The limitation is that it’s tied to single actions at a time, you can’t move blocks of actions.

All times are recorded to the nearest 25ms with the ability to change the delay later. You can not manually insert a delay though, but could build up a list of long [ctrl] or [shift] events to introduce delays without action.

There are strange quirks with the software though when transferring or unplugging the mouse. If you save a macro to a button, save to mouse, close the editor then open it again, you can see and edit the macros just fine. If you unplug the mouse, even with the macro saved on-board, plug it back in and then edit the macro, it will be blank, even though it will still perform the actions.

To get around this, you’ll need to save the profile to the computer, then load it again; this should allow you to see the macro again. It does mean that if you have the software on two computers and want to edit a macro after switching, you’ll be left blind without loading the profile – more of a nuisance than anything else.