At $45, the Tt eSPORTS BLACK gaming mouse is up against a very tough crowd, and just by features alone, there are much cheaper mice with more buttons and just as capable software.

The Mionix NAOS has a 5k sensor and 7 buttons for $47; the Logitech M705 wireless with a 3 year battery life, 8 buttons and a very comprehensive software suite costs $40 (though not gaming); the Cooler Master Storm series have similar pricing, are gaming-orientated and equal if not better feature sets.

It will come down to personal taste in the end, as always, but compared to the competition, the BLACK’s price is a little steep.

The inclusion of the Phillips sensor (yet again) causes issue with diagonal shifting with pick and place movements – but remains accurate otherwise. We may bash the sensor a fair bit here at Techgage, but it’s a valid concern. So many mice in the gaming sector make use of it, probably due to a lack of a real alternatives. While supposedly, the drifting can be fixed via firmware, I have yet to see a mouse implement it.

The Teflon disc under the sensor serves little purpose, it collects dust, clouding the sensor, and can scrape against the mouse mat, so it’s best to remove. The other Teflon feet are more than adequate at providing easy gliding for the mouse. Since this is the second mouse I’ve used that has this disc under the sensor, I do wonder what it’s real purpose is, apart from to provide additional gliding. 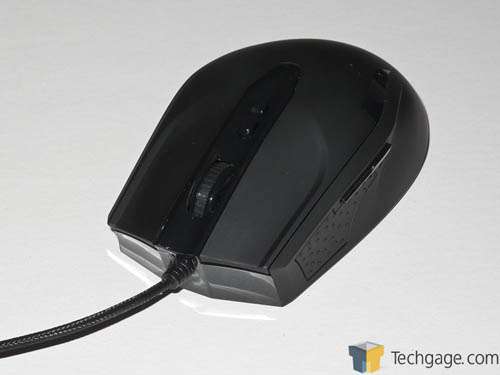 The 6 button configuration is still a little odd, it wouldn’t be too difficult to switch to 7 buttons since the thumb button is quite large. The top-mounted DPI buttons can be reprogrammed, but the lack of a DPI cycle function rather than separate up and down DPI functions means that you can’t recover one of them for another function, like profile switching on-the-fly, which again, is not included.

The software provided works very well; the macro editor, despite the unplugging issue mentioned above, is actually very functional. It would be nice to be able to move blocks of actions in a macro instead of one at a time, but this is minor. The inclusion of a profile switch function would be appreciated, but due to the lack of memory and that realistically, only one button can be programmed without losing standard in-game buttons and DPI control, a profile switch would add little extended functionality.

The Tt eSPORTS BLACK gaming mouse is a functional piece of equipment, but for the price point, it comes across as rather basic in terms of hardware functionality. There are discrepancies with the documentation, like the inclusion of on-board memory, 1000Hz poll rate instead of 500Hz, and adjustable DPI settings, rather than fixed. These are all good changes though, so one can’t complain. It’s just for $45, I would expect a couple extra buttons.