Similar to many other gaming keyboards out there, Thermaltake has chosen to situate the macro keys to the side, rather than keep them above the F keys. Even further, there are five macro keys on each side, with is appreciated since it minimizes the width of the left side.

I don’t personally like macro keys to the sides, because I am far too used to the Ctrl and other keys being at the left-most part of the board. When macro keys are shoved in there, I find myself often having to slow down or look at the keyboard to find the Ctrl and Shift keys, and even after more than a week of straight use, I still haven’t completely gotten used to that. 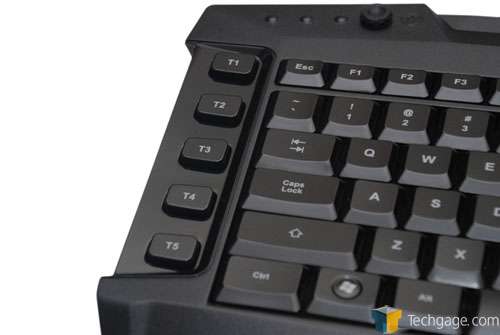 On the opposite side of the keyboard, you can see the numpad and some multimedia keys up top. As far as layout goes, I’ve found nothing wrong with where the keys are located, but I do have some other concerns I’ll talk more about in the final thoughts section. 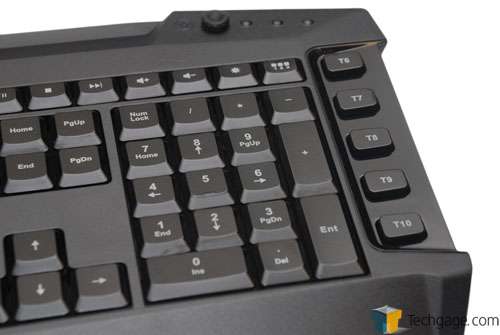 The status keys are up top, and if one of them is lit up, a red LED circle lights up beside the respective icon. The status icon to the right represents the current macro profile, and rotates between red, green, blue and purple. 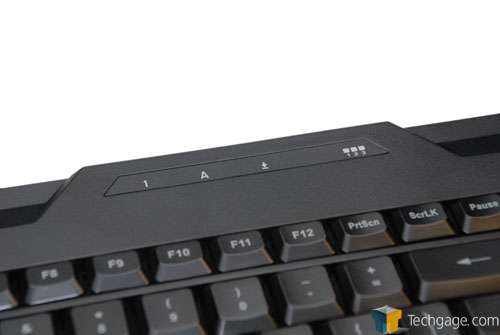 To make transport easier, Thermaltake doesn’t preinstall the USB cable on this keyboard, but instead allows you to install it manually. It seems like a bit of an odd choice, but it doesn’t really seem to have a downside, so I have no complaints. At the rear of the board, you’ll have access to two USB 2.0 ports, and also be able to store the board’s fan in the empty compartment there. 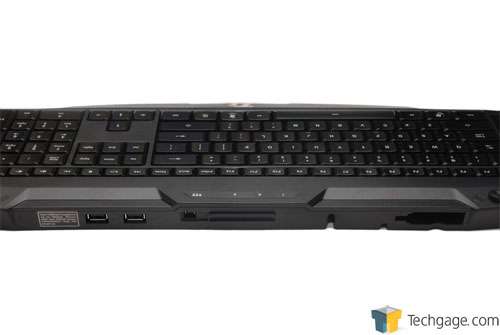 Yes, I did! In an interesting twist to the typical gaming keyboard, Thermaltake has bundled a super-small fan that mounts in either the left or right side of the board that aims to keep your hands dry during intense gameplay. Though small, the fan doesn’t whine at all, and as you might expect, it’s not all too powerful either. 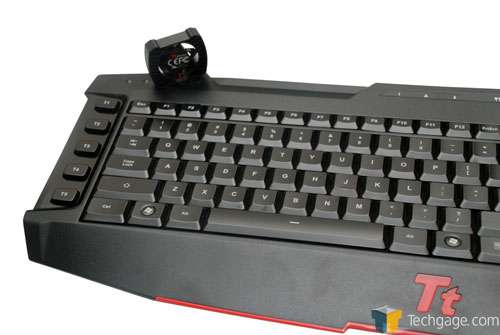 This is one of the flattest keyboards I’ve ever encountered, which is a +1 in my book. It can be raised if you like with the help of two durable legs. To the left of the right leg in the photo, you might notice the mouse cord holder – another plus. I have a couple of mice that either have heavy cords or just keep rubbing against the edge of the desk, so being able to secure the cord is nice. 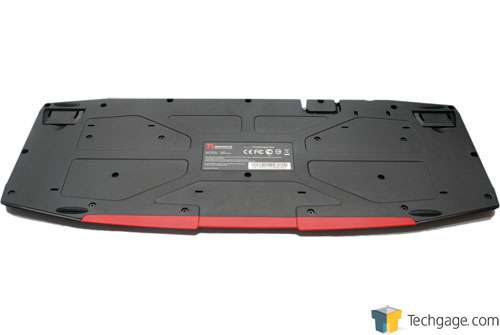 In way of accessories, Thermaltake bundles in eight extra keys (the color isn’t the only change… the surface is a bit rougher, and was preferred by me), a key remover ring, the fan, a manual, USB cable, and a couple of “Windows Key Blockers”. What’s that, you ask? They are simply flat pieces of plastic that can replace your Windows keys, so as to prevent accidental drops to the desktop while in a game (frustrating, to say the least).

I’m not sold on this implementation personally, because there are better options out there. On GIGABYTE’s K8100 we took a look at a couple of weeks ago, there’s a quick switch that allows you to disable the keys entirely. That to me is a much better solution, and a better-looking one as well. 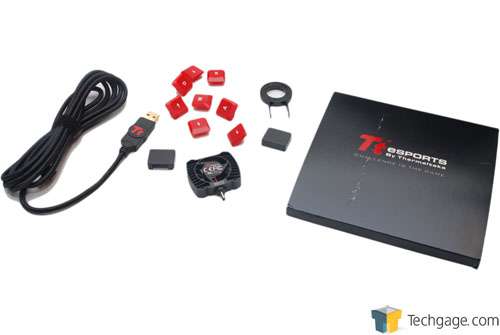 The photo below shows off a couple of different things. First is the key removal ring, which allows easy removal of any key. You simply push down on a key with it, pull up and it’s out. The below photo shows off the key style used here. There’s no real mechanism… you push down in the key and it pushes down on a piece of rubber which touches the PCB to activate the key. I am not really against this kind of implementation, but I really like quiet keys as well, and don’t particularly need the tactile feedback enabled by other solutions. 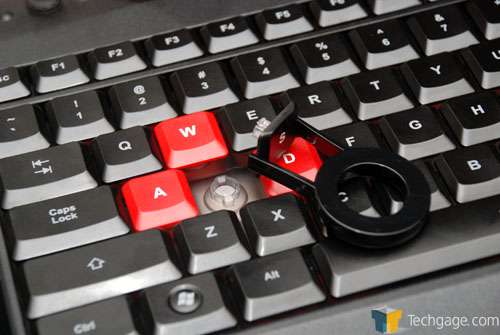 Since I’ve seen this keyboard on multiple occasions throughout the year, nothing really came as a surprise, but that’s not a bad thing. The design overall is good, but not perfect, and I’ll tackle all of those points on the final page of the review.