Being that this is Thermaltake’s true first crack at producing a “professional” gamer’s keyboard, the company has done a lot of things quite well. For one, the Challenger Pro simply looks good. It’s almost completely black, features backlit keys, and is comfortable. If you are a gamer that thrives on stiff tactile feedback, though, this keyboard isn’t for you.

The Challenger Pro and also Challenger Ultimate (to be released) offers a lot of frills that some might consider to be gimmicky, and in some cases, I could agree. The fan, for example, never did too much for me, as it’s just not that powerful. Even in still air, the breeze from it is hard to feel, and though it is noticeable when your hands are sweaty, it didn’t keep mine dry.

The problem here is twofold. The reason the fan isn’t too powerful is because it’s small, and if it was larger, say, 50mm+ or even leaf-blower style, chances are good that your skin would get super-dry over time from the constant flow of dry air hitting your hands. The other problem is that it’s not my fingers that ever got sweaty, but rather my palms. Gimmick? Perhaps, but being that the keyboard is priced at $70 alongside a lot of competition, it’s not as though it results in a price premium, so it might be appreciated by some gamers. 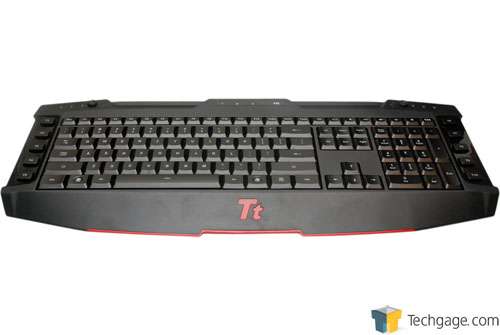 The additional keys could be considered a little needless as well, but I don’t believe that they are. The original WASD and arrow keys have a glossier kind of finish, while the red keys have a more defined texture, which I like. Chances are good that you will prefer one or the other, and if it’s not the red ones, then you don’t need to change them.

I also liked the fact that the keyboard was completely flat on the bottom. I don’t remember the last time I ever touched a keyboard like this, but it seems to be rare. I also appreciated the addition of a mouse cord routing feature since it does do well to keep your mouse from falling off the desk or moving when you are not touching it.

I like the Challenger Pro quite a bit, but there are a couple of issues that I must mention. While I like the layout of the keys, I am not über-excited about the macro keys being on the left and right sides. I prefer those to be on top so that I don’t accidentally hit one instead of Ctrl or Shift. Even after a week of using this board, I have to slow myself down to make sure I’ll be orienting my hand properly. 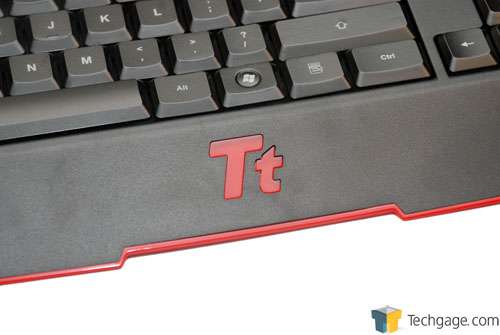 I would have also preferred far better spacing of the top row of keys as well. As you can see in the top-most photo on this page, there is no spacing at all between the F keys or any other for that matter. That to me is a concern, because if you play a game where F keys are regularly used, you are likely to have to actually look at the keyboard to make sure you are hitting the right one, and when in the heat of gameplay, that’s not good.

This isn’t a problem on other keyboards because there are three sets of F keys with a healthy space in between each. They helps you find any particular F key quickly, and without looking. But here, they all flow right into each other so the only option is to hit a key and hope for the best, or look away from the screen. “Print Screen” for me was also a chore to use, since again, it’s in the same row.

Aside from the physical attributes, the software and macros didn’t do too much to impress. The program itself is a little finicky, but I do like the fact that it’s simple. The biggest problem for me is the lack of being able to create lengthier macros. I haven’t taken a stab at a gaming peripheral for as long as I can remember that limited the number of actions to just 20, so it caught me by surprise here. For some gamers, it might not matter, and you should know if it would affect you or not. If you are someone who likes to create grandiose macros, the Challenger Pro is not for you. Not now, at least. Nothing says Thermaltake couldn’t improve this in the driver later on. However, I do think the 64KB of on-board memory is the biggest throttle here.

Despite the issues, I’m still pleased for the most part with the Challenger Pro, but I do think it could have been improved quite a bit with the help of some small changes. For the price, this keyboard is very attractive, and I’d recommend it if the cons I mention below don’t affect you.