Tt eSPORTS – the professional gaming brand of Thermaltake, brought about a large collection of peripherals to the ever growing gaming market when it launched last year. At the end of November, we reviewed one of the first products in the series, the Challenger Pro keyboard, and came away rather impressed. Under review today is an entry into the extremely competitive gaming headset sector, with the Shock.

The Shock series encompasses three models, starting off with the plain Shock, moving up to the Shock Spin, and finally the Shock One. Each one adds extra features such as a larger driver and USB support.

The Shock is the ‘basic’ model as it were and starts pricing off at about $60. This seems to be the upper end of the mainstream price bracket and has a lot of competition, so let’s see how it holds up.

Starting off, the box – everyone likes a good, well styled protective delivery mechanism and the Shock doesn’t disappoint. I’m a sucker for red and black and this is a well presented package. While still ‘boxy’, it conveys style quite well, definitely appealing (assumed) to the gaming market. 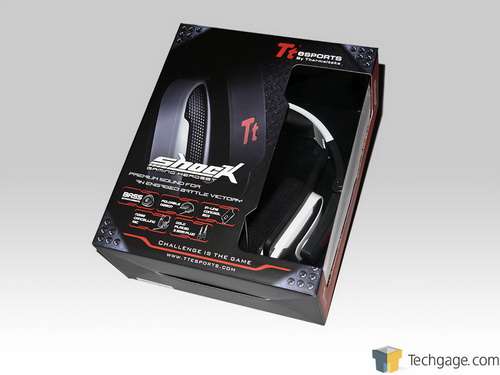 Taking the headset out was a little bit of a fiddle, with the in-line volume control getting stuck in one of the gaps – brute force and ignorance to the rescue. Included in the pack is the headset along with a protective bag – a common gesture with Thermaltake these days, for carrying gear to LAN-Parties. 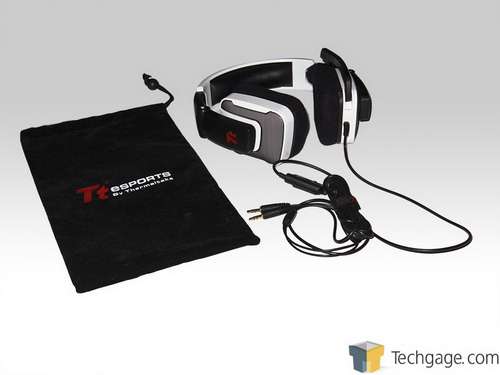 The Shock headset is actually quite aesthetically pleasing. There are two color versions available, black and white, the latter under review today. The white is of the glossy variety with mesh plates on either side of the headset. 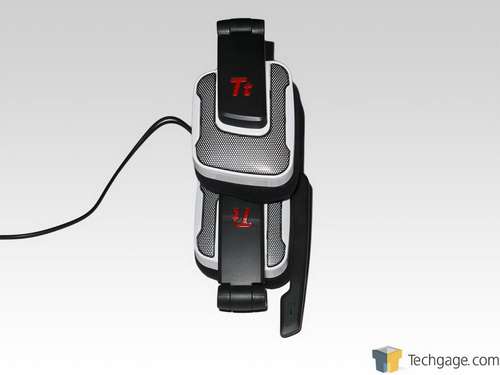 White glossy plastic is rarely seen outside of the Apple ecosystem, but it’s nice to see it creep into the PC market for a change (such as with Corsair’s 600T case as well). 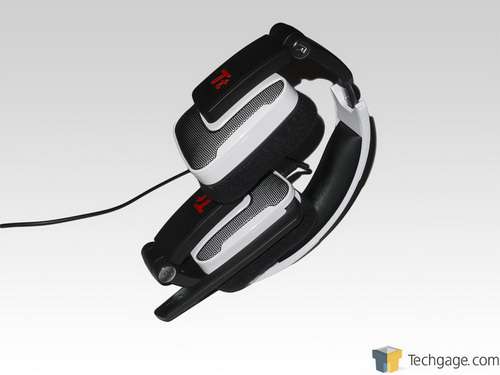 The design allows it to fold in on itself, for easy storage and to put away in the provided bag. The head band needs to be fully extended on either side in order for the cable to not interfere or catch on the headphone.

Hit the next page as we cover some of the features including the in-line volume control and replaceable ear pads.