The Shock headset was put through a wide range of tests, to see what kind of sounds can be squeezed out of it. The drivers have been tuned mainly for gaming as the audible EQ curve will make rather apparent.

Favouring bass and the lower midrange, it pushes ambient noise, footsteps and explosions down your ears, but it tends to drown out everything else. This curve makes sense for gaming, but for anything else, it can be a bit of a problem to tame.

Music really does suffer as a result and requires some very aggressive EQ adjustments to bring some life and warmth back. The low end bass has been pushed quite a lot but it drowns out the rest of the bass range, meaning lots of boom without much definition – the typical ‘sounds impressive’ EQ curve.

The treble and upper mid-range are quite understated, and need a good boost to get anything out of them. The headset is quite capable, but the native tuning does make it a bit of a hassle to get right.

When it comes to dialogue in movies, it can be a little quiet, depending on the movie. The heavy bass push does mean that voices can be a bit heavy and meld into the background.

When it comes to games though, the Shocks do fine. Footsteps are audible, bass is thumping away but a bit over powering. The zip of a bullet can be a little quiet though, due to not enough treble. 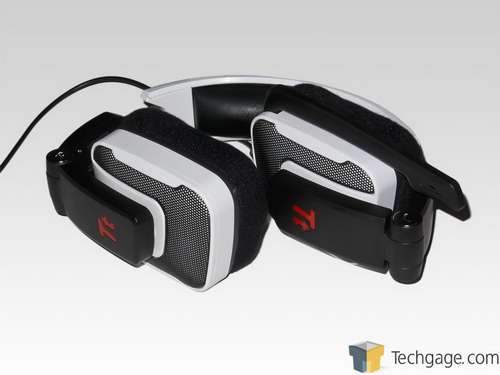 The headset has a very pleasant design, it’s not too overpowering but it certainly looks like a gaming piece. Style and audio for that much, are always subjective. As stated earlier in the review, a black version is also available.

Personally, I’d splash out a bit more for some 50mm drivers for a little more definition, but with the Shock already at $60, and an extra $10 for another 10mm, I’d have to listen to them to be sure.

The Shock gaming headset is decent bit of kit, but a little too uncomfortable for extended use, and the bass has been bumped up a little too much (at least for my taste). It is built for gaming rather than music, so bare that in mind. As always with these subjective tests, try before you buy, if you can.