If you have an Xbox 360, then chances are good that you have partook in some Xbox Live action. According to some recent reports, over 60% of people who own a 360 are online, so it’s a huge market and one that welcomes supported periperhals.

When I picked up my console at launch last year, I loved it. The system was great, made it easy to get online and most importantly, the games were fun. However, one thing that struck me as odd was the included headset. They are junk, and I am sure there are not too many people who would disagree. They are flimsy and have very sub-par sound. Coupled with the fact that you only hear the game out of one ear, that seriously detracts from the gameplay experience… you should be experiencing.

Turtle Beach released their X2 headset earlier this year, and as of now, I regret not having heard of it until just now. Yes… I love this headset. It has a few downsides, but I will get into all of this later.

The X2 is primarily marketed as an Xbox/Xbox 360 headset, but it can be used for other audio equipment also. Actually, I see no reason why this would not work with any of your consoles, due to the way the installation is performed. What sells the X2 are three primary reasons: 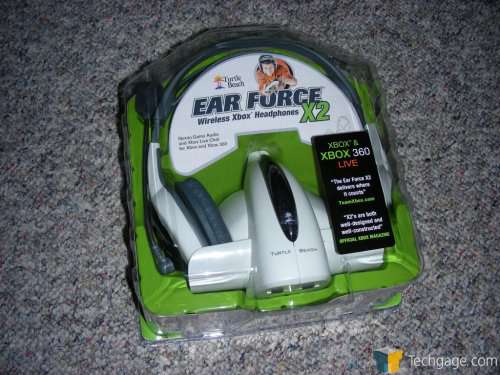 Game Audio & Xbox Live: Instead of hearing sound through a single earpiece, you will hear it in complete stereo. You will hear both the sound from the game, and also the speech. This in itself is one of the -best- reasons to pick up the headset.

Comfort & Quality: Self explanitory… these are comfortable headphones and not flimsy. Built to last… at least hopefully.

Late night gaming! No more pissing off your family when you blow up someone in the middle of the night. Even though you will hear everything your game has to offer, people around you will hear nothing.

Surprisingly, they don’t include the fact that these are wireless in their three-point guide. However, that’s another great feature for very obvious reasons. The only wire you will have to deal with is the headphone, if you wish to use it.

The X2 arrived in a huge plastic blister pack, which was hardly fun to open. I immediately grabbed my box cutter and spent 3 or 4 minutes tearing it open, making sure not to slice a hand off. Once opened, you will reveal a manual, ac adapter, cable extenders, microphone cable and some batteries. 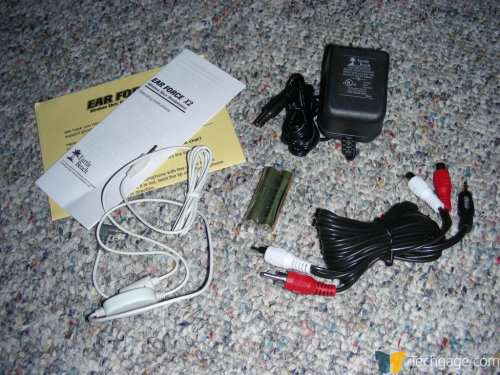 The receiver base… is ugly. If you don’t agree with me, that’s fine. It looks more like a piece of abstract art than a headphone holder, but whatever. This is -not- a charging base either, so you will need to replace the batteries in the headphones whenever you have some die. The front dim piece of this base lights up with a few LEDs to let you know the connection to the headset is good. 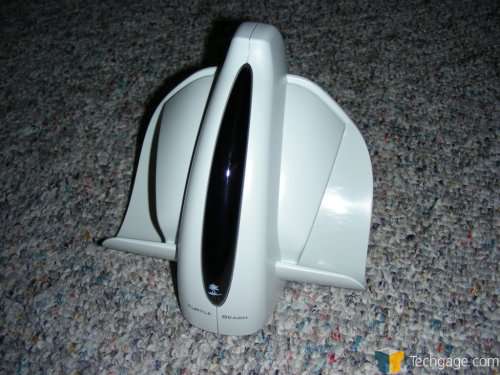 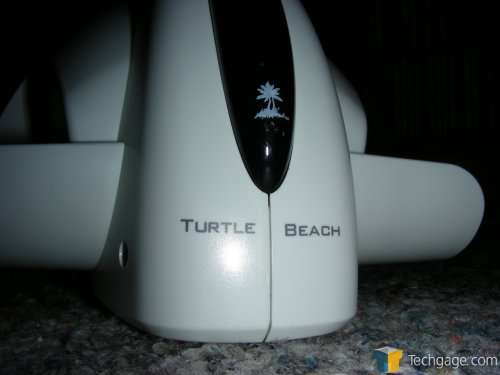 On the back, we have input level and power port. For use with the Xbox 360, it’s recommended to use the Low setting, because by default the console will spit out some incredibly loud sound… and you don’t want it to do that when you are wearing the headset testing it out for the first time. We can also see here the the wireless is accomplished via infrared. 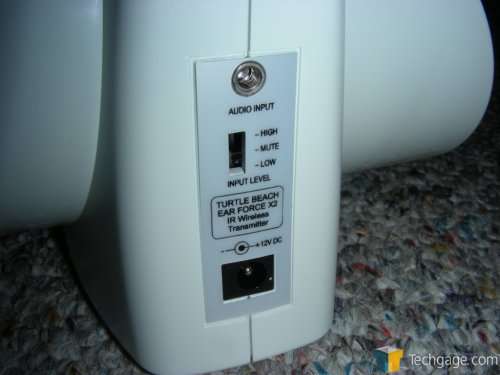 I have no complaints about the headset itself… really. The design is good and rather comfortable as I had hoped. The earpieces are well padded, and the strap at the tip is comfortable enough so that its not even noticeable. 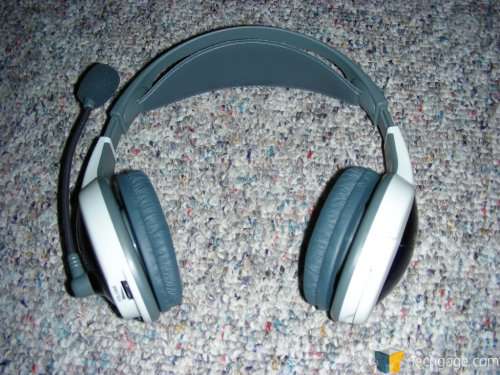