Here at Techgage, we tend to focus on the gaming aspects of the PC industry. While true, we do concentrate a lot of time and energy into this section, we are true techies at heart and in saying that, we admit that we love almost everything tech. Our reviews in the past confirm this as we have taken looks at routers, home audio equipment, software and the occasional gadget and this is all in the two years that we have been around.

In that time however, we have only taken a look at one notebook. Back in November, Rob took a look at the ASUS Lamborghini VX1 and for the most part, he liked it quite a bit. Today we have the second notebook to come through our labs on the bench but donâ€™t expect anything glamorous about this one. For what the Lamborghini was to style and multi-media, this notebook is to productivity, durability and hard nosed work.

Today we are working with the Twinhead Durabook D14RI. Having been in business for just under 20 years, Twinhead knows a thing or two about the notebook business. Their popular line of durable notebooks, aptly named â€œdurabooks,â€ has forgone sleek lines and thin cases for a more rough and tumble image. Armed with a magnesium alloy case, which Twinhead claims is 20 times stronger than ABS plastic, the D14RI is built for those of us who arenâ€™t as careful with our investments as others. Suggesting that the D14RI can survive drops from a reasonable heights, as well as occasional liquid spills, Twinhead has a lot of promise.

Can the D14RI live up to these expectations and provide us the state of mind that one would need if they were worried about breaking their laptop? Aside from that, how does it perform? These are all questions that will be answered over the course of this review.

Coming to us in the retail packaging, the all blue box stands out. While nothing is terribly special about the packaging of the D14RI, the notebook was shipped in a secure, well labeled package. Notice the three small blue, orange and red squares on the front and top of the box. These hint at the strengths, and ultimately the major selling points, for the notebook itself. Twinhead is marketing the Durabook line of notebooks towards the people on the go that need a durable notebook that can survive the occasional mishandling. 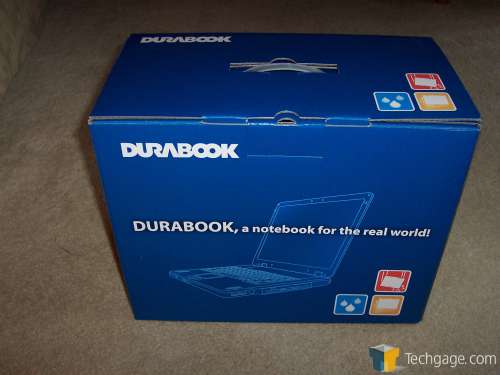 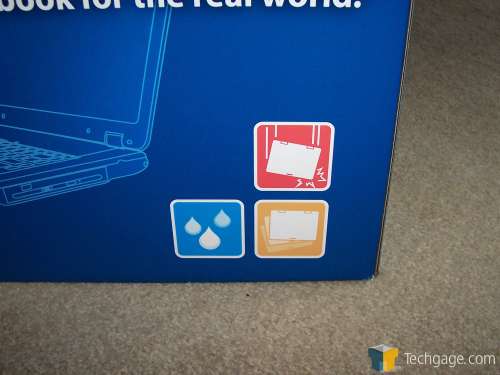 The D14RI is securely placed in the box between a pair of foam inserts. These hug the Durabook on either end allowing no movement while in shipping. 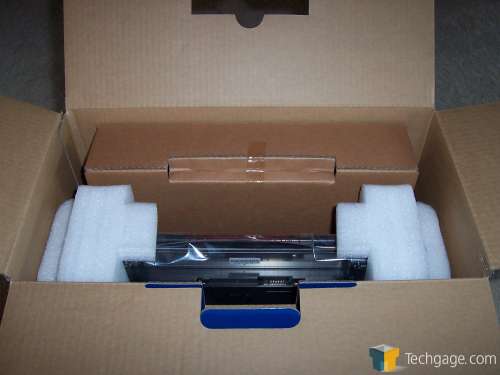 Included in the box is the battery, a few CDs, the power brick, documentation and a phone cable. Of the CDs included, there was not an OS disk in the box. Odd but not a mistake, the D14RI did not ship with one. 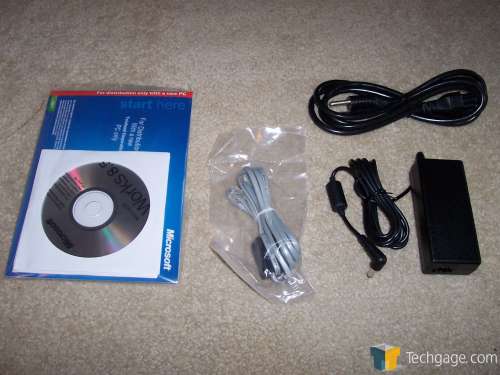 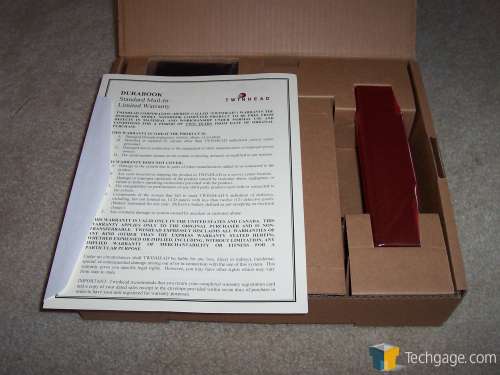 Once out of the box, we see the D14RI in all its 14.1″ sized glory. The first thing I notice is the rather attractive carbon fiber look to the top of the case with the four rubber/plastic corners. With only a 14.1â€ screen, the D14RI isnâ€™t exactly the largest of notebooks but when taking into account the market that they are shooting for, the size is well appreciated. The height of the laptop is decent, at 1.7â€, and with a weight of roughly 6 pounds (with the 6 cell battery), the D14RI is certainly portable as well. The overall design of the notebook isnâ€™t anything to get to worked up over, but it nice and to the point. 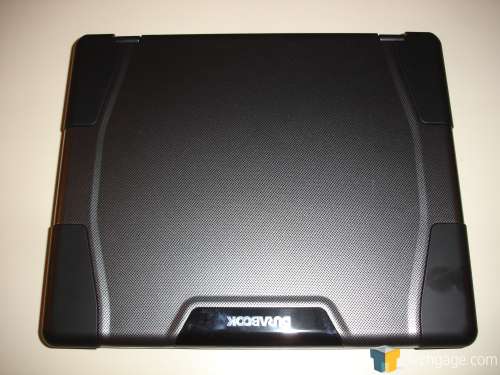 Once open, we see the XGA 14.1â€ LCD display and a sticker proudly proclaiming that this notebook was assembled in America. Aside from that, the open notebook appears to be a standard laptop with a regular keyboard layout and the standard lights at the top to show battery status as well as HDD activity. The touchpad is a standard touchpad but also has rocker switch that works as a scroll wheel would. Just above the touchpad is a standard 85 key keyboard as well as a pair of buttons. The power button is silver while the green button enables, or disables, WiFi. By default, WiFi is disabled when the notebook boots up. 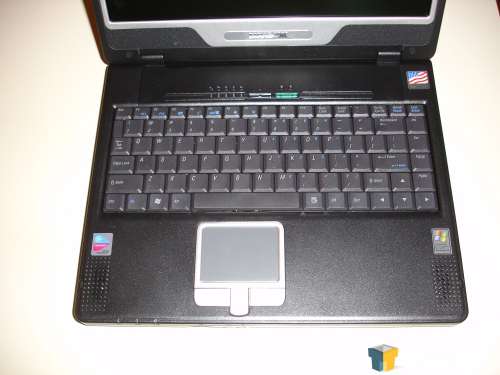 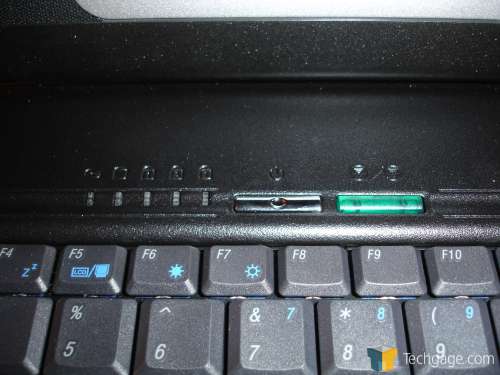 The keyboard itself, as stated earlier, has 85 keys, and is as solid of keyboard as any I have worked with. The key response is crisp and the overall feel of the board is comfortable. There isnâ€™t much travel in the keys and it doesnâ€™t take much force to push them down. Sound isnâ€™t an issue with the D14RI either. There is little to no noise produced by typing on the keyboard. 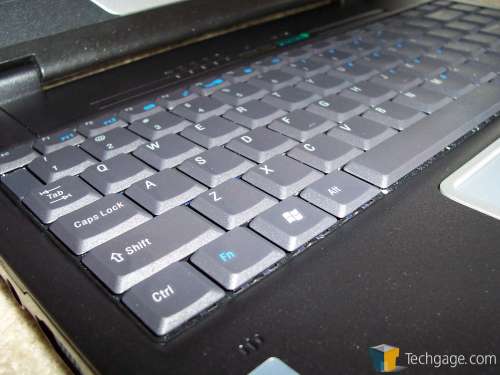