As we make our way around the notebook, we see the Durabook provides standard connectivity. Starting out in the front, there is just a pair of audio jacks, color coded for output and microphone, as well as a volume wheel. Around the corner, on the right side of the notebook, there is a pair of USB ports, a 56K modem, a CD-R/W / DVD-R/W drive and a serial COM port. 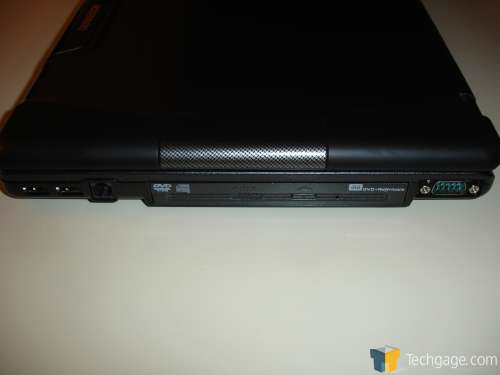 Along the back of the notebook is where the battery resides. There are no connections here. The D14RI uses a 6 cell 4400mAh Li-Ion battery that attaches easily into the back. 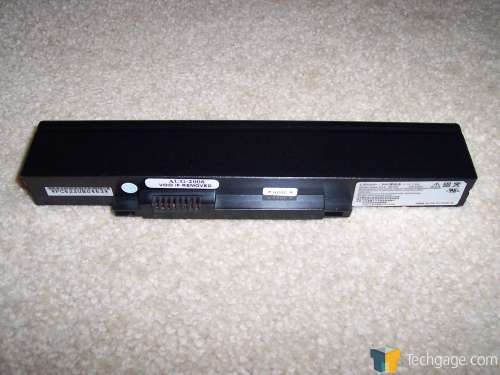 On the left side of the notebook, there are lock hole, a power adapter connector, VGA out, 10/100 Ethernet and a PCMCIA slot. One thing to notice is the placement of the power cable. Compared to what I am used to, this is an odd place to put this connector but even with the notebook plugged in, the cable is not that annoying. I would prefer this, as well as the network cable, to be in the back of the notebook but this is something that we all can live with. 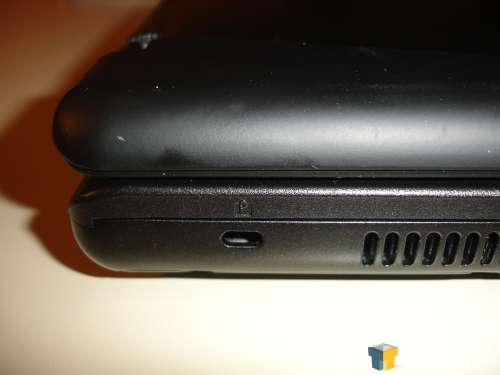 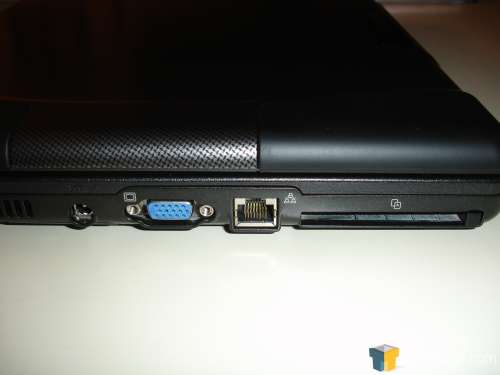 Now that we have covered the exterior of the D14RI, lets get into the inside. While not having specs that would make anyone drool, the Durabook isnâ€™t any slouch either. With a single core Dothan Pentium-M, the hardware certainly is starting to age but this notebook was not built with gamers in mind and the specs in the notebook are more than enough for email and office use. Letâ€™s take a look at the Twinhead provided specs. 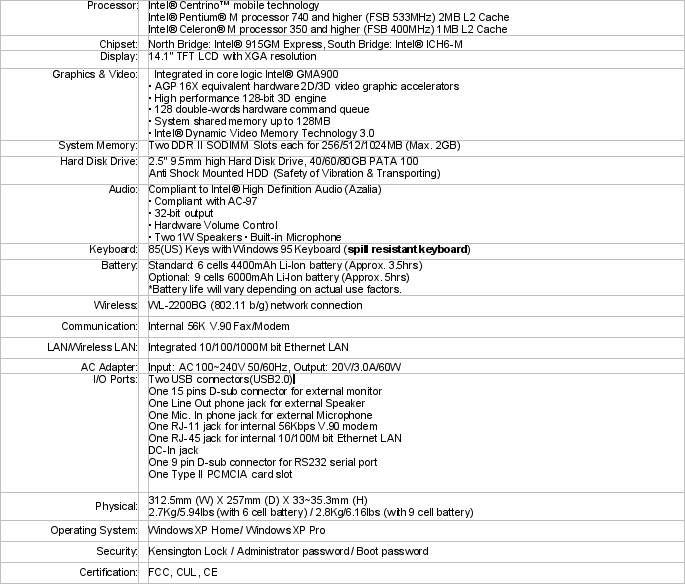 While these wonâ€™t know anyoneâ€™s socks off, as stated earlier, the D14RIis more than enough for the market that Durabook is marketing this notebook to. With integrated graphics, there wonâ€™t be many games being played on it but we were able to get reasonable frame rates in Warcraft III and Rise of Nations. With this not being a gaming notebook, we didnâ€™t feel the need to test out any more games than that. However, in the next tests, we will actually see what the D14RI is all about.

Twinhead is marketing this line of notebooks to those on the go. People who just need a reliable notebook that can stand up to the tests of time. With these people I mind, Twinhead has set up a few parameters for testing the D14RI. We were allowed to drop the notebook onto the floor, spill water on the keyboard and shake it with all our might. While the shaking wasnâ€™t anything special, the water and the dropping tests are certainly something we were looking forward to.

To start out with, we measured the allowed 30 inches and dropped the notebook to the ground around 5 times. With the CD drive locked shut, we began to test. After each drop, the shut down notebook was booted up and tested to see if everything was in working order. After the first test, we were pleased to note that the entire system worked as it should. On the final drop, the CD drive did pop open but after shutting it, powering on the system and inserting a CD, the drive acted as if nothing had happened.

The water test was a bit trickier. We slowly poured a half cup of water over the keyboard and touchpad 3 different times. Each time, as the water ran across the keyboard, the water would run through the keyboardâ€™s drainage ducts and out the bottom of the notebook. Twice we did this with the notebook off as instructed and on the final pour, the notebook was left on because really, how many people are ever going to spill anything on a closed shut down notebook. If I were to take the D14RI to the coffee shop or library and type on it, itâ€™s going to be on.

After passing each of the tests, the Durabook D14RI has certainly gained quite a few cool points with this editor. After all of this, we are moving onto the benchmarks. As covered earlier, this isnâ€™t exactly a review, but rather an evaluation. We ran few tests on the D14RI and will report on what we found.

There is something to be said about purposely spilling a cup of water onto your notebook and dropping the thing for no better reason than you know that it can take it. While we have done these things, personal mileage may vary and not every notebook will survive this torture. The Durabook was made to survive a majority of these situations and in our tests, thatâ€™s just what it did. The design of the D14RI was classy but not incredibly moving. Just like the design, the hardware and specs are nice, but nothing that is going to make anyone take a second look. This is certainly not a LAN party machine here.

The benchmarks were less than amazing but we much keep in perspective that this machine cannot be compared to other notebooks. This is a business class notebook that I would compare to the Nextel line of mobile phones. Sturdy and tough, you know that they will always work no matter what you put them through. While we are not going to award any scores to the Durabook today, I would like to recommend this notebook to anyone who is not interested in gaming. While I would have died without the ability to play games, this is something that I would have loved to have had in college.

Hopping in and out of the bunk and throwing my old notebook in my bag time and time again took a hefty toll on the old thing and is one of the reasons that itâ€™s no longer with me. The D14RI is a notebook that I would almost guarantee against that kind of wear and tear. With all this said, Twinheadâ€™s Durabook line of notebooks is something that we all should look at the next time we are interested in picking up a notebook.