In the future, given Ultra’s non-traditional packaging method, I feel that if two wire-ties were used with one towards the top of the drive case and the other at the bottom, that this problem could be avoided when the case it subject to ‘less than loving care’ during the shipping. Fortunately, I was able to straighten the drive cage out fairly easily so it was really no harm done, but it’s still not good to have damage dealt to your new case. 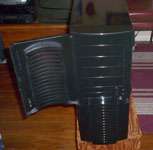 Inside the accessory box, we can find the front mounted audio/USB/Firewire ports in a 3.5" bay mounting box, which is in turn mounted in a 5.25" bay adapter. This is nice, as it gives you the choice of placement, but I’d prefer to have the front ports permanently affixed to the front of the case so I wouldn’t have to give up a drive bay. Luckily, this case has plenty of drive bays including 5 * 5.25" and 2 * 3.5". 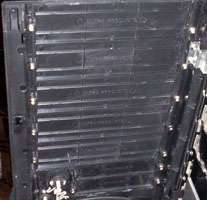 One nice thing about the case front is the fact that the entire face is hinged. No stupid tabs to try to press outwards 2 at a time, no hidden screws to try to undo with the case at an awkward angle, no hassle whatsoever. You just have to pull on the tab to the right side of the case front and open that baby up. Another nice feature are the bay covers. They’re not snap in, they’re instead held on with screws. This means that if you have rheobuses that utilize the stock drive cover as a mounting device, you will have to make certain to have plenty of slack on it to allow for opening the case. I’d consider that a decent trade off though as I’ve had to fish my rheobus out of a case more than once, and it’s honestly a pain in the neck!

There is a lack of a filter that i’d like to see addressed. I know it’s a minor thing, but considering that most cases coming out these days feature them, I consider this a bad oversight. I do however like that the fan mountings are for 120mm fans front and rear. This allows for superb airflow with minimal noise. 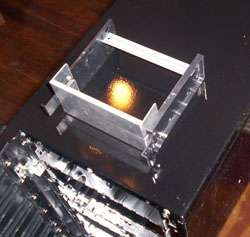 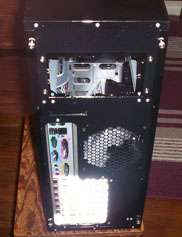 The 3.5" bays have a nice feature that allows you to pop the entire bay out of the case for mounting the devices you may have, whether they’re floppy drives, card readers, temp monitors or even the included front bay box that comes with the case. Handy :-)