The rear of the case is different from most others I’ve ever used, because the rear is actually painted to match the rest of the case. This makes for a very pleasing case for using on top of your desk, and yes I know that most of us never look at the back of our cases! If you LAN often, at least the guy sitting across from you will have a bit of aesthetically pleasing scenery rather than bare metal whenever he’s between rounds of <insert favorite FPS here>.

I apologize for the glare from the PCI slot covers, but they are the shiniest pieces of metal I’ve ever seen attached to a case in my entire life. Another thing worth noting is the rear fan grill. Normally the rear fan grilles are these horrid little punche metal affairs that hinder airflow by offering the air less than 50% area to escape. That’s not the case here, no pun intended. Here, we have a very open honeycomb grill that actually offers about the same resistance to airflow as a basic wire grill. This is a very nice departure from some of the other cases I’ve worked with. I wasn’t forced to either break out with my Dremel or put up with less than optimum airflow. 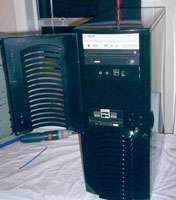 I’m not going to go into tedious build details, but instead show you some shots of the finished system. I used a donor system for the testing here, since my personal rig is watercooled and the benefits of the improved thermal design of this case wouldn’t do it justice. The donor system consists of my old LAN rig which is now my sisters PC. The specs are as follows: 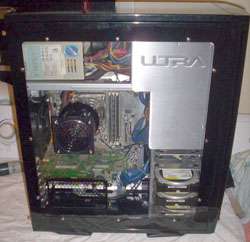 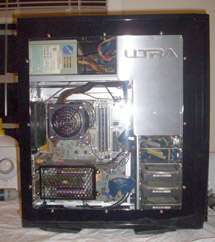 As you can see here, the finished product came out looking pretty nice. The HDD mounting allows for putting the connectors on the offside of the case, giving a cleaner view of the front of the drives, and also allowing the bulk of the cables to be neatly hidden from view. One thing though, if you have really long cables, you might want to go get some shorter ones because as you can see from the second shot, I ended up having to stuff the slack into the top two unused HDD bays. This was just so I can’t get the case side on ;-)