The case side features Intel’s newer recommended duct over the approximate area of the CPU, and the bottom portion of the case window features an exhaust grill over the PCI area. This allows the air normally bottled up by the longer graphics cards somewhere to go, rather than create a dead spot in the case and increase the static pressure on the fan in the front of the case, thereby killing airflow through the case. The payoff is that the end result is lower GPU temps. The CPU duct is adjustable to allow for taller or shorter HSF combinations. It’s also removable, (the accessory package has nuts for the screws holding the grill in place) for those users that are running non-standard HSF units.

Now, onto the numbers! 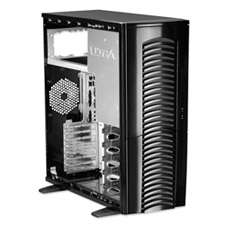 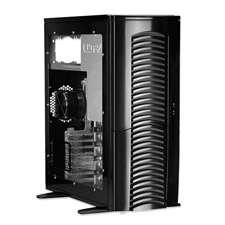 Overall this is a nice decrease in temps. The CPU is running at default Vcore and is OC’ed by 33MHz with a divider of 11x166FSB to help open up the memory bandwidth. The GPU is at it’s default speed of 300MHz, boy, I remember the days when 300MHz was blazing fast for a GPU.

In closing, I’d like to say that the Ultra Aluminus is a beautiful case, which, while being huge, is feather light. The black is hard as heck to photograph well, due to the high gloss. This is one extremely shiny case. The finish is nearly mirror like in appearance. It’s well appointed, roomy, has nice options for cooling and allows for great wiring in your PC. A minimal amount of work is all that’s need to make your PC come out looking like you spent hours hiding the cables! 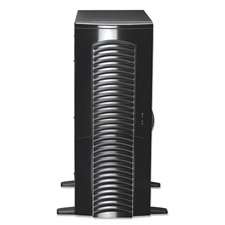 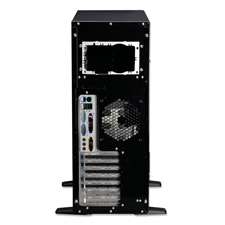 The only real negative I can name are the lack of fans, which some might consider a plus since it’s two less parts cluttering up their junk drawer’s after putting their favorite fans in the mounting holes. I dislike the lack of filters, the front ports and the way in which the accessory box is hung in the case. All things considered, I’m awarding the Ultra Aluminus a solid 8 out of 10 for beauty and features at a very reasonable price of sub $100.

If you wish to discuss the review, please do so in our forums! There is no need to register in order to reply to our content related threads.